Adelong is one of those small country towns where time has stood still. The tree-lined main street is edged by shops with quaint veranda facades. The two pubs, typical Aussie country hotels, look unchanged since the 1940s and the locals still stop and chat on the main street as people do in a country town with a population of less than 1000. Adelong barely deserved to be called a town until gold was discovered in 1853. Two years later there were 2,000 miners spread across the narrow valley and by 1860 the town had grown to around 20,000. Today its appeal lies primarily in the beauty of its main street, the pleasant walk beside Adelong Creek and the excellent remnants of the goldmining era which still exist at the Adelong Falls Reserve

Adelong is 411 km south-west of Sydney via the Hume and Snowy Mountains Highways. It is 340 m above sea level.

No one knows precisely what Adelong, or a word which sounded like Adelong, meant in the local Wiradjuri language but it is now accepted that it either meant 'along the way' or 'river on a plain'. As Adelong is in a valley, the last definition seems doubtful.

An Historic Walk Exploring the Buildings of Adelong
There is a delightful historic walk around Adelong which takes about an hour and passes most of the town's interesting and National Trust-listed buildings. The starting point is at the Royal Hotel on the corner of Campbell and Tumut Streets (Tumut Street has been classified by the National Trust) at the Tumut end of town. The Royal is the oldest hotel in town and is a typical country pub with a characteristic wide veranda. On the opposite corner is the Bank of New South Wales, built in 1882. It is a two-storey Classical Revival bank built of sandstone bricks and with a cast-iron and timber veranda and balcony. It oozes prosperity as the town was rich from the surrounding gold mines at the time of its construction.

The walk proceeds along Tumut Street passing the Hotel Adelong, the Post Office (1886), the Apex Park and The Old Pharmacy (1877). On the corner of Havelock Street is a single-storey private house which is a rare extant example of a miner's cottage. It was built in 1873.

In Havelock Street is St Andrew's Presbyterian Church which was built in 1878 and in Lockhart Street is the Wesley Uniting Church, built in 1886. The site had been used by Methodists since the beginning of the goldrushes. Services were held there as early as 1853 and a simple church was built on the site in 1866. Campbell Street is the setting for the Police Station and the Court House which were both built in 1874. On Gilmore Street the Adelong Public School (1877), with its church-like main school building and steep gables, has been listed by the National Trust. In Gundagai Street, St James Catholic Church dates from 1862. It was consecrated in 1868 by Bishop Polding, the first Catholic Archbishop of Australia. From the Catholic church it is only a short walk back to the Royal Hotel.

The Walk Beside Adelong Creek to Adelong Falls Reserve
The walk beside Adelong Creek is a delightful way to spend a few hours (the walk is flat and takes about half an hour each way) and the path includes signs which explain the history and processes of gold mining in the area. At various points the visitor gets information like "The 8 metre waterwheel was built in 1870 to power the entire mill … it could generate 37 kw" and, at the Reefer Gold Battery, the function of each of the parts – the flume, the waterwheel, the buddle, the holding tanks, the reverbatory furnace – is explained.

The Walks around Adelong Falls Reserve
There are three walks around the Falls. The Ferndale Walk is an easy 40 minute loop which passes the Sawyer's Gully waterfall and the Reefer Battery. The Battery Walk takes 30 minutes and includes the wheel houses and the long staircase and the Campsie Lookout Walk is a 15 minute walk along Adelong Creek.

What makes Adelong so important is that so much of the gold mining equipment is still intact. This make it a real gold mining experience where it is possible to see the original battery, inspect the stone ruins and pan for gold just as the fossickers and miners did back in the 1860s and 1870s.

Richie's Gold Battery at the Adelong Falls Reserve
The Adelong Falls Reserve, which is located on the Old Gundagai Road to the west of the town, is a combination of walks, some falls and pools where it is still possible to pan for gold, and the remnants and ruins of Richie's Gold Battery which was built by David Wilson and William Richie in 1870. The area is clearly signposted and many of the ruins are easy to recognise including the Gold Battery, the water wheels which were used to drive the battery, and the old brick chimney.

A brochure explains: "The ruins of the Richie's gold batteries are the remains of a quartz crushing and gold saving installation, which was praised as 'a credit to New South Wales' and which ranked 'foremost of any in Australia' (Department of Mines annual report 1882). The ruins are made up of what was called a 'reefer machine' and was operated from the earliest 'rush' days up until World War I. All the machinery at the site was worked by two large water wheels supplied with water from the Adelong Creek and carried down by races, either cut into the hillside or on wooden trestles."

There is some confusion about the total gold production from the area but it is known that 5 tonnes of gold were delivered to the Sydney Mint from the Reefer Ore crushing mill up to 1914. Certainly tunnels were blasted into the surrounding hills to a depth of 400 metres (the great Victoria mine operators received a bounty of 1000 pounds when their shaft reached 800 feet) and, at its peak, mines with names like Gibraltar, Long Tunnel, Donkey Hill and Lady Mary were yielding as much as 50 ounces to every ton of ore crushed. If you want to try your luck, it is possible to buy panning dishes from many of the stores in Adelong.

Adelong Alive Museum
The Adelong Alive Museum, a simple country town museum, now has an extensive collection of historic photographs and a lovingly created model of the Adelong Falls gold crushing mill, the Reefer Battery. It is an ideal starting point for anyone wanting to understand the boom industry which drove the town's economy from the 1860s until the outbreak of World War I when a combination of declining gold yields and a desire by the miners to head off to Europe to fight saw the end of gold mining in the district. Located in Tumut Street, it is open by appointment, tel: (02) 6946 2417.

* Prior to European settlement the Adelong Valley was inhabited by members of the Wiradjuri Aboriginal language group.

* Europeans had settled the area by the 1840s. The Adelong Creek Station was established in 1843.

* Gold was discovered in 1853 and a gold rush followed. In two years the town's population had reached an estimated 5,000 people.

* In 1855 the local Anglican parish was established.

* By 1857 more gold was being found in the district. William Williams discovered reef and alluvial gold on Mount Charcoal and, as the folk legend would have it, at one point he bought a mining claim for £40,000 and sold it for £75,000 later the same day.

* In 1862 St James Roman Catholic Church was consecrated and by 1866 the Methodist Church had been built.

* Through the 1860s and 1870s the town boomed with mines and batteries (to crush the reef gold) opening up along the valley. The mines had names like Donkey Hill, The Challenger, Lady Mary, Long Tunnel, Great Victoria and Gibraltar.

* In 1874 the town's Court House and Police Station were completed.

* In 1930 the Reefer Battery Dam was blown up so the silt could be washed for gold.

* Today the town is a small service for the surrounding farmers (with cattle, sheep and orchards dominating) and all that remains of the booming gold mining town is a charming historic remnant with large sections of the main street being classified by the National Trust.

There is a useful local website - http://www.adelong.org.au/ - which includes information about eating and accommodation in the town. 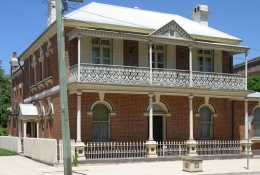 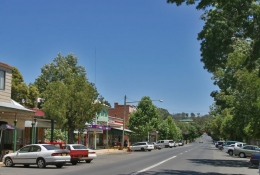 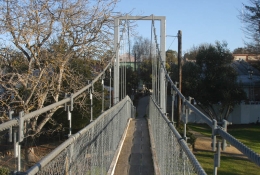 The suspension bridge across the Adelong Creek. 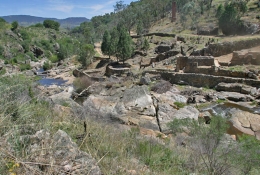 The remnants of the Gold Battery at Adelong Falls Reserve. 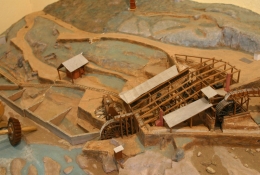 The model of the Gold Stamper Battery in the Adelong Alive Museum.

The Adelong Falls with part of the Gold Battery ruins beside the creek.

The path between the town and Adelong Falls is flat and delightful.