Queensland's northern-most surfing beach and "the birthplace of Queensland".

Agnes Water is recognised as the most northerly surfing beach in Queensland. In a recent book, 101 Best Beaches, it was listed as one of the ten best beaches in Australia. Go, walk and surf, and see if you agree. It has also become a popular stopover for international backpackers which has seen the local tourism industry boom.

There are two theories about the origin of the name 'Agnes Water'. Some authorities claim that the town was named after the schooner Agnes which disappeared from nearby Pancake Creek in 1873. Others believe it was named after Agnes Clowes, the daughter of the first European settlers, Daniel and Rachel Clowes.

Agnes Water Beach
Agnes Water beach is Queensland's most northerly surf beach. It is accessed through the Tom Jeffery Memorial Park off Agnes Street or at the surf club off Beach Road. It is a sublime beach which faces east-north-east and is a single 5.5 km arc which runs from Round Hill at 1770 to Agnes Water. Most of the beach is backed by a low sand dune and natural coastal vegetation. Typically the beach has waves averaging about one metre. It is used by the organisations which teach backpackers the rudiments of surfing.

Discovery Coast Historical Museum
Located at 69 Springs Road, Agnes Water and open 1.00 pm to 4.00 pm, Monday and Wednesday to Saturday and 10.00 am to 1.00 pm on Sunday, it is designed to celebrate the landing of James Cook and includes copies of journals, logs, charts and a model of HM Bark Endeavour. Other exhibits include Indigenous and Islander artefacts, fossils, minerals, local coral and shells, maritime history, Bustard Head Light Station, photographs and books of the early days of Miriam Vale, Rosedale, Bororen, Baffle Creek, Agnes Water and Town of 1770. For more information check out http://www.agneswatermuseum.com.

Settlers' Graves
The grave site of Agnes Water's first settlers, Daniel & Rachel Clowes, are located in the section Tom Jeffery Memorial Park which is surrounded by a car park. Mercifully the graves are in the shade of a Moreton Bay fig tree. The Clowes are recognised as the first permanent European settlers in the area. They arrived in the Agnes Water area in 1878 to run cattle.

Reedy Creek Reserve - Paperbark Forest Boardwalk
Reedy Creek Reserve protects 452 ha of creek and woodland about 3 km south-east of the town's Visitor Information Centre. It is a genuine hidden treasure with a boardwalk and narrow walkways through the dense paperbark forest. There are concrete stepping stones across those areas which can become damp and water logged during wet weather. It is therefore not suitable for people with limited mobility. The walk is only 400 metres and takes around 30 minutes. The forests are dense and impressive and the Climbing Maiden Hair (lygodium microphyllum) is both unique and particularly beautiful. The short walk is well signposted with interesting signs about the paperbark tea tree, the climbing maiden hair and the conservation partnership which protects the area. For bird lovers one of the signs notes: "When in flower the profusion of bottlebrush flowers provide nectar for lorikeets, friarbirds, and many honey eater species. The flowers themselves are an important food for Black, Grey-Headed and Little Red flying foxes."

National Parks
To the south of Agnes Water lies Deepwater National Park and to the north is the Eurimbula National Park. Both parks are rich in floral diversity and are characterised by rainforests, native shrubs, open heathland, swamplands, coastal vegetation, water holes, coastal beaches and estuaries. They are rich in native animals and birdlife.

Deepwater National Park
Deepwater National Park can be accessed from Agnes Water and Seventeen Seventy by driving south on Springs Road and following a sandy track to the park's northern boundary. Access is only available to high clearance 4WD vehicles.
The National Parks website outlines the park's features as follows: "The park's diverse vegetation of coastal scrubs, eucalypt woodlands, wet heaths and sedgelands surround Deepwater Creek and its tributaries. Tannins and other substances leached from surrounding heath plants stain the creek water brown. The creek is fringed by tall forests of swamp mahogany, paperbark and cabbage palms, and is broken in places by shallow sections of reed bed and paperbark forest. In these areas water only flows during the wet season. Deepwater supports diverse birdlife such as emus, red-tailed black-cockatoos, honeyeaters, brahminy kites and waterbirds. Nesting turtles frequent Deepwater Beach from October to April, turtle hatchlings emerge from the nests from January, usually at night."
A day use only area is provided at Flat Rock which is a great place for families at around low tide, with a shallow swimming lagoon created by the long flat rock shelf.
At Middle Rock there is both basic camping without facilities and defined campsites, picnic tables, a cold shower, self-composting toilets, rainwater and bore water at Wreck Rock. For comprehensive information check out http://www.nprsr.qld.gov.au/parks/deepwater/about.html which provides detailed information about camping and access.

Eurimbula National Park
From Agnes Water head out of town along Round Hill Road for 10 km then turn at the Eurimbula National Park sign. A 15 km bush track leads to Bustard Beach camping area at the mouth of Eurimbula Creek. About 6 km from Round Hill Road (9 km before you reach Bustard Bay camping area) is the turnoff to Middle Creek. This track is approximately 13 km. About 7 km from Round Hill Road is the start of a moderately steep 720 m (return) walk to Ganoonga Noonga Lookout which provides sweeping views of Bustard Bay, Seventeen Seventy and the local swamps and heathland. The website explains: "From this vantage point you can view the low grounds (Ganoonga Noonga)—swamps and heaths—covering the parallel dunes that have built up over the last 6000 years. Panoramic views include Munro Range to the west, Bray Hills to the north, and Bustard Head and Bustard Bay to the east." For more detailed information check out http://www.nprsr.qld.gov.au/parks/eurimbula/about.html.

Tours and Cruises
In recent times Seventeen Seventy and Agnes Water have become part of the great backpacker trek up the coast of Queensland and consequently a tourist industry of cruises and adventure tours has developed in the area. To discover the available tours check out http://www.1770larctours.com.au/tours.aspx (they offer four tours including trips along Bustard Bay beach, a trip to Bustard Head lighthouse and an Indigenous Walkabout tour. The local website offers a range of offshore charters, dolphin trips, surfing schools, kayak hires and undersea adventures. Check out http://www.agneswater.net.

* Prior to the arrival of Europeans the area was home to people from the Meerooni Aboriginal group who were part of the Gooreng Gooreng language group.

* On Wednesday 24 May 1770, Lieutenant James Cook anchored the Endeavour about 3 km off the coast.

* Cook went ashore near Round Hill Head with botanist Joseph Banks and his assistant Daniel Solander. It was only the second time during the voyage that he had set foot on Australian soil. The party landed at the south point of the bay where they found a channel leading into a large lagoon. Cook wrote: "In this place there is room for a few ships to lie in great security, and a small stream of fresh water". They noted many pelicans and, upon the shore, a species of bustard, one of which was shot. They considered it the best bird they had eaten since leaving England, and in honour of it they called the inlet Bustard Bay.

* Cook's party did not see any Aborigines during their shore visit, but they did find campsites, fires and artefacts.

* The schooner Agnes sank off Bustard Head in 1873.

* In 1883 Daniel Clowes took up land in the area which he named Agnes Water after a coastal schooner named Agnes.

* By the 1890s timber cutters had moved into the hinterland and there was a sawmill operating.

* By the end of the 19th century the area was popular with holidaymakers.

There is a useful local website. Check out http://www.visitagnes1770.com.au. 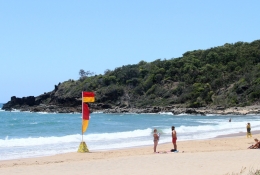 The eastern end of Main Beach. 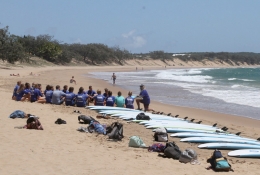 A surfing class for backpackers on Main Beach. 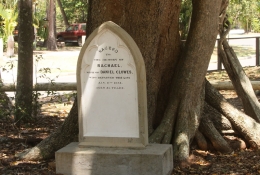 The Grave of Rachel Clowes, now in the parking lot at Agnes Water main beach. 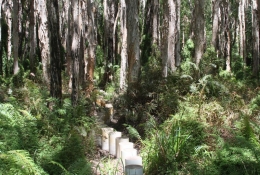 Stepping stones through the Paperbark Forest just off Springs Road. 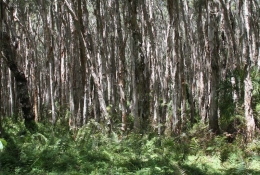 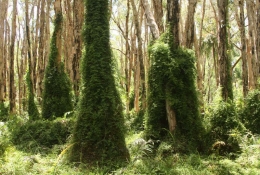 Climbing maidenhair in the Paperbark Forest