Aireys Inlet is a quiet holiday destination on a particularly attractive section of the Great Ocean Road. It is nestled between Anglesea and Lorne, is often passed by visitors eager to move further along the coast but has the strong appeal of a lighthouse (Split Point) which can be seen for some distance and the particularly beautiful Fairhaven Beach which is close to the main road. It is a very typical, quiet resort town surrounded by an impressive hinterland which is ablaze with wildflowers in spring and summer.

Aireys Inlet is located 125 km southwest of Melbourne via the M1 and 49 km south of Geelong.

Although Europeans settled the area in the 1820s it wasn't until the arrival in 1846 of a settler named  J. M.C. Eyrie (somehow the spelling was changed to Airey) that the town got its name.

Split Point Lighthouse
Affectionately known as "The White Queen", the Split Point Lighthouse was built in 1891 partly as a response to the sinking of the Joseph Scammell. It is a cement rendered concrete tower which can be seen 20 nautical miles out to sea. It is 66 metres above sea level and 34 metres in height. It was originally lit by vapourised kerosene but this was changed to acetylene in 1919 when it was automated. It was converted to electricity in 1972.
It is said that Split Point Lighthouse is haunted. Certainly it was described in Arthur Upfield's novel The Clue of the New Shoe as "a tapering white stalk holding aloft the face of glass beneath the cardinal's red hat".
Today the lighthouse is managed by Eco Logic Education and Environmental Services who offer guided tours on the hour between 11.00 am and 2.00 pm which last 45 minutes. For details tel: 1800 174 045. The view from the top of the lighthouse provides excellent views of the surrounding coastline. Check out http://splitpointlighthouse.com.au for details.

Airey's Inlet Bark Hut and Allen Noble Sanctuary
Located on Inlet Crescent the Allen Noble Sanctuary is a pleasant retreat in the centre of Airey's Inlet. It is adjacent to the Bark Hut Reserve where the original bark hut, the home of Thomas and Martha Pearse, was built around 1857 and existed until it was destroyed in the Ash Wednesday bushfires in 1983. A replica was built and it stands beside the Inlet Crescent. The Allen Noble Sanctuary is a wetland sanctuary with boardwalks where it is possible to see a wide variety of native birds. Nearby is a Memorial Cairn to Thomas and Martha Pease who were important early settlers. The sanctuary has a small lake.

Fairhaven Beach
Located a few kilometres west of Airey's Inlet, and now effectively part of the sprawl of the town, is Fairhaven Beach. It is 6 km long, is rated hazardous, but is recognised as an outstanding surfing beach with good breaks and a good 1.5 m swell. The popular surfing spots are Moggs Creek, The Spot and Spouts Creek. It is dangerous for body surfing as there can be up to 20 rips along the beach. There is a patrolled area in front of the Surf Club which is at the Airey's Inlet end of the beach.

Great Ocean Road Memorial Arch
Located 5 km west of Aireys Inlet the Memorial Archway was built to commemorate the services of those who served in World War One. Construction of the road started in 1919 and the section from Eastern View to Lorne was opened in 1922. The memorial records that "three thousand Australian returned soldiers and sailors of the First World War (1914-1918) built the Great Ocean Road. They had survived a terrible world war in which 330,000 Australians volunteered to fight in Europe, Turkey and the Middle East, 60,000 were killed and 160,000 wounded. The casualty rate of more than 64% was higher than that of any other nation engaged and Australia's highest in any war. This was had immense repercussions for the returned men and broader Australian community of 5 million people for ensuing decades.
Finding employment for the returned servicemen was a crucial factor in their rehabilitation to civilian life. Many had had their original pre-war job preserved and some took up soldier-settler farms subsidised by the Government.
In Victoria post war, the GOR project offered the chance to work again in the open, share mateship and contribute to the vigorous, young Australia then, just 20 years old.  The majority of the workforce were returned men, they were all employed with good pay and conditions. Funding was irregular, the State Government was restrictive but the RSL and local communities were generous  ... The arch commemorates the construction of the road and symbolises the sacrifice made by so many in the First World War. It stands astride the largest enduring war memorial in the world."

* Prior to European settlement the area was inhabited by the Gulidjan people.

* In 1839 John Airey (or, perhaps, J. M.C. Eyrie - there is some dispute) settled near Point Roadknight at the present site of Anglesea.

* By 1842 Airey/Eyrie had expanded along the coast.

* With the advent of the goldrushes Cobb & Co. provided a regular service from Geelong to Anglesea. From Anglesea passengers travelled  on to Aireys Inlet on a four-horse wagonette conducted by James Hasty.

* In 1891 the Split Point lighthouse was built.

* In 1893 the first school opened. It primarily catered for the children of timber workers.

* 1903 saw the arrival of a Post Office and the construction of the Anglican Church.

* In 1922 the Great Ocean Road through the town was officially opened.

* In the 1950s the crime writer, Arthur Upfield, lived in the town.

* The town developed very slowly and even modern tourism has tended to pass it by. Today it is a quiet seaside retreat.

An excellent local website is http://www.aireysinlet.org.au/. There is also an exceptional and moderately-priced book on the Great Ocean Road. Check out http://www.rodneyhyett.com.au/great-ocean-road-guide-book.html for details. 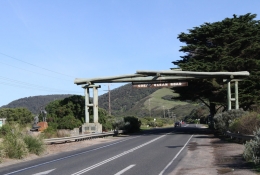 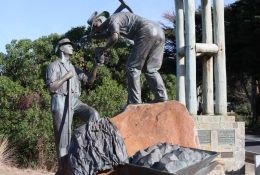 The monument to the men who worked on the Great Ocean Road at the Memorial Arch between Aireys Inlet and Lorne. 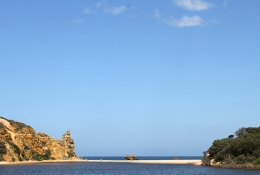 View out to the ocean through the mouth of Painkalec Creek. 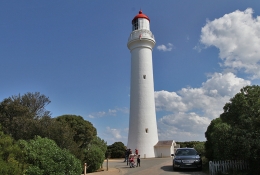 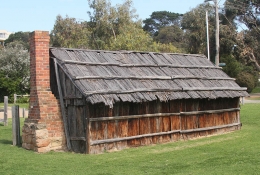 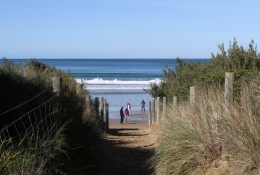 One of the many paths to the beach at Aireys Inlet