Albion Park Rail is located 105 km south of Sydney via the Princes Highway. It is 23 km south of Wollongong.

One of the early European landowners was Samuel Terry who bequeathed the land to his nephew John Hughes. Hughes, as the Town and Country Journal noted: "had quite a fancy for the name Albion and called all his landed possessions in various parts of the country Albion something or other. This estate having been the best of the lot and his favourite place of residence he named it by way of distinction Albion Park." Albion is an historic name for Britain.

Historical Aircraft Restoration Society (HARS)
Located at the Illawarra Airport, HARS is a unique aviation museum which is based on guided tours rather than the inspection of exhibits. In 2017 the museum had ten flying aircraft, eight static aircraft, seven aircraft being restored, eight engines on display as well as cockpits, stairs and other ancillary pieces of equipment.

Tours of HARS
There are a range of tours starting with the basic Museum Only tour which visits the displays and hangars and offers limited access to the Boeing 747-438. The other tours include:
Tarmac Days - which are held on the second Friday of the month and involve being able to board aircraft like an F-111C fighter bomber and the Neptune submarine hunter. Visitors can sit in the cockpit and experience what it must be like to fly these planes.
B747 Premium Tour - is not cheap but involves a "comprehensive tour of the record-breaking VH-OJA, hosted by experienced former engineers and operating crew of this aircraft – Pilot, Engineer and Cabin Crew.  This is a detailed exposition of the aircraft and involves exploration of the Cargo holds, Electronic Equipment Centre and a “power on” tour of the Flight Deck."
B747 Cockpit Tour - slightly cheaper than the Premium Tour if offers "an hour in the cockpit of VH-OJA hosted by a pilot who will explain the cockpit in detail and will take you through normal and non-normal procedures." Each tour is restricted to two participants.
B747 Wing Walk - a walk along the right wing for about 16 metres. The tour is restricted to six participants.
In December, 2017 it was announced that actor John Travolta had gifted his ex-Qantas plane, a Boeing 707 which bears the registration 707JT, to HARS. The Illawarra Mercury reported that "At the time, Travolta – a qualified pilot and Qantas ambassador – said the plane needed "a lot of work to be restored to a safe flying state. Having seen first hand the dedication and passion of people at HARS, I have no doubt this beautiful and historical aircraft will be flying again."
The project will cost more than the initial $1 million estimate and there are "still many challenges and obstacles".
A spokesperson for HARS said: "We've only just been given a reasonable picture of what works need to be done with the aeroplane, so we're just evaluating all that at the moment. It's many millions of dollars. We didn't expect anything less, but now that we know what we need to find we can break it down and work with the people who have shown interest in what we're doing." The task of getting the plane ready to fly would take 120 days, at least, but when it is ready to fly to Australia some time in 2018, Travolta will accompany it from the United States.
The museum is open from 9.30 am - 3.30 pm daily and the B747 Exclusive and Cockpit Tours occur at 10.00 am (they have to be booked 24 hours prior) each day. For more information check out or tel: (02) 4257 4333 or check https://hars.org.au.

The Illawarra Light Railway Museum
The Illawarra Railway Museum is located on Tongarra Road which runs between the Princes Highway and the Illawarra Highway. Their collection includes two Queensland sugar trains dating from 1939, one of which had been originally owned by CSR; a coal train donated by AIS Port Kembla; an American steam train built in 1917 and used to haul blue metal in Kiama; and a range of diesel engines.
The museum regularly opens to the public with train rides on the Second Sunday of each month, from 11.00 am to 4.00 pm. They also operate on the fourth Sunday in January, Easter Sunday and the Sunday of the June (Queen's Birthday) and October (Labour Day) long weekends. Steam locomotives operate on the monthly running day but may be replaced by a diesel locomotive due to a total fire ban or other operational requirement such as volunteer availability. Check out http://www.ilrms.com.au/ for details of opening times and special days.

Killalea State Recreation Area
There are a number of legendary surfing locations along the New South Wales coast: The Farm at Killalea State Recreation Area is one of them. Named after Edward Killalea it draws surfers to both 'Mystics Beach' and 'The Farm'. Non-surfers are attracted by the beauty of the area, the excellent picnic facilities and the opportunities for scuba diving, snorkelling, fishing and walking. It is located 11km to the east of Albion Park via the Princes Highway.

* Albion Park was home to the Wodi Wodi Aborigines who spoke the Tharawal language and who called the district 'Yerrowah'.

* On 26 April, 1770 Captain James Cook recorded observing "smoke on the shore before dark" to the east of Albion Park. Many local Aborigines believe that this is a reference to their ancestors fires on Bass Point.

* The first Europeans in the area were explorers George Bass and Matthew Flinders in March, 1796.

* As early as 1803 Captain Isaac Nicholls, trying to stave off starvation in Sydney because of a drought, shipped cattle into the fertile plains around Albion Park.

* In 1812 the explorer George Evans camped at Barrack Point while en route to Appin.

* In 1816 Governor Macquarie requested that his surveyor general, John Oxley, establish free land grants and this resulted in, the land around Shellharbour being divided into 22 free grants with the first grant of 700 acres being issued to Andrew Allan on land now occupied by the Albion Park airport. Allan called his property Waterloo.

* Cedar cutting had existed in the area since around 1812. The challenge was to get the cedar to Sydney and in the early days the logs were simply floated offshore to waiting ships.

* By the 1820s Shellharbour had become a port and the cedar was being brought to the port and loaded onto waiting ships.

*  It was Wentworth who, in 1851, established a private township which he named Peterborough. This was officially changed to Shellharbour in 1885.

* A station which was located 2 km to the east of Albion Park was constructed in 1887. It became known as Albion Park Rail.

* Today Albion Park is a suburban area bisected by the Princes Highway and the Illawarra Highway.

There is no Visitor Centre in Albion Park. The closest is Shellharbour Visitor Information Centre, cnr Addison and Wentworth Streets, Shellharbour Village, tel: (02) 4221 6169.

The Shellharbour Council has a useful website with a history of the local area. Check out http://www.shellharbour.nsw.gov.au/ and http://visitshellharbour.com.au/ has extensive accommodation and eating options. 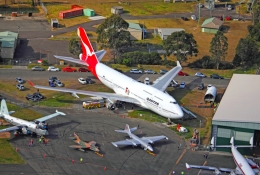 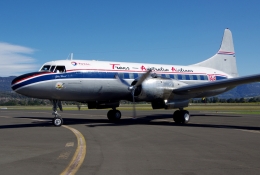 A TAA Convair arrives at the Illawarra Airport for HARS 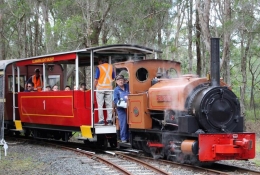 A train journey at the Illawarra Light Rail Museum.