The Adelaide Hills are Adelaide's answer to an Indian hill station during the British Raj. They are cool in the summer months when Adelaide can be impossibly and offensively hot. The trees, the quietness, the charm and elegance are all part of an "away from it all" ambience which makes all the villages special and delightful. In the case of Aldgate there is little more than the famous Aldgate Pump Hotel, a pump in the main street which remains from the time when it was used to water horses passing across the hills, and a few shops. It is a sleepy and pleasant stopping point.

Aldgate is located in the Adelaide Hills 20 km south-east from the centre of Adelaide.

Aldgate was named after the Aldgate Pump Hotel which was established by Richard Dixon Hawkins who named his hotel after an area in London just north of the Tower and East of the City of London. As the term finds its roots in Old Gate it is remarkably suitable for this location which, with its distinctive pump, was both a hotel and an entry point to Adelaide. In the 1930s an anonymous writer, calling themselves "Our Special Representative", wrote about Aldgate and noted that "In its earliest days, Aldgate was known as "Aldgate Pump," or "Aldgate Village Pump." I have an old "Gazetteer," nearly seventy years old, which refers to it as such. The village took its name from a pump outside the little inn that used to occupy the site of the present hotel. Here, at a trough, the thirsty bullocks, and sweating horses, used to drink after the long, stiff climb over the Tiers, while their drivers did likewise in the tiny bar. That pump is still there; and the hotel is still called the Aldgate Pump."

Aldgate Pump Hotel
The Aldgate Pump Hotel has been modernised and changed many times over the years. However it is the reason that Aldgate exists. As early as 1852 Richard Dixon Hawkins, a licensed victualler and the son of a London publican, established a coaching inn hoping to capitalise on the rush to the goldfields at Echunga. By 1859 Hawkins had bought land and built the present Aldgate Pump Hotel, known to many simply as "The Pump". He had seen the traffic over the hills, and particularly the possibilities which existed at the point where the old Mount Barker Road crossed the Echunga Road. Hawkins built the Aldgate Pump Inn, built the pump and water trough, and watched as more than 60,000 people a year passed his front door. The hotel became quite famous. At one point it was described as "one of the best decorated of its kind in the Colony" with "magnificent chandeliers". By 1870 there was a small settlement around the pump (the one opposite the pub is not the original one). Richard Hawkins had a established a smithy on the opposite corner to the pub. Hawkins sold the pub in 1875 and moved to Echunga where he died two years later. Today the hotel is still an attraction, particularly on weekends, when people from Adelaide take a day trip to the hills.

The Pump and the Corner Store
Across the road from the Aldgate Pump Hotel is the pump (not the original one - and not in the original location) that was placed in the village by Richard Hawkins to encourage travellers to stop, water their horses and, perhaps, water themselves at his inn. Nearby is the old 'General Store' which dates from 1883 when building blocks were offered for sale. At various times it has been a general store, a butcher's shop and, in the 1890s, the Hills Cash Store.

Stangate House
Located at 3 Edgeware Road, Aldgate, Stangate House was bequeathed to the National Trust of South Australia in 1975. This elegant house was designed by Eric McMichael, a noted Adelaide architect, and built in the 1940s. The central appeal of the home lies in the outstanding garden with its huge oak tree (some suggest it dates from 1864 and was originally planted by Richard Hawkins but other sources claim it was planted by a homesick gold prospector) and its displays of camellias, hydrangeas and rhododendrons. The camellia gardens are so impressive they have been recognised (one of only 40 throughout the world) by the International Camellia Gardens of Excellence. Check http://www.stangatehouse.org.au for details.

Aldgate Valley Nature Walk
This Nature Walk is a pleasant 6 km stroll from the corner of Strathalbyn Road and Mount Barker Road down to Stirling and across to Mylor. There is an excellent brochure which includes a detailed map. Check out http://www.ahc.sa.gov.au/ahc-visitor/Documents/Aldgate%20Valley%20Nature%20Walk.pdf. The walk is broken into two sections - Stage 1 between Aldgate and Aldgate Valley and State 2 between Aldgate Valley Reserve and Mylor. As the brochure explains: "The bushland along the Aldgate Valley Nature Walk provides habitat to dozens of species of native mammals, birds, reptiles, fish and amphibians. Mammals include Kangaroos, Bandicoots, Possums, Water rats, Echidnas, Antechinus, Koalas and others. You might also come across several different species of snakes and lizards ... More than 150 species of native plants occur along the walk, ranging from delicate orchids to towering Candlebark gums. At all times of the year there will be something in flower, but the best wildflower displays are in spring. In autumn you can often find spectacular fungi." There are interpretative signs along the walk.

* Prior to European settlement the Adelaide Hills were home to the Kaurna Aboriginal people.

* In 1836 the land upon which Stangate House is built had been granted to Robert Thomas, a printer and newspaperman in Adelaide.

* By 1857 the land had been surveyed and subdivided into allotments.

* In 1864 Richard Dixon Hawkins, a licensed victualler and the son of a London publican,  established a water pump and a trough for horses as well as the Aldgate Pump Hotel where the town now stands. Hawkins was hoping to capitalise on the increasing traffic across the Adelaide Hills to the Echunga goldmining area.

* In 1867 Cobb & Co started a regular coach service from Adelaide to Aldgate.

* By 1870 a small settlement had grown up. Hawkins, ever mindful of his potential customers, established a blacksmith's shop opposite the pub.

* In 1875 Hawkins sold the pub and moved to the Echunga goldfields.

* In 1882 Aldgate was named after the Aldgate Pump Hotel which, in turn, had been named after an area in London. The word 'aldgate' is a corruption of 'old gate'. At this time the Hills Land & Investment Company laid out a town around the inn and pump. That year saw the Aldgate Park subdivision released for sale.

* The arrival of the railway in 1883 saw the hotel's importance decline and the traffic across the Adelaide Hills was greatly reduced. That year the town became part of the Stirling District Council.

* In 2005 the village experienced serious flooding.

* Today Aldgate is one of number of small and attractive villages in the hills.

There is no specific visitor centre in the village. The nearest is the Mount Lofty Summit Visitors Information Centre, Crafers, tel: (08) 8370 1054. 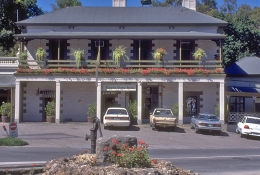 Aldgate Pump Hotel and pump in the main street. 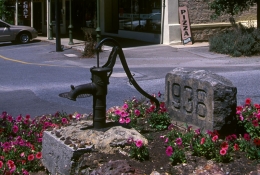 The famous Aldgate pump in the main street.