Alexandra is an attractive service centre with the Ultima Thule Creek running through its heart and surrounded by rolling green hills. In recent times it has become a fashionable rural retreat. Consequently it has good cafes, is surrounded by pleasant walks and its Timber Tramway Museum is a genuinely interesting tourist attraction. It also is surrounded by beautiful waterfalls and some truly glorious lookouts offer excellent vantage points over the rich, green Goulburn Valley.

Alexandra, which is 220m above sea level,  is located 130 km northeast of Melbourne on the Maroondah Highway.

Alexandra's original name was Red Gate which was first used by gold miners who were drawn to the Red Gate Diggings. The change of name probably occurred when someone decided that it would be more suitable to call the town Alexandra, after the Princess of Wales, the wife of the man who would become King Edward VII although some sources claim it was possibly named because three early settlers all were named Alexander.

Alexandra Timber Tramway Museum
The Alexandra Timber Tramway Museum is located at the town's old railway station and staffed by railway and steam enthusiasts. Its exhibits include a John E Fowler steam engine dating from 1909, a Malcolm Moore 2 ft narrow gauge market train locomotive and 1935 and 1936 Kelly and Lewis Diesel Locomotives. The museum is open from 10.00 a.m. to 4.00 p.m. on the second Sunday of every month (steam-hauled trains) and the fourth Sunday of every month (diesel-hauled trains). For $25 it offers unlimited train rides for a family of two adults and two children. See http://www.alexandratramway.org.au for more details. As they point out on the website "Our museum now features a vast showcase of history exhibits, from both local, and the nearby timber logging industry in the Rubicon Forest. We also have one of the most extensive collections of industrial rolling stock in Australia."

Historic Buildings
Walk the main street (Grant Street) of Alexandra and you will notice a number of interesting, historic buildings.

The  former Union Bank (1888-89) - now the ANZ Bank building -  is located at 93 Grant Street. It was designed by the architect G. Inskip, boasted a handsome stairway and mantelpieces, and has dominated the townscape.

During the goldrush era a number of impressive buildings were constructed to reflect the affuence of the town. There is the post office, the former shire hall built in classical Greek revival style in 1877 and the Victorian Free Library.

McKenzie's Flora Reserve
On the southern outskirts of town is the McKenzie Flora Reserve which provides a haven and habitat for many remarkable Australian wildflowers, rare orchids animals and insects including stands of River Red Gums, Red Box, Yellow Box and White Box as well as floral displays of yellow buttercups, yam daisies, guinea fowls The bird life includes grey fantails, painted button quail and the area is rich in butterflies including the Imperial Blue, Imperial White, Australian Painted Lady and Common Brown. During the goldrush era the land was occupied by Donald McKenzie who originally set aside the 47 ha to provide timber for the gold mines. There is a pleasant one hour walk through the bushland which, apart from the flora and fauna, also passes several excavations and other evidence of its gold mining past.

Rotary Park
In the centre of town is Rotary Park with an excellent Visitor Information Centre, an interesting statue of a timber worker, a charming swing bridge and picnic and barbecue facilities. It is a cool retreat beside the Ultima Thule Creek and is an easy walk to Dove Cottage.

Dove Cottage
This unusual building, located in Leckie Park, is an original miner's cottage dating from the 1890s. It is named Dove Cottage because, after the Black Friday bushfires of 1939, a woman named Sarah Dove moved into the cottage and stayed until 1983. It is rarely open but visitors are encouraged to look through the windows.

* Prior to the arrival of Europeans the area was inhabited by members of the Taungurong Aboriginal language group.

* There was some settlement in the 1830s and 1840s but the area grew overnight when gold was discovered by Alexander McGregor, Alexander Don and Alexander Luckie in 1866. Some argue the town's name is based on the first names of these three settlers.

* The railway arrived in 1909 and, in spite of the collapse of the gold industry, agriculture sustained the town as it became an important service centre for timber and mixed farming.

* In February, 2009 the area around Alexandra was devastated by bushfires with 173 people killed and over 2,000 homes destroyed.

The town has its own website - http://www.alexandratourism.com which provides useful information about accommodation and a food and wine directory. There is also a useful historical website - http://web.archive.org/web/20060824203547/http://www.arts.monash.edu.au/ncas/multimedia/gazetteer/list/alexandra.html 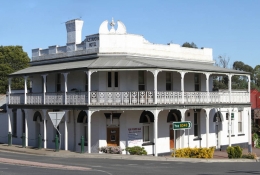 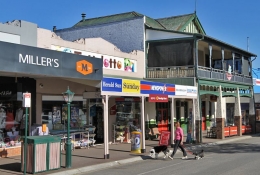 The main street of Alexandra. 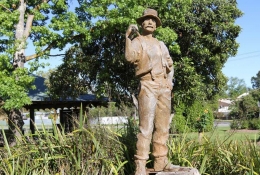 The timber worker in Rotary Park - a symbol of the district. 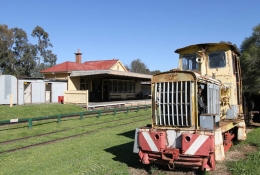 The railway station and an old engine at the Alexandra Timber Tramway & Museum. 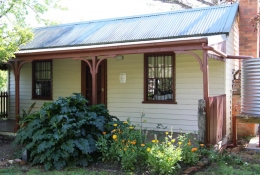