Known as 'The best little town on the Darling Downs'.

Allora, known as the 'Best little town on the Downs', is a genuinely charming and interesting small, rural settlement with a large number of well preserved historic buildings. It is located at the point where the New England Highway crosses Dalrymple Creek.

Allora is located 158 km south-west of Brisbane, 25 km south of Toowoomba and 467 m above sea level.

Often the origin of a town's name is pure guesswork. In the case of Allora there is some evidence that there was a word in the local Aboriginal language -  'gnallorah' meaning 'swampy place'. It fits because the Dalrymple Creek can be very swampy.

Allora Museums
Few towns can claim to have two museums but Allora has a rather handsome building (the Old Shire Hall) on the corner of Forde and Warwick Streets which specialises in reading facilities and special displays and a second museum (the original museum) where the town's most important attraction is a replica of the Talgai skull, an Aboriginal cranium estimated to be 9,000 - 10,000 years old. This second museum, previously the town's courthouse and very modestly constructed from timber, was built in 1860. It is open from 1.30 p.m. to 4.30 p.m. on Sundays but can be opened at other times by contacting (07) 4666 3185.

Historic Allora
There is no better way to explore Allora than to walk around the streets pausing at the numerous buildings (there are over 30 sites) which have small, informative plaques outside. Walking around the town is easy. Get your bearings from a large Town Map on the corner of Muir and Herbert Streets and make sure, at the very minimum, that you walk the length of Herbert Street, Drayton Street and Warwick Street. There are so many highlights. This is one of the prettiest and most historically interesting towns in the Darling Downs. Both St David's Anglican Church (1888 and listed on the Queensland heritage register) and St Patrick's Church, an elegant wooden Roman Catholic church (1898), are fine examples of timber country churches. The old Shire Hall, now part of the Allora Museum, is distinctive. Of particular interest are both the Australian Joint Stock Bank and the Queensland National Bank building both of which are constructed in timber and remarkably elegant. Another interesting building is Reppels B&B in Drayton Street which was originally the Reppel's Bakery and Temperance Boarding House, a charming timber building constructed by Henry Reppel in the mid-1880s.

Mary Poppins House at 61 Herbert Street
Travers Goff was appointed manager of the Australian Joint Stock Bank in Herbert Street, Allora and arrived in the town in 1905. In this charming house, now known as the Mary Poppins House, his daughter, Helen Goff, grew up. She later adopted the pseudonym P.L. Travers and wrote eight books about a magical English nanny. It is extraordinary to think that the imagination of a girl in Allora was fired up to create a character so alien to her childhood surroundings.

* Before the arrival of Europeans the area around Allora was inhabited by the Aboriginal Keinjan language group.

* The first European to pass through the district was Allan Cunningham on his 1827 expedition.

* When Cunningham recounted stories of the richness of the Darling Downs he inspired a number of men from Aberdeenshire in Scotland to emigrate. They included former Aberdeenshire resident E.E. (Ernest Elphinstone) Dalrymple who took up the Goomburra run near Allora in July, 1840. He ran cattle in the area only briefly. He died in Brisbane in 1844. The local creek is named after him.

* Grazier Patrick Leslie, another Aberdeenshire man, moved into the area in 1840 with a stud of combined merino and German sheep. He subsequently took over the running of Goomburra.

* By the mid-1840s a small settlement, mainly based around a blacksmith's shop, had been established where Allora now stands. In 1857 the Dalrymple Hotel was built.

* Queensland did not become a self-governing state until 1859 and prior to that Allora became an important centre when the New South Wales government (which still controlled the district) decided that Allora would be the northern outpost of the colony.

* In 1859 the Allora was surveyed. It became a municipality ten years later in July, 1869. It grew in importance as a stopover on the route from Toowoomba to Warwick.

* In 1867 Allora's chances of ever becoming an important centre disappeared when the Toowoomba - Warwick railway bypassed the town. It wasn't until 1897 that the town was connected by a branch line.

* In 1868 the owners of Talgai, the Clark family, built a huge, 150 square metre sandstone house on their 300,000 acre (121,405ha) property. The Australian Heritage Commission has recognized ‘Talgai Homestead’ as a National Treasure.  It is known for its wide shady verandahs, elegant rooms and 50cm thick sandstone walls. It was recently on the market for $7 million with 294 ha and four cottages. It is located on Dalrymple Road and is a private residence.

* By 1903 the town was prosperous with four churches, four hotels, two banks, a court house and police quarters, a town hall, two flour mills and a sawmill. 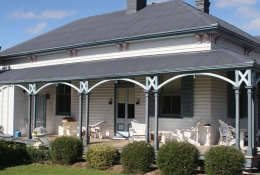 Mary Poppins House where the writer of Mary Poppins grew up at a time when her father was Bank Manager in the town. 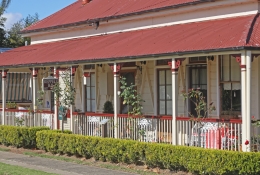 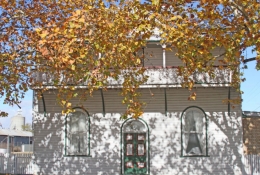 One of Allora's two museums.