Alpha describes itself as 'The Gateway to the West'. It is now a small service centre in western Queensland serving the surrounding rural area which is known as one of the richest cattle raising areas in the state. Today it is a quiet town which is a stopover point for people exploring the vastness of the state. It is known for its impressive display of murals (there are 26 around the town) and its impressive Fossilised Forest sculpture.

Alpha is located in western Queensland 1046 km from Brisbane via Roma and 1066 km via Rockhampton. It lies 247 km due east of Longreach.

Alpha is the first letter in the Greek alphabet. It was used, for reasons unknown, by the earliest European settlers in the region as the name for a station - Alpha Station - which was established in 1863. The town adopted the name.

Murals
When a group of local artists painted a wall mural in 1991 they started a trend. Today 26 murals adorn the walls of the town's pubs and numerous public buildings in Shakespeare Street. Even the toilet block by the rail yards has been decorated. Check out details of the specific murals on http://www.alphaqueensland.com.au/themurals.html

Tivoli Theatre Museum
Located behind the Visitor Information Centre in the main street (Shakespeare Street) is the old Tivoli Theatre and, most interestingly, the Beta Railway Station. The signage explains that: "Although Beta acted as the terminus for just 5 months from 12 January, 1885, its establishment also limited development in Alpha while it hosted a coach run to Blackall. However traffic from Tambo to Alpha continued as both teams and coaches preferred this road to earlier routes from Tambo to the rail. A combined station and residence, sidings and a triangle were erected at Beta ... During Beta's short life as a terminus, Tom McLaughlin manned a boisterous Pub. Cobb & Co received coach passengers from a tent. Calico also housed the Post Office and lock-up space of 12 x 10 ft combined. By June 1885 only the railway station and the navvies' hut remained."

Fossilised Forest of Alpha
Located in Shakespeare Street this impressive collection of sculptures was created by sculptor, Antone Bruinsma, who explains, on a sign near the work, that: "This stone sculpture installation represents a boulder, opened to present its mysteries and treasures - a fossilised tree. Like a thunder-egg, the inner beauty of the earth and stone is revealed, while the rough outer crust stands in contrast. For me, this also represents the character of the community of Alpha.
"The central 'tree trunk' of petrified wood is the core of what holds a community together. Its essence flowing out to the three larger elements. These can also be seen as a family group, with the two vertical pieces standing watch and welcoming friends and visitors. The horizontal piece appears to be resting and can also be used for sitting and invites contemplation and touch.
"The tree forms carved into the stones are symbolic for the flora and fauna which thrived here in ancient times. They have left an impression and we can only wonder what it may have been like back then. The petrified wood give hints to a rich and varied past. The black granite represents transformation (into coal), and connects us to the present. The pink stone, zeolite, placed in the heart space, is symbolic of purification and mineral wealth.
"The Fossilised Forest of Alpha sculpture tells the story of our connections with the past, present and future and this land. It is about continuity." Antone Bruinsma - Sculptor 2012.

Cairn
A cairn to the east of the town, on the Belyando River, recalls the arrival of the first European in the area, Surveyor-general Sir Thomas Mitchell.

Jump Ups
The unusual natural phenomenon of the 'Jump Ups' can be found on the Clermont Road just north-west of Alpha. They display the different layers of coloured volcanic soil.

Barcaldine
No visit to this part of western Queensland is complete without a stopover in Barcaldine. It may be 141 km west from Alpha but the road is straight and uncomplicated. Check out the entry on Barcaldine (https://www.aussietowns.com.au/town/barcaldine-qld) for details about the Tree of Knowledge, the Australian Workers Heritage Museum.

* The first European to explore the area was Major Thomas Mitchell who, arriving during the winter of 1846, reported that the area was characterised by 'rich grassy plains, fragrant tropical air, many trees in blossom and flowers to deck the earth'.

* By the 1850s settlers had moved to the area and Alpha Station was established in 1863.

* Alpha's moment of importance came when the railway arrived. The railway reached the town in 1884 and for a few years (until it reached further west to Jericho and Barcaldine) Alpha was the railhead for western Queensland. A real frontier town it gained a reputation for lawlessness. As one contemporary report declares, it was 'the scene of wild free-for-all fights on pay nights.'

* The town was gazetted in 1885. Many of the streets were named after poets. Hence there is a Milton Street, a Dryden Street, a Byron Street, a Tennyson Street, a Burns Street and a Kendall Street. It is local joke that the only street in town not named after a poet was Shakespeare Street (the main street) which was named after the local publican, George Shakespeare.

Alpha Information Centre, 45 Shakespeare Street, Alpha, tel: (07) 4985 1050 is open Monday to Saturday from 8.30am-12.30pm. It is operated by volunteers and provides information on the local region.

A simple overview of the town is provided on http://www.alphaqueensland.com.au. There is also information on the Barcaldine site at http://www.barcaldinerc.qld.gov.au/web/guest/tourismalpha 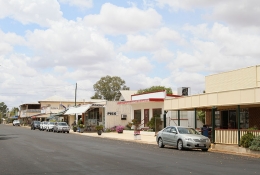 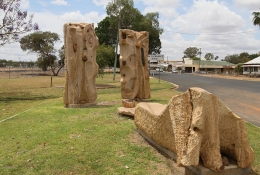 The Fossilised Forest of Alpha in the town’s main street 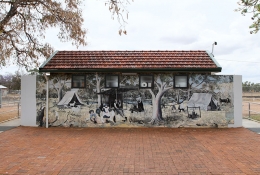 The impressive mural on the public toilets 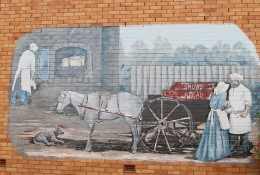 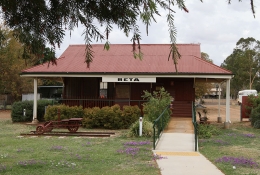 The Beta Railway Station behind the Tivoli Theatre Museum