Anakie is a small town where the main natural attraction is the Brisbane Ranges National Park. As a result of its easy day tripper proximity to Melbourne, it is popular for camping, bushwalking, wandering through bushland rich with native animals and, if you have children, spending a day at Fairy Park which is an "all the family" theme park. From the hills around the town it is possible to see Melbourne on the horizon.

Anakie, on the eastern edge of the Brisbane Ranges National Park, is 90 km from Melbourne via Corio or 103 km via Bacchus Marsh.

The town was named after "The Anakies", a group of three hills that overlook the town. It has been claimed that "anakie younang" was a Wathaurung expression meaning "little hill". Another interpretation is that Anakie meant "multiple birth" and it was a reference to the three hills which were known as the "three sisters".

Presbyterian Church, Anakie
Located at 1985 Ballan Road and built in 1865 out of squared coursed rubble basalt, fine axed basalt and a slate roof, this is a highly original and unusual church which met the spiritual needs of the large numbers of Scots who settled in the district.

Fairy Park
Located at 2388 Ballan Road, the Fairy Park is a fantasy and fairy tale theme park set in 9.5 ha of parkland and landscaped gardens. It is a family entertainment with a strong emphasis on smaller children with a castle as the centrepiece. The displays are divided into Fairytale Land which lncludes Red Riding Hood, Pinocchio, Rumplestiltzchen, Aladdin and Snow White; the Camelot Playground where children can crawl through dark dungeons, go on a carousel ride and enjoy giant slides while being surrounded by knights, princesses and Merlin; and the Elephant Rock Picnic Grounds which are perfect for picnics and barbecues. There is a kiosk, a model train exhibit and souvenir sales. It is open from 10.00 am to 5.00 pm with no admission after 4.00 pm. See http://www.fairypark.com for details of days when it is open and special information on birthday parties and family groups.

Flora and Fauna
There are 619 native plant species in the park (one-fifth of all species in Victoria). Many of them are rare (this is the only place to see the Brisbane Ranges Golden Grevillea and the velvet daisy-bush is rare) or are remote from their usual habitat. In spring wattles, hakeas, bush peas, varieties of orchids and grass trees abound. It is also possible to see Eastern Grey kangaroos, wallabies, echidnas, possums and gliders and over 170 bird species, including the yellow-tufted honeyeater, white-throated nightjar and rainbow bee-eater. The park reputedly contains Victoria's greatest density of koalas. They live in the park's mana gums.

Walks
Anakie Gorge Walk
This is a 3 km, easy walk which takes around 90 minutes one way. It links the Anakie Gorge Picnic Area (It has fireplaces, toilets, water and an information board) with the Stony Creek Picnic Grounds. The walk follows Stony Creek westwards, crossing the creek at several points, passing through Stony Creek Picnic Area and finishing at Lower Stony Creek Reservoir. Signs along the way identify koala habitats, rock escarpments, rock faults, flora types, bird-watching opportunities, bushfire scarification, creek pools. The alert walker may sight Eastern grey kangaroos, koalas, wallabies, echidnas, possums and sugar gliders. More than 170 species of bird have been observed in the park which also claims to have more than 619 species of native plant. The appeal of the walk is that it is easy and it passes through pleasant bushland. Expect the creek to be dry in the summer months.

Ted Erray Nature Circuit
This is an 8 km, three hour walk which leaves the Stoney Creek Picnic Ground and climbs steeply to the crest of the ridge then descends, crosses a broad watercourse, climbs to join the Outlook Track and then meanders by some impressive lookouts before descending to join the Anakie Gorge Walk.

Wadawurrung Walk
This walk takes an hour and is 2.5 km return. It offers fine views over both Anakie Gorge and Stony Creek Water Catchment. It starts at the Stony Creek Picnic Ground and on the way offers panoramic views of the You Yangs and Anakie Gorge.

The Burchill Trail
For those wanting a long walk through the park the Burchill Trail is 40 km long and usually takes 3 days (one way). It starts at Fridays Camping Ground and there are overnight camps at the Old Mill and the Little River Bush Camping Ground. For further information check out the Parks Victoria website http://parkweb.vic.gov.au/explore/parks/brisbane-ranges-national-park for more details.

Narada Homestead
The Narada homestead is located at 130 Mount Road, Anakie which lies east of the town. It was built in 1862 for John Browne and is an interesting L-plan single storey bluestone residence for John Browne. It is believed to have been designed by Jacob Pitman of Geelong and significantly altered in 1873 by Joseph Watts who added a second storey (also in bluestone) with Barrabool freestone dressings. It is now recognised as an interesting bluestone residence of conservative Italianate design and considerably enhanced by the addition of an unusually decorated cast iron veranda based on motifs of birds and butterflies. The building is a typical Western District homestead. It is not open to the general public but can be partially seen at the end of a road which runs off Mount Road. For more information check out https://www.onmydoorstep.com.au/heritage-listing/21/narada-homestead.

Steiglitz Historic Park
Located only 10 km west of Anakie, Steiglitz Historic Park is on the southern edge of the Brisbane Ranges National Park. Steiglitz, the first auriferous quartz mining site in Victoria, is a well-preserved and abandoned gold mining town "almost a ghost town" which is now an Historic Park administered and maintained by Parks Victoria. The appeal of the Historic Park is that it is held in aspic. The visitor can see important buildings, ruins, mines and other historic artefacts while the five walks around the Park are through bushland noted for its significant fauna and flora as well as the importance of its fossils. If you are planning a visit to Sovereign Hill in Ballarat this is a complementary experience. A gold town which has died. Heritage Consultant, Jane Lennon, has pointed out that Steiglitz was set up so people who have visited Sovereign Hill could appreciate the subtleties of the real thing - the skeleton of a town where the visitors have to use their imagination to see the busy streets, the noisy quartz-crushing machines and the diggers working in the creeks.”

Steiglitz's Courthouse and the Self-Guided Walk
Completed and opened in June, 1875 for a contract price of £1600 this slate-roofed red brick courthouse was built when Steiglitz was a flourishing gold town. It is nearly identical to the Court Houses built in Ballan and Lilydale. All were constructed by the contractor, Thomas Watt. The gold was so unreliable that the population declined and the court house was closed in January, 1879. It was reopened in 1895 during renewed mining activities but it ceased operations in 1899. Parks Victoria took control of the building in 1977. It is now a museum with a display of photographs, maps and relics which is open Sundays from 1.00 pm. to 4.00 pm. It is run by volunteers so sometimes it does not open. The museum has a pamphlet which outlines a self-guided 45-minute walk which identifies the remains of the town. If the courthouse is closed there should be a pamphlet in the information box. Otherwise it can be downloaded at http://parkweb.vic.gov.au/__data/assets/pdf_file/0006/603537/Map-Stieglitz-Historic-Park.pdf or there is very clear signage at the car park near the museum. It has a map of the town.

* Prior to European settlement the area was inhabited by the Wathaurong people.

* Pastoral leases were granted in the district in the late 1830s.

* In 1842 Frederick Griffith established a pastoral run he called Anakie.

* Gold was found in the Anakie hills in 1851. Gold mining created a great demand for timber and much of the surrounding timber was cut down.

* In 1858 the Post Office and a Wesleyan school was opened in the settlement.

* In 1859 the remaining members of the Wathaurong clan were relocated to a reserve which was closed in 1901 after minimal use.

* Sugar-growing was attempted at Anakie in the 1870s. It was not successful.

* The Brisbane Ranges became the main water source for Geelong when two dams were completed in 1873. The Stony Creek reservoir was the first concrete dam built in Australia.

* In 1907 parts of the Brisbane Ranges were declared a state forest and timber was harvested for fence posts and firewood.

* As early as 1918 the Victorian government was being lobbied to turn the Brisbane Ranges into a National Park.

* In 1957 koalas from Phillip Island were released into the Brisbane Ranges National Park.

* In 2001 the Stony Creek Reservoir was decommissioned.

* In 2006 over 5700 ha of the Brisbane Ranges National Park were burnt out by a serious bushfire.

Useful additional information can be found at http://web.archive.org/web/20050309013520/www.arts.monash.edu.au/ncas/multimedia/gazetteer/list/anakie.html. 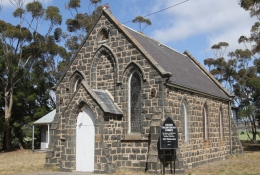 The Anakie Presbyterian Church built in 1865. 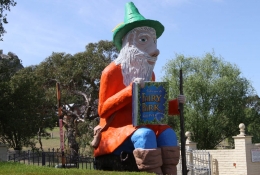 The entrance to Fairy Park. 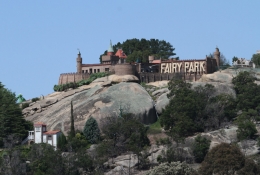 View of the castle at Fairy Park from the road to Anakie. 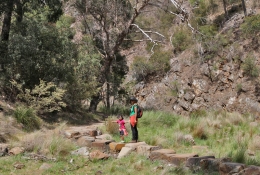