Time has stood still at Ansons Bay. This small fishing village on the far north eastern coast of Tasmania hasn't changed since the 1940s. The temporary fibro houses, the tinnies waiting to be pushed off in search of fish and the quiet and sleepy holiday ambience make it one of those wonderful secrets which is known only to the locals and a select group of anglers. In The Centenary of Portland, an early guide to the area, the region is described in the following romantic terms:
'Only one old tree is standing, solid yet, but only one
Where the milking and the branding, and the slaughtering were done
A hundred years ago.'

That is pretty much the way it remains.

Ansons Bay is 158 km east of Launceston via Scottsdale.

On 5th March, 1788 Lieutenant Henry Lidgbird Ball, whilst exploring the east coast of Tasmania, named the bay after George Anson, a British admiral who was fondly remembered as a great explorer and had been the first Lord of the Admiralty from 1751 until his death in 1761.

Eddystone Lighthouse
The main attraction in the area is the Eddystone Lighthouse which is located 13 km north of Ansons Bay at the northern end of the Bay of Fires. Eddystone point was first sighted by Captain Tobias Furneaux, in 1772 when he was captain of the HMS Adventure. Furneaux was accompanying Captain James Cook on his second voyage to the South Seas when he was separated from the rest of the fleet. He explored much of the eastern coast of Van Diemen's Land and named the point, which obviously had no lighthouse at the time, after the famous Eddystone lighthouse near Plymouth on the English south coast. The lighthouse was built out of pink granite in 1889, stands 42 metres above sea level, and can be seen from 26 nautical miles out to sea. Check out https://lighthouses.org.au/tas/eddystone-point-lighthouse/ for detailed information about the lighthouse.

The highlight of the area is the very upmarket Bay of Fires 4-day walk. See http://www.bayoffires.com.au/. It is not cheap being over $AUD500 a day per person - but that it does include all meals, accommodation and guides.

* Prior to European settlement the Ansons Bay area was known as Larapuna to the local Pyemmairrrener Aboriginal people who had lived there for thousands of years.

* The first European to sight the area was Captain Tobias Furneaux who, in 1772 when he was captain of the HMS Adventure and whilst accompanying Captain James Cook on his second voyage to the South Seas, was separated from the rest of the fleet and explored much of the eastern coast of Van Diemen's Land.

* European settlers moved into the area in the 1830s

* The dominant industry was logging but, always, there was the potential for fishing and by the twentieth century the milder weather and good supplies of bream had attracted anglers to the area.

* In 1889 the Eddystone Lighthouse was built.

* As recently as 1913 the first motor car in the district arrived. It was driven a Dr Anderson. That year a receiving office, a simple kind of post office, was opened.

* Today Ansons Bay is a holiday destination for campers and anglers.

* In 2010 the Tasmanian government signalled its intention to return lands to the traditional owners who, in turn, talked about developing Aboriginal cultural tours in the region.

There is no accommodation or eating at Ansons Bay. There is no food north of St Helens.

For walkers http://www.bayoffires.com.au is useful; for anglers there is expert advice at http://www.tasfish.com/index.php?option=com_content&view=article&id=125:ansons-bay&catid=29:issue-3-april-1996&Itemid=60; and for people wanting information about the facilities at the Bay of Fires check out https://parks.tas.gov.au/explore-our-parks/bay-of-fires-conservation-area. 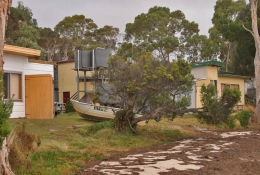 Fibro holiday houses and a tinnie for fishing on the beach at Ansons Bay. 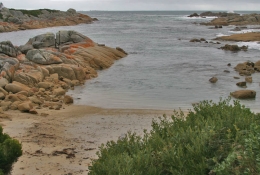 The rocks below the Eddystone Lighthouse. 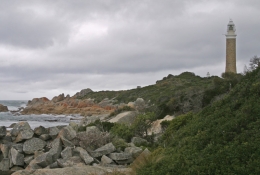 The Eddystone lighthouse on a typically cold and windy day. 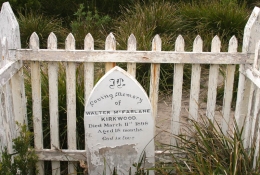 The grave of a child captures the intense loneliness and isolation of life at the Eddystone lighthouse. 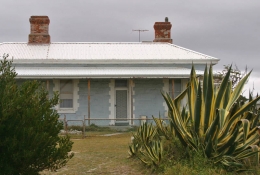 The lightkeeper's cottage at the Eddystone Lighthouse.