Antwerp is nothing more than a grain silo, a general store and small number of houses in the middle of the Wimmera district. The importance of the town lies in the Ebenezer Mission to Aborigines which stands in ruins on the Dimboola side of the town. Before the mission the area around Antwerp was characterised by mallee scrub (eucalypts), native pines, red gums and ti-tree.

Located 354 km north west of Melbourne via Ballarat and Stawell. It is 18 km north of Dimboola.

Antwerp was named after the city in Belgium. One of the earliest settlers in the area was Horatio Ellerman who arrived in Victoria in 1846 and successfully applied for 130,000 acres which he named 'Antwerp'. It was the city where he had been born.

Ebenezer Mission
The Ebenezer Mission is located 2 km off the main road between Jeparit and Dimboola about 1 km south of the town. In 1858 two Moravian missionaries, Brother Hagenauer and Brother Spieseke, arrived in Victoria to work among the Aborigines. In 1859 they moved to the Wimmera and chose a site about 3 km south of Antwerp station on the Wimmera River. The government provided 1,897 acres for the Ebenezer Mission Station. The aim was to Christianise the local Aboriginal population. Conditions could be harsh. Only those Aborigines who attended church were entitled to rations. The graves at the ruins of the church are particularly interesting. There are graves of both Aborigines and Lutheran missionaries. The missionaries had been born in places like Bohemia and Prussia. The mission was closed in 1904 and over the next 20 years many of the Aborigines were forcibly moved to the Lake Tyers Mission in Gippsland. There is a very detailed history of the mission at http://www.germanaustralia.com/e/ebenezer.htm. In 2018 it was not accessible and there was a sign on the high fence all around the buildings which read: "These facilities are currently closed for repairs and maintenance. Unauthorised entry is prohibited. Trespassers will be prosecuted. Access and entry to this property is only permitted by approval from Barengi Gadjin Land Council Aboriginal Corporation of Goolum Goolum Aboriginal Co-operative. Please direct all enquiries to Barenji Gadjin Land Council 03 5381 0977.

The Scale of the Mission
There is a map on the fence surrounding the church which indicates that, when it was fully operational, the mission comprised the church and graves as well as a homestead, kitchen, house, store room, school, butcher shop, buggy shed, store room, cart shed, stable, cow shed, three log huts, a weatherboard and iron shed, limestone huts, a chock and log fence, a windmill, a 3 inch water pipe which ran from the Wimmera River and a number of fences.

* Prior to the arrival of Europeans the Wergaia Aborigines lived in the area and relied on the local river for fish and water.

* The area was named Wimmera by Major Mitchell who passed through the district in 1836.

* Horatio Ellerman named his property 'Antwerp' after the city in Belgium where he was born.

* Ellerman's son, Clarence Henry, was born in 1852 and was the first European child born in the Wimmera.

* In 1858 two Moravian missionaries, Brother Hagenauer and Brother Spieseke, arrived in Victoria to work among the Aborigines. In 1859 they moved to the Wimmera and chose a site about 3 km south of Antwerp station on the Wimmera River.

* By 1859 they had built a hut and, during the year with help from the local Aborigines, they built a church.

* The mission's Norman style church was consecrated in 1860. An Aborigine named 'Pepper' was baptised - thus becoming the first Christian Aborigine in the Wimmera.

* By the late 1880s Antwerp had a large eucalyptus oil distillery run by the Eucalyptus Mallee Oil Company.

* The government took over teaching at the mission in 1891. That year saw the opening of the Antwerp Post Office.

* By 1894 the railway from Dimboola passed through Antwerp.

* The last wedding in the Ebenezer Mission was held in 1899.

* In 1995 the railway line was converted to standard gauge.

There is no Visitor Information in Antwerp.

http://www.abc.net.au/missionvoices/ebenezer/mission_history/default.htm is a good history of the Ebenezer Mission. 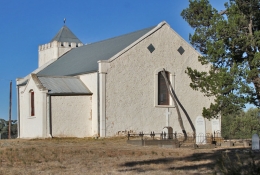 The Ebenezer Church (1860) which has been recently painted. 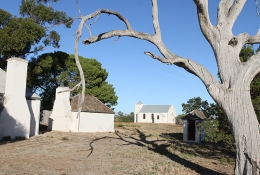 A view of the church and the kitchen in the foreground 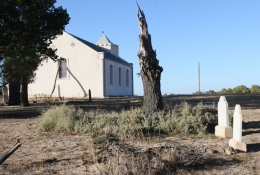 The graves of the missionaries beside the church. 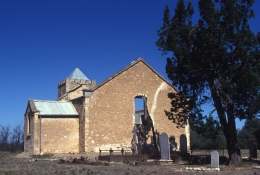 The memorial to the Aborigines buried in the Antwerp Cemetery