Towns like Ararat, which grew to prominence in the goldrush era, are models of 19th century affluence and opulence. The public buildings are huge, elegant and often ostentatious. The main street is wide and, in the case of Ararat, it has a large number of impressive structures. Today the town is the commercial centre of an agricultural district where wheat, oats, fine wool and wine dominate and, because it is an important service centre, it has an important industrial base. To walk up the main street, and explore the town's many historic buildings, is to be reminded of how much wealth flowed from gold.

Ararat is located 205 km west of Melbourne at the junction of the Western and Pyrenees Highways. It is 332 metres above sea level.

An early explorer and settler named Horatio Wills drove 500 cattle and 5000 sheep from the Murrumbidgee to the Ararat area in 1839. In early 1840, nearing the end of their journey, Wills and his family and workers spent a night on a hill they named Mount Ararat "for like the Ark we have rested here".

The Ararat Rural Council has produced an excellent booklet - Historic Ararat: Walking and Driving trails - which lists a total of 34 places of interest on the walking tour of Barkly Street and adds another 17 beyond Barkly Street. It is detailed and comprehensive. Most of the buildings are genuine must-see experiences.

Barkly Street Walking Tour
This is a pleasant walk up and down the main street which takes between 60-90 minutes and covers around 2.2 km. Here are the highlights:
1. View Point
Known as the Edith Cavell Reserve it is named after a nurse who was killed by the Germans in 1915 after helping Allied prisoners escape. This location is the oldest part of European settlement in Ararat.
2. Court House Hotel
The original Court House Hotel, made from wood and iron, was built on this site between 1858-1859. It once had a huge ballroom and a special supper room. It has been changed extensively over the years.
4. Briggs Francis & Associates
Located at 94 Barkly Street, and designed in a Renaissance Revival style, this building was constructed in 1864, has served a number of different functions (doctor's surgery, solicitors offices), and is recognised as one of the oldest buildings in the main street.
5. Vine Street Store
Located at 104-106 Barkly Street, this building was constructed in 1874 for G.W.H. Grano. Permission was granted for Mr Grano to plant a grapevine which has survived to this day. It was first planted in the 1870s and today cuttings have been used to enhance a number of buildings along the main street.
9. Blizzards
Located at 156-158 Barkly Street, this impressive building was designed by James Irwin and built in 1914-1915. The Heritage Guide to the town notes: "The stepped gable is unusual and may have Dutch or South African origins, an echo of the Boer War. There is a dramatic blind arch motif. The first floor windows have alternate square and arched tops. The shop front is intact but the original veranda has been removed."
13. State Savings Bank
Located at 224 Barkly Street and designed by P.S. Stephens, it operated as a bank from 1912 to 1962. It is an interesting mixture of styles with an oriel window which is Queen Anne style and a large semi-circular window which is pure Romanesque Revival.
17. Catholic Church Precinct
An impressive collection of buildings located between 302-304 Barkly Street which includes the beautiful and ornate Brigidine Convent of the Sacred Heart, built in Collegiate Gothic style in 1899 (marvel at the beauty of the ironwork), the modest presbtery (1871 - and specifically designed to remain cool during the hot summers) and the Immaculate Conception church, a bluestone building designed by A.A. Fritsch in a Romanesque Revival style.
18. Dominica
Located at 291 Barkly Street is 'Dominica' (1899), a two-storey mansion with fine gardens. It is a private home and hidden from public view by a large cypress hedge. It was built by Theo Grano, the son of the man who established the Vine Tree Store in the late 1850s which supplied the early miners with building materials. The mansion was named after the island of Dominica in the West Indies which was the original home of the Grano family.
20. Langi Morgala Museum
Located at 48 Queen St is the Langi Morgala Museum. The name is a local Aboriginal term meaning 'home of yesterday'. This bluestone building was erected as a wool and grain store in 1874 and used to make parachutes during World War II. Displays relate to the town's gold mining origins, the early Chinese inhabitants, pre-colonial Aboriginal history, the role of women in the colonial period, the development of the railways in the district and rural life. It is open on Tuesdays, Wednesdays and Thursdays from 10.00 am - 3.00 pm and on Saturday from 1.00 pm to 4.00 pm, tel: (03) 5352 3117.
21a. Shire Hall
Located beside the Town Hall is the imposing facade of the Classical Revival Shire Hall (1871) designed and built by Alexander White, the shire engineer and architect. Characterised by a robust colonnade capped by a strong pediment, it is the shire's most impressive building. The handsome ironwork was cast at a foundry in Ballarat.
21c and d. Town Hall , Boer War Memorial Fountain and Art Gallery
The town's Classical Revival town hall was built in 1898-1899 by James Irwin to a design by Molloy and Smith of Ballarat. Its symmetrical facade consists of a central clock tower flanked by two bays with columns and pediments. Out the front is an impressive formal garden and a Boer War memorial fountain (1905). The fountain was obtained in Melbourne and was ready made. It cost between £100-£125. The Town Hall now contains both a performing arts centre and the Ararat Regional Art Gallery which has an impressive permanent collection particularly of textiles and fibres. For more information check out http://vhd.heritage.vic.gov.au/search/nattrust_result_detail/67279.
23. Mechanics' Institute
Constructed in 1909 after a design by James Irwin this wonderfully ornate building, which belongs the the Federation era, combined a reading room and library on the ground floor with a large floor for meetings above it.
24. McGibbony Building
Located at 161 Barkly Street, the first building was completed in 1865 and subsequently restored (1870) and remodelled (1910) so that it now has a distinctive Federation era look.
28. London Chartered Bank
Now the ANZ Bank, and located at 107 Barkly Street, this bank was completed in 1868 and like most banks of the time it had a handsome residential area (for the bank manager) above the bank offices. It was designed by leading Melbourne architect, Leonard Terry, in a Renaissance Revival style.
31. Vindel House
Located at 90-93 Barkly Street is a bluestone building with a fine oriel window. The first part of the building was erected in 1858 as a sub-treasury and assay office which prepared the gold for the gold escort which took it under heavy guard to Melbourne. The post office section was completed in 1862. The design of the Post Office was by a leading English architect, William Wardell.
33. Court House
Located on the corner of Barkly Street and Ligar Street is the town's second courthouse, built to a Romanesque design in 1866-67.

McDonald Park Nature Reserve
Located 4 km north-west of the city centre along the Western Highway is the 152 ha McDonald Park, a flora and fauna reserve where there are bushwalks through native shrubs and springtime wildflowers. Of particular interest is the McDonald Park Nature Walk. There is a useful blog which provides details of the walk. Check out http://bushwalkjournal.blogspot.com.au/2006/09/mcdonald-park-nature-walk-ararat-hills.html.

Langi Ghiran State Park
Located 17 km south-east of Ararat on the Western Highway, Langhi Ghiran State Park is a reserve of 2695 ha dominated by two granite mountains - Mount Gorrin and Mount Langhi Ghiran (950 m). This area was used by local Djab Wurrung Aborigines prior to white settlement and is a place of sacred sites and Aboriginal rock art. Mount Langhi Ghiran (named after the Aboriginal word for the yellow-tailed black cockatoo) was climbed in 1836 by Thomas Mitchell. The gently sloping open woodland plains around the mountains have been formed by granite sand washing down from the peaks. The slopes were once used for grazing.
Access from Ararat is via Kartuk Road which passes through open redgum and yellowbox woodland where it is possible to see eastern grey kangaroos, echidna, wallabies and birds. The road reaches the Langi Ghiran picnic and camping area which is the start of a walking track which follows Easter Creek for one kilometre to the Langi Ghiran Reservoirs, which were built of local granite in 1880. The walk continues for another kilometre along the old Easter Creek water-race to a scenic lookout and the Easter Creek Track which heads south and on to the summit of Mount Langhi Ghiran which has panoramic views west to the Grampians.
The Langi Ghiran track connects Kartuk Road and the Western Highway. Near the highway is the Lar-ne-Jeering Walking Track which heads off to an Aboriginal shelter which contains some interesting rock art. There is an excellent downloadable brochure and map at http://parkweb.vic.gov.au/__data/assets/pdf_file/0019/313831/Park-note-Langi-Ghiran-State-Park.pdf.

* Prior to the arrival of Europeans, the Djab Wurrung Aborigines inhabited the Ararat district. They called the district 'Butingitch'.

* In 1836 the first Europeans to pass through the area were the party of explorer Thomas Mitchell on their expedition through 'Australia Felix'. Mitchell's positive report on the land east of the Grampians encouraged squatters to move into the district.

* The first squatter in the area was Horatio Spencer Wills. With his family and some stockmen, Wills drove 500 cattle and 5000 sheep from the Murrumbidgee in 1839 and established the Lexington run.

* Gold was first discovered by Joseph Pollard in the vicinity at Pinky Point, 6 km west of present-day Ararat, in 1854.

* Other leads followed and there were soon 9000 people in the area which was known as 'Cathcart'.

* In 1855 the Victorian Government placed a £20 poll tax on every Chinese person entering Victorian ports. Consequently Chinese miners landed in South Australia and walked across to Victoria.

* In 1856 a prospector, who was also an escaped bushranger, 'Gipsy' Smith, killed Sergeant John McNally during an attempted arrest on the Cathcart goldfields. The local post office opened that year.

* One party of 700 Chinese miners reached Ararat while en route to Clunes and discovered alluvial gold in a stream and thus the Canton Lead was established in 1857.

* In 1857 an Anglican and a Catholic school were opened in the town. That year saw the first edition of the Ararat Advertiser published.

* Within two weeks of the discovery the population of the Ararat district had grown to around 20,000 (some sources say 50,000). 93 kg of gold were shipped out in the first three weeks and 3 tonnes were officially escorted from town in the first three months.

* Ararat's first newspaper was published in 1857.

* In 1858 the town was named after the nearby mountain and declared a municipality.

* The post office was opened in 1862. That year saw the breaking up of the larger estates in the area.

* Ararat was advanced to the status of a borough in 1863.

* A mental asylum, the Aradale Mental Hospital, was opened in the town in 1865. A government school was built that year.

* The railway arrived in 1875 and Ararat became a major rail junction.

* Reticulated water reached the town in 1876.

* In 1878 the local railway was extended to Stawell and Murtoa.

* In 1890 a railway line to Avoca and Maryborough was opened.

* The Mafeking goldrush at Mt William in 1900 saw a revival of gold fever and Ararat's population rose to 3,000.

* After World War I, 8,000 ha of land was broken up for soldier settlement.

* In 1923 a postal and telegraphic communications centre was opened in the town.

* In 1925 the Western Highway was routed through the town.

* In 1961 Lake Fyans became the town's primary source of water.

There is a useful Ararat Rural City website check out https://www.ararat.vic.gov.au. 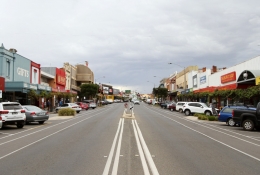 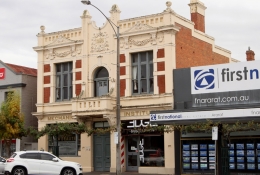 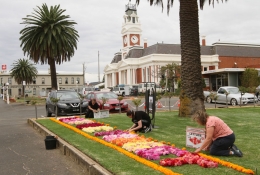 Preparing the floral "Lest we Forget" for Anzac Day with the Town Hall in the background. 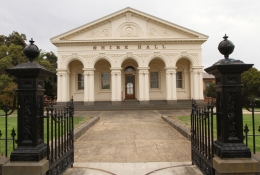 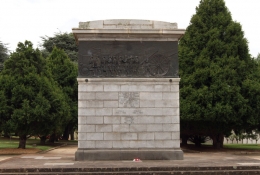 The cenotaph modelled on the Cenotaph in Whitehall, London and built in 1930. 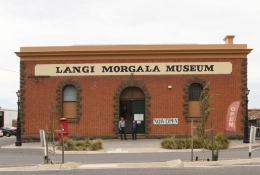 The Langi Morgala Museum, built in 1874 as a wool and wheat store. 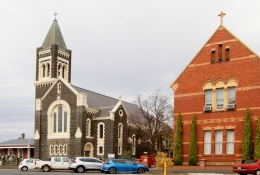 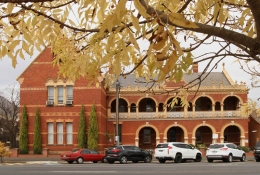 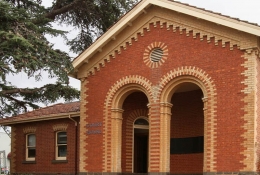