Historic port and holiday destination on the Yorke Peninsula.

Ardrossan is an interesting mixture of a quiet family holiday destination and a port. It is located on the western shore of Gulf St Vincent and is an important port on the Yorke Peninsula with a 1000 metre long jetty and bulk grain storage facilities. South Australians love to head for the coast during the hot summer months and Ardrossan, being only ninety minutes from Adelaide, has become a popular holiday destination with good swimming and fishing facilities.

Ardrossan, a port and bulk grain facility,  is located at the top of the Yorke Peninsula 149 km northwest of Adelaide and 23 m above sea level.

The town was surveyed in 1870 and named Ardrossan (in Gaelic it means a little promontory) in 1873 by Governor Fergusson after a port in North Ayrshire, Scotland.

Ardrossan & District Historical Museum
The Ardrossan & District Historical Museum is located in Fifth Street in the powerhouse of the former factory where the stump jump plough was manufactured. It has an interesting display on the history of the stump jump plough, a collection of tractors and farm machinery, relics from the Zanoni, a wheat clipper which sank off the coast in 1867, and the mosquito fleet, the small ketches which plied the waters around Ardrossan. Open Sunday from 2:30 p.m. to 4:30 p.m. as well as school and public holidays or by appointment Tel: (08) 8837 3939. For more information check out http://www.nationaltrust.org.au/sa/ArdrossanMuseum

The Stump Jump Plough
Located in the Foreshore Park beside East Terrace is a Stump Jump plough. Adrossan considers this uniquely Australian invention to be its finest contribution to the history of Australia. The plaque at the plough says simply "A tribute to Clarence H. Smith who perfected and manufactured stump jump ploughs at Ardrossan 1880-1935." The plough, which was invented by Richard B. Smith, was patented in 1877 and manufactured by the Smith Brothers. At its peak the Smiths produced 14 ploughs per week. Why was it so important? Because so much of the Australian wheatbelt was covered in mallee scrub and trying to grub it out was almost impossible because of the stumps and roots. The Smith brothers invented a plough which would jump over a mallee stump. So successful was the invention that by 1907 the factory was employing up to 130 men. The factory closed in 1934 and the factory's power house was gifted to the National Trust in 1972. It opened as a museum the following year.

Mines - Dolomite and Salt
The BHP open cut mine (they are now known as One Steel) is located behind the One Steel Lookout south of the town and is well worth visiting. It was opened in the mid-1950s so the dolomite - which is used as a flux in the steel making process - could be mined and shipped to Whyalla and Port Kembla. The jetty was opened around the time the mine started producing and today it is used to ship both dolomite and salt (from solar saltpans at Price up the coast).

BHP [One Steel] Lookout
Located 2 km south of the town on the Yorke Highway, the BHP (now One Steel) Lookout provides superb views (to the south) of the open cut One Steel dolomite mine and, to the east, across the town's jetty and wheat silos to the broad panorama of Gulf St Vincent.

Zanoni Wreck
The Zanoni, a wheat clipper which sank off the coast in 1867, is located about 20 km south of Ardrossan. It is one of 85 wrecks off the coast of the Yorke Peninsula and is a popular scuba diving destination. Permits to dive have to be obtained from the Department of Environment and Natural Resources.

Fishing and Crabbing
The Ardrossan area is known as "The Home of the Blue Swimmer Crab" and both Ardrossan and Pine Point are popular in the summer months with enthusiasts who scour the beaches at low tide or use nets from the jetty. The waters of the Gulf are known not only for the blue swimmer crabs but also for snapper, mulloway, snook, squid, garfish, Tommy Ruffs, mullet and King George whiting.

* For thousands of years prior to European settlement the Yorke Peninsula was inhabited by people from the Narungga Aboriginal language group.

* The opening of agricultural land on the Yorke Peninsula in the 1860s saw the wheat farmers lobbying for a port to ship their produce across to Adelaide.

* In 1876 Richard Bowyer Smith conceived of the idea of a stump jump plough.

* In 1880 Richard's brother, Clarence Smith, opened a blacksmith's shop in the town and effectively invented the stump jump plough.

* The town jetty was built in 1877-78 and used a simple tramway system to load vessels.

* In 1952 the wheat silos, the largest grain storage centre in Australia at the time, came into existence.

* In the 1950s BHP started mining dolomite for steel manufacture in Whyalla and Port Kembla.

* Ardrossan is subject to great tidal variations so that, when it is low tide, the water can be anything up to 100 metres from the shoreline. This means that today the wheat from the grain silos is trucked to Port Giles which is a deep sea port.

There is a good overview of the town's history at http://ardrossan.sa.au/history and http://www.nationaltrust.org.au/sa/ArdrossanMuseum has a detailed history of the stump jump plough. 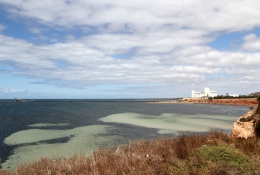 The view south from Ardrossan includes the 1000 metre long jetty and the grain storage silos. 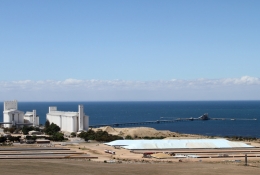 The jetty, the silos which store 420,000 tonnes of wheat, the dolomite and the salt - all central to the economy of Ardrossan. 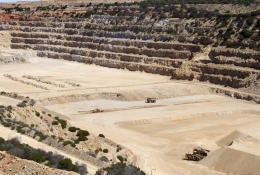 The open cut dolomite mine viewed from the One Steel lookout south of the town. 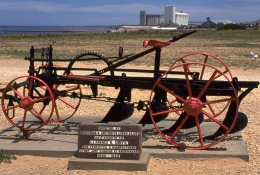 The memorial to Clarence H Smith who invented the stump jump plough which revolutionised farming in Victoria and South Australia.