Arkaroola, and specifically Arkaroola Wilderness Sanctuary, is the personal vision of the late Dr Reg Sprigg who purchased the 610 square kilometre (61,000 ha) property in 1968 and slowly converted it into a wildlife sanctuary complete with a lodge. It is a region characterised by dramatic, ancient hills (some of the rocks are estimated to be older than 1000 million years), beautiful waterholes and a truly harsh and dry environment. The Adnajamathana Aborigines believed that Arkaroo, a mythical monster, drank Lake Frome dry and then crawled into the mountains. As Arkaroo moved through the land he created the Arkaroola Creek. Where he stopped and urinated he left the waterholes which are one of the most beautiful parts of the Arkaroola area. Today it is a combination of the remnants of a 19th century copper mine and smelting operation; a wilderness sanctuary; a superb astronomical observatory suited to the sublime desert night skies; and an outstanding 4WD route to Sillers Lookout which provides some of the most spectacular and panoramic views anywhere in inland Australia.

Located 687 km from Adelaide via Port Augusta (from Port Augusta it is 395 km) with most of the road being sealed but the last section from Lyndhurst being good quality desert dirt road.

The name Arkaroola comes from the local Adnajamathana Aborigines whose stories included a mythical creature named Arkaroo which drank Lake Frome dry and as he crawled across the land created the Arkaroola Creek. It was said that the waterholes were created when he stopped and urinated.

Old Copper Mine Ruins at Bolla Bollana
Located only a short distance from the accommodation is the remarkable Bolla Bollana copper smelter with its distinctive beehive shape. It was erected in the 1890s to smelt copper ores which were brought to this isolated smelter from the mines at Yudnamutana, Daly and Wheel Turner by bullock wagon. At the time the area was home to Cornish miners. The special high temperature bricks were brought from the Midlands of England while the other bricks were baked in a round house kiln.

Paralana Hot Springs
Located 29 km, on a very windy road (Google Maps estimates that the 4WD drive will take nearly 90 minutes), are the Paralana Hot Springs. The sign at the springs is explicit: "The geothermal waters of Paralana Hot Springs issue from major earth crustal fractures in this vicinity that date back one billion years. These geological faults which once poured forth large quantities of lava, now facilitate continual geological movement of the surrounding mountain region. These waters are heated by hot rock at shallow depths, and by radioactive mineral decay. Carbon dioxide, nitrogen, radon gas and helium bubble forth continuously. Because the Paralana Springs contain small amounts of naturally occurring radioactive elements, swimming in or drinking the water constitutes a health hazard."
The Aboriginal story about the springs tells of two men who were travelling together when one tried to put out his fire stick (it was made of the acacia known as 'Dead Finish') in the spring and the spring remains bubbling to this day. The Adnajamathana name for the springs is "Vadaardlanha". Camping in the area is prohibited because of the possible build up of deadly gases. The water reaches the surface at near boiling point.

Guided and Self Drive Tours
Arkaroola offers excellent 4WD guided tours with guides experienced in the region's geology, biology and botany. The trips include:

* The Ridgetop Tour - this is a tough, but hugely enjoyable and genuinely remarkable, 4WD journey from the Lodge to Sillers Lookout which offers amazing panoramic views over the vastness of Lake Frome to the desert beyond. On the journey the participants travel through red granite countryside and through rocks which are 1,600 million years old.

* Waterhole Tour - there are guided tours of the waterholes along Arkaroola Creek. The appeal, apart from the beauty of the waterholes, is the opportunity to see the wildlife of the area particularly the rare and endangered Yellow-footed Rock Wallaby. For more information check out https://www.arkaroola.com.au/waterhole.php.

The Life of Dr Reg Sprigg
The late Dr Reg Sprigg was a fairly ferocious self publicist. While he was alive (he died in 1994 and his ashes have been scattered around Arkaroola) the walls of the bar were covered with mementos of his achievements which ranged from the impressive (he had been awarded an Order of Australia in 1983 and honorary doctorates from both ANU in 1980 and Flinders University in 1990) down to idiosyncratic - Christmas Cards from Don Dunstan, the one-time Premier of South Australia.  But Reg Sprigg really was a remarkable man. His geology lecturer, Douglas Mawson who later became the famous Antarctic explorer, described Sprigg as “precocious, but gifted”.
When Kristin Weidenbach wrote Sprigg’s biography (amusingly named by the punning title Rock Star) her publisher summed up his remarkable career by noting “Reg is regarded as the greatest geologist of his generation and one of the best Australia has produced.
“By the age of 30 he had discovered the oldest fossils in the world and some of its deepest under-sea canyons. He had worked at Australia’s first two uranium mines and searched for material to construct the world’s first atomic bomb.
“By the time he was 40 he had helped found Santos and discovered the great Cooper Basin oil and gas fields—Australia’s largest on-shore petroleum province; he had set up the largest private geological consulting firm in the country; built his own boat and diving bell; and mastered the primitive art of scuba diving.
“By the time he was 50 Reg had driven the first vehicle across the Simpson Desert and crossed the continent from north, south, east and west. He had established his own exploration company, Beach Petroleum; and also launched Arkaroola Wildlife Sanctuary, one of Australia’s first eco-tourism resorts.
“The rest of his life he would devote to the unlikely bedfellows of mining and conservation, and to his insatiable love of geology.”
Reg Sprigg purchased 61,000 ha at Arkaroola in 1967 and now, over 50 years later, it is still being run by members of the Sprigg family with his son, Doug, now driving the daunting track to Sillers Lookout (the views across Lake Frome are some of the most dramatic desert panoramas anywhere in Australia) and, as an added bonus, taking visitors to the remarkable observatories on the property where the desert skies offer a wonderland of astronomical sights.
For a more detailed account of Reg Sprigg's rich life check out the Australian Dictionary of Biography at http://adb.anu.edu.au/biography/sprigg-reginald-claude-reg-19112.

* Prior to the arrival of Europeans the area was home to the Adnajamathana Aborigines.

* The first European into the area was the explorer Edward Eyre who passed through the area in 1840.

* By 1857 G. W. Goyder (famous for Goyder's Line - the northern limit of agriculture in South Australia) was surveying the land in the area. That year saw the first pastoral selection in the district.

* In 1860 miners moved into the area to exploit the copper which had been discovered at Yudnamutana.

* The savage drought of 1863 drove most of the miners out of the area.

* By 1876 most pastoral leases had reverted to the state.

* In 1903 rubies and sapphires were discovered near Mount Pitt.

* By 1910 a smelter had been built at Yudnamutana and uranium had been discovered at Mount Painter. The first person to identify the uranium in the area was the geologist and Antarctic explorer, Douglas Mawson.

* In 1924 rich deposits of uranium and radium were discovered.

* By the 1930s the area had been overrun by wild camels and donkeys.

* In 1935 the Arkaroola property was fenced and an eradication program had commenced. The program, initiated by the Greenwood brothers, was an attempt to convert the area to grazing land.

* By 1945 the eradication program had been successful.

* In 1948 there was a short and unsuccessful attempt to open Arkaroola as a health spa.

* By 1979 Sprigg was a trustee of the World Wildlife Fund and actively involved in protecting the endangered yellow-footed rock wallaby at Arkaroola.

* Dr Reg Sprigg died in 1994 in Scotland. His ashes were scattered at Arkaroola

Ningana Information Centre
The Arkaroola Lodge has an excellent natural history and geology museum which includes Aboriginal artefacts, photographs, geological maps and fossils. The staff can answer all questions about the area. Tel: (08) 8648 4848.

There is an excellent and comprehensive local website. Check out https://www.arkaroola.com.au. 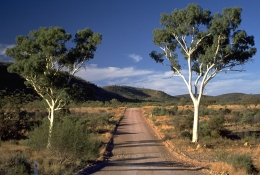 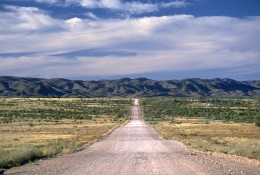 The road to Arkaroola 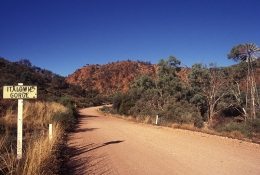 The road through Italowie Gorge on the way to Arkaroola 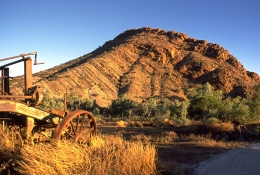 The mountain in front of the accommodation at Arkaroola at sunset 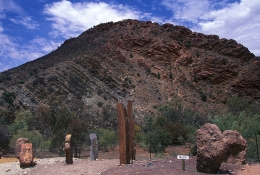 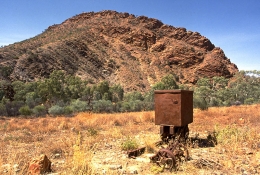 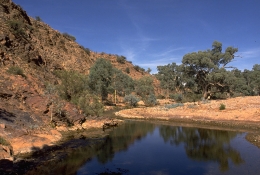 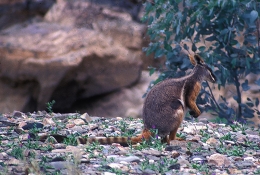 An endangered Yellow-footed Rock Wallaby on the Ridgetop Tour 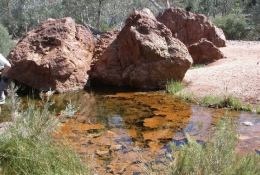