Arltunga is a fascinating rarity: a gold rush town in the middle of some of the harshest desert country in Australia. It is worth visiting because the climate has held so much of the old town in aspic and the visitor can easily imagine what life was like during the first gold rush and the subsequent period when the government works were operating. The curious visitor can still see pieces of meat safes, rusted wire, rusted cans, and shards of broken glass littering the ground.

There are photographs and information boards in the excellent Visitor Centre which explains what life was like for the miners who briefly settled in the town.

'Life on the Arltunga goldfields was very hard. Arltunga was extremely isolated, it lacked water, had limited supplies of basic foods, suffered extremes of temperature, and the cost of living was exorbitant. To reach Arltunga in the 1880s you would need to walk or ride alongside the Overland Telegraph Line from Oodnadatta to Alice Springs, then follow the MacDonnell Ranges east for around 120 km. This would take at least a week and often longer in temperatures which often exceeded 40°C. The shortage of water meant that fresh vegetables could not be grown and limited water supplies were drawn from wells and water soaks in creeks. Because of the lack of feed and water for stock the transportation costs for food were very high. These high costs were passed onto the Arltunga residents. Aborigines, miners, stockkeepers, publicans, battery managers, engine drivers, fitters, carpenters, labourers, clerks, cooks, blacksmiths, assayers, foremen, battery hands, housekeepers, stockmen and pastoralists, are some of the residents of early Arltunga.'

The drive to Arltunga from Alice Springs is a mixture of 77 km sealed road and 33 km dirt road that is accessible by 2WD in dry weather.

Arltunga, a mining ghost town in the desert, is located 110 km east of Alice Springs, 1610 km from Darwin and 1634 km from Adelaide.

It is claimed that the town was named after a subgroup of the eastern Arrernte Aborigines who had been living in the desert area for tens of thousands of years before the brief mining boom that established the town.

Government Works
Located 3.7 km north of the Visitor Centre the Government Works are at the heart of any visit to the Historical Reserve. They were built as a result of an 1886 petition to the South Australian government (which administered the Northern Territory at the time) and as a result in 1888 a Battery and Cyanide Works were opened and ore was being crushed to extract the gold. The Government Battery included administration offices, a battery shed, assay and bullion rooms and residences for the government employees. The buildings are mostly made from local stone with schist and quartzite rocks being stacked to form dry walls or cemented with mud or lime mortar. Some of the less-permanent buildings were made from timber, corrugated iron and there were some canvas tents.

Because Arltunga was the first European settlement in the harsh environment of Central Australia the buildings incorporate heat-modifying innovations including recessing them into the ground for insulation and orientating the main hallway towards the cooler south-easterly winds. One building even had an underground vent system that funnelled cooler air into the storage room.

The Old Mines
To the east of the Government Works and the Old Police Station are a number of historic mines including MacDonnell Range Reef Mine and Golden Chance Mine (both a pleasant walk from the road), then further east are the Joker Gorge Mine and the Great Western Mine. If you have a 4WD you can continue beyond the Great Western Mine to the White Range cemetery where a few sad graves cling to the side of the hill.

Interestingly there are no actual houses left from the original township. The common explanation is that a rumour spread that there was gold hidden in the walls of the houses and consequently they were knocked down by people believing there was 'gold in them there walls". Of course it was only a rumour. No gold was found.

White Range Cemetery
A sad reminder of the harshness of the area is the White Range Cemetery to the west of the Government Works and Old Police Station and beyond the Crossroads. It is nothing more than a few hastily constructed wooden crosses. There is excellent signage listing all the people buried in this sad, isolated cemetery.

Fossicking
It is possible to fossick at Arltunga but only outside the Historical Reserve. There is a special Fossicking Area (check the map) near Paddy's Rockhole which was where the first gold was found. Fossickers must have a NT Fossickers Permit. The ranger, himself a miner, is happy to offer assistance. Check out the Visitor Information Centre for further details.

* The explorer, David Lindsay, making his way from Port Darwin to the coast of South Australia, passed through in 1887 and noted that there appeared to be 'rubies' in the area.

* Later in 1887 miners arrived and found alluvial gold downstream from Paddy’s Rockhole and fossickers started arriving. Many of them had to walk the 600 km from Oodnadatta. The gold rush was short-lived and by the time the South Australian Government Geologist H. Y. L. Brown arrived in 1888 the town was nearly deserted.

* The township, which sprung up to service the miners, was the first significant European settlement in Central Australia.

* The fossicking gold miners found the weather conditions extreme and the rewards paltry and so the town was deserted but successful lobbying saw the South Australian government build a Government Battery and Cyanide Works in 1898.

* The battery kept operating until about 1916. It was never large and the desert conditions were harsh and unforgiving. By 1911 the population of Arltunga was only 56 and by 1933 it had dropped to 25. The problems of the town were a lack of water, extreme desert isolation and the difficulty of obtaining equipment and supplies.

* Remarkably, because of the intense dryness of the area, many remnants of the original town - old tin cans, bottles, and bits of houses - are still in evidence. It is a reminder of what gold fossickers would put up with when the prospect of gold was in a district

The Arltunga Visitors and Information Centre is open from 8.00am-5.00pm daily. It is the necessary starting point. It has cultural and historical displays as well as a DVD presentation which covers Arltunga's main attractions and places the ghost town into the larger Central Australian context. There is an 'Exploring Arltunga' brochure available at the Centre.

Parks and Wildlife Commission NT have an official site which is useful, particularly the downloaded fact sheet, check out http://www.parksandwildlife.nt.gov.au/parks/find/alice-springs-region/arltunga#.Ue8bcGSPfR0 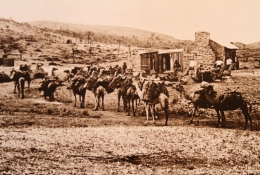 A camel train arrives in Arltunga in the 1890s. 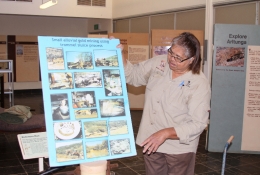 A Park Ranger explains the process of gold mining and production of ingots in the Arltunga Visitor Centre. 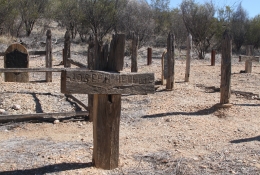 The grave of Joseph Hele at the White Range Cemetery near Arltunga. 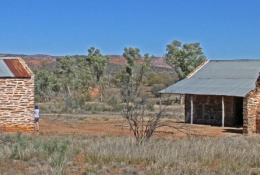 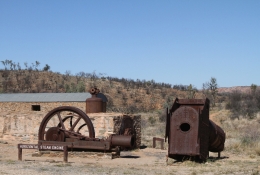 The remnants of the old Horizontal Steam Engine at Arltunga.