Although it was once a separate village, over the past two decades Armadale has become part of Perth southern suburban sprawl. It is a surprisingly rich suburb/town with the superb Minnawarra Historic Precinct, the pub in the Elizabethan Village and the shops in the Pioneer World all attracting day trippers. Minnawarra Park is an ideal place for a picnic.

Armadale-Kelmscott is located 36 km south of Perth via Cockburn Central. It is now part of the city's commuter belt.

No one is sure how Armadale got its name. Some sources argue that it is a misspelling of Armidale in NSW and other argue that it is named after Armadale, a small town west of Edinburgh, Scotland. There is little doubt that Kelmscott takes its name from the Oxfordshire village where Archdeacon T.H.Scott was born.

Minnawarra Precinct and 40 Jull Street
A sensible starting point for any exploration of Armadale is the Minnawarra Precinct which is in Minnawarra Park in Jull Street off Armadale Road which, in turn, is off the Albany Highway.
Apart from being a sublime place for a picnic (the lawns are positively manicured) the Precinct contains the History House Museum, the Bert Tyler Vintage Machinery Museum and the Armadale Outpost Telegraph Museum (both of which are just over the road at 40 Jull Street - the Visitor Information Centre) and the Minnawarra Chapel.
The History House Museum, which is open from Tuesday-Friday from 10.00 am - 4.00 pm and weekends from 1.00 pm - 4.00 pm contains an extensive collection of documents, objects and photographs recording the history of the district. "Each exhibition examines a different aspect of life in the district including farming, domestic life, local government, early settlement and Nyoongar traditional culture." For more details on the History House Museum check out https://www.armadale.wa.gov.au/history-house-museum. Nearby is the small, but pretty, Minnawarra Chapel - a Congregational Church built in 1903 and moved, literally brick-by-brick, to its present site in 1987. It is now hidden by trees but located beside the charming lake which is set in the precinct.
The Visitor Information Centre at 40 Jull Street (just over the road) contains the Bert Tyler Vintage Machinery Museum, a vernacular museum which includes such quintessentially Western Australian artefacts as a 6ft Baby Windmill and a Horwood Bagshaw Imperial Hay Baler, and the Armadale Outpost Telegraph Museum which has a collection of typewriters, telegraph and morse code equipment. Every Tuesday members of the Morsecodian Society of Western Australia demonstrate the equipment. For more information check out https://www.perthhillsarmadale.com.au/see-and-do.

Pioneer World
When it was first created Pioneer World was a carefully recreated replica of an 1880′s early settlers village. Located on the corner of the Albany and South Western Highways, in recent times the old buildings have remained but have been turned into restaurants, cafes, a day spa, a chapel, and, perhaps most incongruously, a Thai restaurant.
The Pioneer Village incorporates the Pioneer Village School which was established in 1981 as a non-denominational independent community school. The school and the surrounding buildings are Heritage Protected. It caters for kindergarten (3 yr olds) to Year 7.

Elizabethan Village
There was a time when the Elizabethan Village, a facsimile of Shakespeare's Birthplace, Anne Hathaway's Cottage and a number of other 16th-17th century Warwickshire buildings was one of Armadale's premier attractions. Located at 25 Canns Road (follow the signs) the complex was the "brainchild" of Leo Fowler, an Englishman born in 1923 who emigrated to Western Australia in 1974. Upon arrival he started to build an Elizabethan Village which was officially opened in 1977. It initially included a full size replica of Shakespeare's Birthplace, Anne Hathaway's cottage and the Cobwebs Restaurant. Subsequently it expanded to include the White Swan Hotel and Mary Arden's home. You can debate the sense of such a series of buildings forever. The problem will always be context. The potency of Anne Hathaway's cottage in Warwickshire is that it is easy to imagine a young Will walking across the meadows from Stratford to court Anne and sitting inside the huge fireplace chatting with the Hathaway family. Here you are just looking at a building totally out of place and context. Sadly Fowler's eccentric vision has been reduced to a development called Stratford Place, a large car park and a pub with boutique beers.

Centenary of Federation - Italian Settlers Memorial
This impressive life-size bronze sculpture, created by sculptor Andrew Kay, depicts an Italian immigrant couple (circa 1940s) and three children. It was created by the Southern Region Italo-Australian Community Foundation Inc which developed the memorial park and the sculpture near Sanctuary Lake. The memorial park and statue recognise the contributions of the Italian settlers to this region.  Plaques surrounding the memorial commemorate local immigrant families : - Mazzega Family, Moles Family, Leone & Mary Giglia Family, O'Shaughnessy Family, Nick & Pam Pagano. See "Comments" below for a detailed history of how the sculpture was funded and created.

Armadale Reptile and Wildlife Centre
Located 3 km south of the Armadale CBD at 308 South Western Highway, the Armadale Reptile and Wildlife Centre opened in 1995 and since then has acquired more than 200 reptiles (both venomous and non-venomous) and over 350 animals (kangaroos, dingoes, emus, parrots, bustards among others) mostly from situations where they had been rescued, injured or abandoned. For more detailed information check http://armadalereptilecentre.com.au.

Champion Lakes
Located north of Armadale, just off the Albany Highway, Champion Lake covers 55 ha and is known for its 2000 m international standard rowing course. It is available for public recreation and attracts people eager to go swimming, paddle a canoe, enjoy its white beaches or go bushwalking around the shoreline.

Aboriginal Interpretative Centre
Located on the corner of Lake Road and Henley Drive at Champion Lakes, this is a unique opportunity to make direct contact with the culture and heritage of the local Nyoongar people. It has Aboriginal art and walkways exploring Aboriginal medicine and bush tucker.

* Prior to European settlement the district was occupied by the Nyoongar people, members of the Wajuk Aboriginal language group.

* The site was explored by Ensign Robert Dale in 1829 and in 1830 the township of Kelmscott was gazetted and declared a military outpost which was manned by 17 members of the 63rd Regiment.

* In 1846 lead and copper were mined in the area by the Western Australian Mining Company at Cole's Shaft.

* By 1851 convict labour was building a road from Armadale to Perth.

* By 1853 the Narrogin Inn, the first building in the township of Armadale, had been constructed on the corner of the Albany and South West Highways. It was a simple wattle and daub hotel.

* By 1858 the district had its first Police Station.

* In the 1860s the area was a popular hiding place for Moondyne Joe, Western Australia's most famous bushranger.

* In 1866 Thomas Buckingham built the first sawmill in the area. Around this time pastoralists and timber workers were moving into the district and taking up land. Jarrah, red gum and sheoak were felled and transported to the coast to be used in such building projects as the Rockingham Jetty.

* The growth of the timber industry in the 1880s led to a rapid growth in the population.

* The railway line from Perth arrived in 1889 . Proximity to Perth meant that local farmers had a ready market for their produce.

* In 1893 the railway was opened from Perth to Bunbury. A number of shops were built near the railway station.

* By 1900 the district had its first primary school.

* In 1909 the township of Armadale was formally gazetted.

*  In 1976 History House Municipal Museum was officially opened by Sir Paul Hasluck. In 2003 it was taken over by the City of Armadale.

* In 1977 the remarkable Elizabethan Village was opened.

* The district was proclaimed the City of Armadale in 1985 with the slogan "City Living, Country Style". 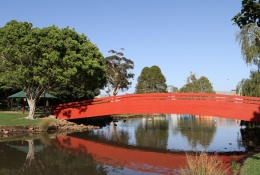 The striking bridge across the lake in Minnawarra Park. 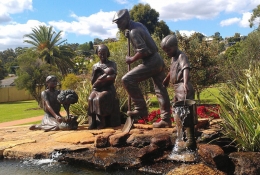 The Centenary of Federation Italian Settlers Memorial near Sanctuary Lake 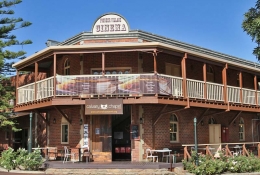 The old Pioneer Village Cinema has been turned into a cafe and the Calvary Chapel. 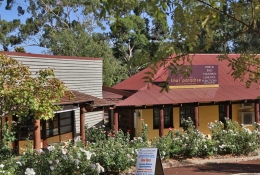 A 19th century cottage in the Pioneer Village is now a Thai restaurant. 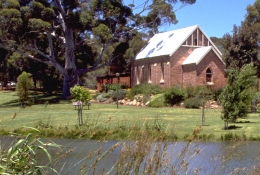 Minnawarra Chapel - a Congregational Church built in 1903 and moved, literally brick-by-brick, to its present site in 1987. (photo taken 1988) 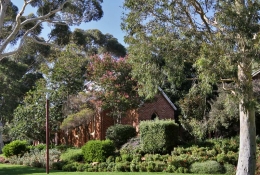 Since 1988 the trees and bushes have grown up and hidden the Minnawarra Chapel. 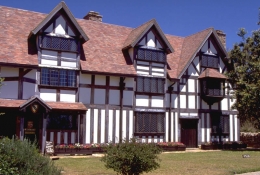