Arno Bay is a tiny tourist fishing village on Spencer Gulf between Port Neill and Cowell. The township sprawls from the huge grain silos near the Lincoln Highway, across the flat coastal lands to the small shopping centre, and then on to the Hotel Arno Bay and the Caravan Park which lie between the muddy, tidal Salt Creek and the town's jetty.

There are two ways to reach Arno Bay from Adelaide. If you want to take the fast route by catching the Sea SA ferry which crosses the Spencer Gulf from Wallaroo on the Yorke Peninsula to Lucky Bay near Cowell on the Eyre Peninsula then Arno Bay is 277 km from Adelaide. If, however, you want to drive via Port Augusta, it is 531 km via Highway 1 and the Lincoln Highway. It is 116 km north of Port Lincoln.

Who knows what the real origin of the name Arno Bay is? One plausible version says the town was named after the Arno River in Italy. The Geographical Names Board of South Australia argues that 'arno' is a local Aboriginal word which was applied to a place called Sandhill Well. A wonderfully apocryphal explanation is that Matthew Flinders, sailing up Spencer Gulf, heard his lookout cry  'Land Ahoy!' and seeing no land wittily replied, 'Ah! No bay there!'

Fishing and Relaxing
In recent times Arno Bay has become an ideal place for anglers with the waters of Spencer Gulf being rich in kingfish, garfish, salmon, mulloway, flathead, whiting and snapper. It is possible to catch most of these fish off the jetty but, if you want to head out into the Gulf, Arno Bay Fishing Adventures (http://www.arnobayfishingadventures.com.au/) proudly declare: "We target some of Australia’s biggest snapper as well as true ‘kidney slapper’, King George whiting and other species including mulloway and sharks."

Clean Seas Tuna Limited
Hagen Stehr, a fisherman who boasts that when he sits down with his tuna fishing friends in Port Lincoln there is $1 billion around the table, set up Clean Seas at Arno Bay in 1997. The site is specifically for breeding and propagating Southern Blue Fin Tuna, Yellowtail Kingfish and Mulloway with a view to selling them on world markets. It is now one of the most important industries in Arno Bay although it is not open to the public. There is a sign beside the main beach which tells the story of the company.

Navigation Light and Arno Bay Jetty
Built in 1882 the Arno Bay Jetty was used to supply the area with vital supplies and to ship out the wheat from the hinterland. The navigation light, which was refurbished in 2011, was used to assist the sailing ketches which entered the bay. It now stands at the end of the jetty.

Arno Bay Estuary Boardwalk
Located off Creek Road (follow the road south from the Arno Bay Hotel), the 1.4 km mangrove boardwalk is designed to showcase the beauty of the Arno Bay-Salt Creek estuary as it passes through dense mangroves, mudflats and samphire (a native succulent) with grass habitats over small tributaries alongside the main estuary waterway. The boardwalk has been extended to the coast line which provides safe swimming area, recreational fishing, picnic and BBQ facilities. It is a marvel of volunteer work assisted by government subsidies. Started in 1996 by the Arno Bay Estuary Group to broaden the range of tourist activities in the quiet town, it is a model of applications to government funds. In total they raised a staggering $222,233 and that, combined with an estimated 9,450 hours of volunteer labour, produced 350 metres of boardwalk, 350 metres of gravelled walking path, two shelters and two viewing areas. It is a triumph of a community spirit. In a town with a permanent population of 273 (2006 census) and under 500 (local website) they managed to commit to both raising the funds by endless applications and building the boardwalks by sheer hard labour. The boardwalk serves a double purpose. It is an excellent viewing platform for some of the most southerly mangroves in the country. [Arno Bay is on the same latitude as Wollongong). It is also an ideal location for anglers wanting to catch the flathead, mullet, salmon trout, Australian herring and yellowfin whiting in the creek. Not surprisingly a $66,000 grant came from the Recreational Fishing Community Grants Programme.

Redbanks
While the coastline is dominated by long, white, sandy beaches one anomaly is Redbanks (located 6 km north of the town), which is a unique collection of low lying sedimentary cliffs which have been designated a geological monument by the Geological Society of Australia. The reefs off the shore are known as a good surfing spot.

* Prior to the arrival of Europeans the area around Arno Bay was occupied by the Banggarla Aboriginal people.

* The first European settlers in the area arrived in 1863. They called the tiny settlement Salt Creek Cove because, in the early days of settlement, the coastal plain was covered with mallee scrub. The only access from the wheat farms to the coast was down the dry river beds.

* In 1880, in expectation of Arno Bay becoming an important port, a jetty was built.

* In 1882 the town was proclaimed and officially named Bligh, after Captain William Bligh. The township of Bligh was subdivided and 184 allotments were put up for sale however there was no great demand for land in such an isolated area.

* Arno Bay offers an interesting insight into the hardships and hopes which characterised the early development of the Eyre Peninsula. In the earliest days of settlement the tall clippers which sailed along the coast brought supplies and fertilisers to enrich the impoverished Peninsula soils. They took away with them grain and wool. Before the jetty was built the ships had to weigh anchor offshore while a sailor rowed to the shore and lit a signal fire. This fire could be seen for some distance and another fire was lit on Ranford Hill to advise the local farmers that a ship was off the coast.

* By 1912 the port was important enough for the elaborate and solid Hotel Arno to be built. It was built on the expectation that the combination of a railhead and a port would see the area grow rapidly.

* The locals resisted the name Bligh and continued to refer to the area around the jetty and Salt Creek as Arno Bay. In 1940 the town's name was officially changed from Bligh to Arno Bay. That year 11,000 tonnes of grain were exported from the port.

* In 1963 bulk grain silos were built. The ships were replaced by trucks which carried the local grain south to the major port facilities at Port Lincoln. Thus, today Arno Bay is a sleepy little village with minimal facilities.

There is a useful local website. Check out http://arnobay.com. There is a downloadable brochure on Cleve and Arno available at http://exploreeyrepeninsula.com.au/destinations/eastern-eyre/cleve. 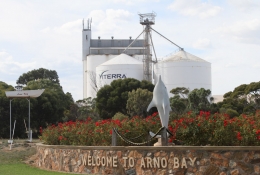 The "Welcome to Arno Bay" sign complete with dolphin and wheat silos. 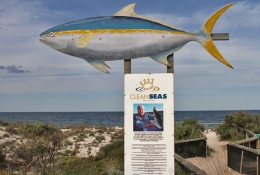 The Clean Seas company sign at the edge of the beach at Arno Bay. 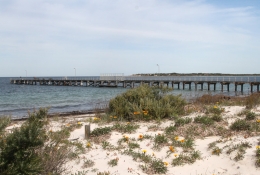 The Arno Bay jetty with wildflowers on the sand dunes. 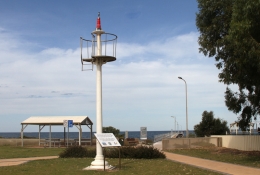 The Navigation Light (1882) at the end of the Arno Bay jetty. 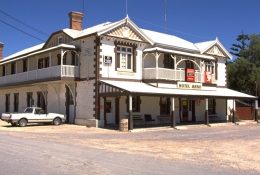 Hotel Arno (pic taken 1990). It has changed little over the years. 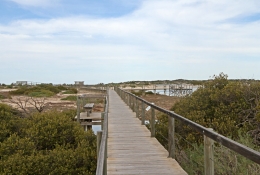