Australind is part of one of the fastest growing regions in Western Australia. Although now effectively a suburb of Bunbury, it is a significant historic town and a popular place for people seeking something quieter than the bustle of Perth and yet still wanting easy access to the city. A classic 'seachange' destination.

Australind is located 156 km south of Perth via State Route 2 and only 12 km north of Bunbury via the Old Coast Road.

The Western Australian Land Company purchased land in the area north of Bunbury in 1840 hoping to breed horses and sell them in India. In an eccentric attempt to ensure the success of the enterprise they decided to name the surveyed town site with a name manufactured from Australia and India - hence Australind.

St Nicholas Church
It is claimed that St Nicholas Church in Paris Road is the smallest church in Australia. Certainly it is the smallest in Western Australia. It is only 3.8 m wide and 6.7 m long and was originally built in 1848 as a workman's cottage. The timber used was jarrah. Services are still held in the church. Check http://www.stnicholasaustralind.org.au/index.htm for details.

Henton Cottage
Nearby is Henton Cottage (1841) which is now part of an historical complex recalling the early settlement of the region. It houses the Tourist Information for Australind.

Upton House
Located on the corner of Old Coast Road and Upton Place, Upton House, an elegant two storey dwelling which was built in 1847 for Marshall Walter Clifton, features french windows, a wide verandah and casement windows. The house was shipped out from England but by the time it was constructed most of the settlers had departed. IIt is now a private residence and not open for inspection.

The Leschenault Peninsula Nature Reserve
Located at the northern end of Australind, the Leschenault Peninsula is a rich destination for native flora and fauna. It is possible to see kangaroos at dusk; dolphins and flocks of birds (60 species have been sighted) including black swans. There are a number of excellent nature trails and tracks including the Australind Heritage Trail, Australind Jetty Walk, Herron Walk Trail, Wetland Wonders Trail, Belvidere Estuary Walk, John Boyle O'Reilly Wetland Trail and the Harris Track.

* Australind was the site of an unusual land scheme in the 1840s.In 1840-41, a little over a decade after the Swan River colony had been established, the newly formed Western Australian Land Company purchased land in the area and surveyed a town site. There was already a horse breeding station in the area and it was hoped that the horse trade would be the beginning of an important trade relationship between Australind and India.

* The first settlers arrived in 1841 and by 1842 over 440 immigrants had settled in the area. Marshall Walter Clifton was appointed Chief Commissioner. The plan was to divide a huge land grant of over 40 000 ha into small farming lots of 40 ha and establish an English-style village. The settlement was designed to ease poverty by providing low cost land and independence as well as providing Western Australia with much needed labour.

* By 1843 the settlement had been abandoned because of a range of problems including poor sandy soils, no water in summer and too much rain in winter. Clifton's wife has left a harsh account of the first winter in Australind with: 'rain falling in torrents all the evening; our tent in a sad state of wet; thunder and lightning soon came on; rain such as no one can imagine ... No future settlers can suffer what we do; for when others come they will find things made for them and our experience available.'

* The land settlement plan was officially abandoned in 1875.

http://www.harveytourism.com/Australind covers the history and attractions of the region. 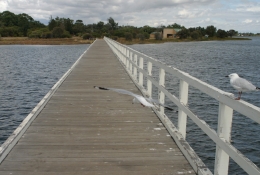 The jetty walk at the Leschenault Peninsula Nature Reserve 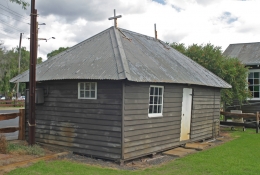 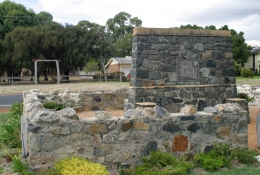 The memorial celebrating the vision that created Australind.