Avoca and Avoca Beach combined are a popular holiday resort and surfing destination at the southern end of the New South Wales Central Coast. The area, because it is quite difficult to access (it is not on any main road) has become popular with people eager to buy holiday homes away from the bustle of busier locations like Terrigal and The Entrance. Thus MacMasters Beach and Avoca Beach have become popular holiday retreats for the residents of Sydney's North Shore. The area is characterised by wooded hills, quietness and pleasant beaches.

Avoca Beach is located 90 km north of Sydney via the Pacific Highway, the Newcastle Freeway and the road through Gosford and Kincumber.

There are three Avocas in Australia - one in Tasmania, one in NSW and one in Victoria. Each town has its own unique origins but it is generally accepted that the meaning of Avoca (which is almost certainly a Gaelic word corrupted when it arrives in English) is  "the meeting of the waters". It was widely known at the time because of the song, The Meeting of the Waters, by Thomas Moore which was inspired by the Vale of Avoca in County Wicklow in Ireland. We know that Avoca and Avoca Beach were named by an Irish army officer, John Moore, who received a 640-acre grant and named it Avoca.

Avoca Beach
Avoca Beach is 2 km long with a headland at the north and a rock platform at the southern end. It is a popular surfing beach though the surf at the northern end being more challenging. The beach is popular with anglers and its length makes it good for beach walking and running.

Avoca Lake
Just behind the beach is Avoca Lake. It is part of the region's drowned coastline having been "drowned" when sea levels rose during interglacial periods. Historically it was a river valley fed from the surrounding countryside. Today it collects runoff from 11.4 square kilometres and the lake covers 97.5 hectares. It is divided into two sections which are separated by the Avoca Drive bridge. A narrow arm extends south of the bridge while, on the northern side it spreads to the west, the north and east to the beach. Bareena Island sits in the middle. North Avoca lies to the north and east of this northern section of the lake.

Cockrone Lagoon, Copacobana and MacMasters Beach
For decades MacMasters Beach has been a preferred destination for North Shore families wanting to get away from it all and enjoy a beach holiday without crowds, fast food, fairgrounds and boozy pubs. MacMasters Beach is so good that it literally makes no provision for the visitor – apart from a small shop in the MacMasters Beach Surf Life Saving Club which seems to be only open in the summer months.

MacMasters Beach has trees that edge the beach. It has a sense of pleasant leafiness. And it is far removed from the other beaches on the Central Coast. There's a delightful tidal rock pool which is located at the southern end of the beach and well protected by the cliffs that rise above it. There's a good children's park, over the road from the beach parking area, which has swings, two slippery dips and ideal facilities for a pleasant picnic. There is excellent walking around the edges of the rock platform or north along the beach to Cockrone Lagoon and Copacabana. There are attractive walks around the shoreline of Cockrone Lagoon (which is about 1 km north of MacMasters Beach), where black swans, herons, ducks, egrets and cormorants make bird watching worthwhile and the stands of paperbarks are particularly attractive. There are also a number of cafes and fast food outlets at Copacabana.

Captain Cook Lookout, Copacabana
Captain Cook Lookout, which offers outstanding views up the coast, can be accessed by heading up Del Monte Place until the visitor arrives at the steep headland known as First Point. A signposted side road leads to the car park for the Captain Cook Lookout which lies at the end of a short path. A cairn bears a plaque which explains that, when offshore in 1770, Cook, looking south along the coastline, found it distinguished by three prominent headlands which he named First Point, Second Point (Mourawaring Point at the southern end of MacMasters Beach) and Third Point (Bombi Point south of Little Beach). The three are readily identifiable from the lookout which is one of the best on the coast. The views to the south excellent and it is possible to look north and see the distinctive headland known as The Skillion at Terrigal.

Dive the Wreck of the HMS Adelaide
The official website explains: "The Ex-HMAS Adelaide is a former Australian naval warship that was purpose prepared and sunk to create an artificial dive reef. Located approximately 1.8km off Avoca Beach near Terrigal on the Central Coast of New South Wales, in 32 meters of water this site has been prepared and optimally located to make it attractive to divers of all levels of experience.

The ship measures 138.1 metres from bow to stern, with a beam of 14.3 metres and original displacement of 4100 tonnes. Diver access holes are strategically placed throughout the vessel to allow easy access to explore the key features of the wreck. Divers will recognise the captain’s chair, console and chart table from the bridge, the helicopter hangars, the operations room complete with the shells of weapons and sensor consoles, the crew’s cafeteria and a limited number of bunks and amenities.

Scuttled before an estimated 18,000 thousand strong crowd on April 13, 2011 the ex-HMAS Adelaide is already home to an establishing healthy marine community, where along with encrusting “first settlers”, the shipwreck is now home to a growing marine community which includes the giant eastern cuttlefish, eastern blue groper, kingfish, blennies, yellowtail, octopus, banner fish and bat fish to name a few."

* Prior to the arrival of Europeans the Central Coast of New South Wales was occupied by people from the Kuring-gai Aboriginal language group.

* When Captain James Cook passed the area (he did not land) in 1770 he named Cape Three Points and noted the presence of Aboriginal campfires.

* In 1830 640 acres (259 ha) were granted to an Irish army officer, John Moore, who became the first European to settle in the area. Moore built a house overlooking Avoca Lake where he grew fruit, grapes and cereals. In the 1850s he headed for the goldfields and while he was away the house burnt down.

* By the late 19th century Tom Davis had leased huge tracts in the Avoca district specifically to exploit the timber in the area. He built a tramway from his mill to Terrigal. Tramway Road follows part of the old route.

* As recently as the 1920s and 1930s Aboriginal groups would return to the area and set up camp beside the lagoon in the summer months.

* The area was settled and urbanised throughout the twentieth century. After World War II it became a popular destination for holidaymakers with many homes being built as weekenders mostly by people from Sydney's North Shore.

There is a good, comprehensive overview of Avoca and the surrounding area at http://www.avocabeach.com/Avocabooklet.pdf 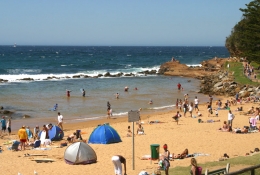 The rock pool at the southern end of Avoca Beach.

Looking north on Avoca Beach on a summer's day. 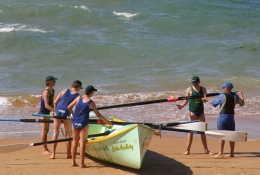 Surf lifesavers launching their boat at the southern end of the beach.