Pretty town on the on the banks of the South Esk River.

Tasmania has an excess of attractive, 19th century small towns with attractive sandstone Georgian and Victorian buildings. Avoca on the main road east from the Midland Highway to St Helens, St Marys and Bicheno is worth visiting because of its buildings and its peaceful setting beside the South Esk River.

Avoca is a small, historic town located 80 km south east of Launceston via the Midland Highway and 168 km north of Hobart via the National and Midland Highways.

There are three Avocas in Australia - one in Tasmania, one in NSW and one in Victoria. Each town has its own unique origins but it is generally accepted that the meaning of Avoca (which is almost certainly a Gaelic word corrupted when it arrives in English) is  "the meeting of the waters". It was widely known at the time because of the song, The Meeting of the Waters, by Thomas Moore which was inspired by the Vale of Avoca in County Wicklow in Ireland.

Historic Buildings
There is an A4 sheet (available at the Post Office) titled simply Avoca which provides a brief history of the town and advises the visitor that the town has eight buildings of historic significance. These include:

St Thomas' Anglican Church
St Thomas' Anglican Church, built in the Romanesque Revival style to a design attributed to James Blackburn (the architect who built the beautiful church at Port Arthur), was consecrated on 8 May 1842. The first baptism occurred on 1 October 1841. The church is on the hill at the top of Blenheim Street. Inside some of the pews still carry their original numbers and at the back of the church is a large pew which was purpose-built for a particularly large church warden.

Bona Vista
Located at 75 Storys Creek Road the beautiful stone residence, Bona Vista, was erected on land granted to Simeon Lord, a wealthy Sydney entrepreneur who had arrived in Sydney as a convict in 1791. Simeon Lord Jr. moved to Bona Vista in 1831 when he married Sarah Birch. At the time they lived in a bark hut. He began to build Bona Vista, with its basement cells and its sandstone terrace, in 1840 but didn't finish the structure until 1848. By 1848 Lord had 43 people living on his property eighteen of whom were convicts. At one time Tasmania's most famous bushranger, Martin Cash, worked as a groom on the property. The house was built around a courtyard and was surrounded by walls which were three metres high and nearly a metre thick. The reason: there was a perception of constant problems from both local Aborigines and bushrangers.  This wasn't entirely successful. In 1853 two bushrangers, Dalton and Kelly, held up the homestead and shot a local constable. They were eventually captured and hanged.

The property was used as a summer residence, with the family based at 'Vaucluse' in Macquarie Street, Hobart.  In 1862, the 11,374 acre property was put up for sale, and from 1873-1921 it was occupied by the Rigney family. Bona Vista is registered on the National Estate. It is not open to the public but can be seen from the road. See photograph.

Other buildings of interest include:

(a) Marlborough House (1845) in Blenheim Street (opposite St Thomas's) which was intended to be a hotel but it could not get a licence because it was too close to the church. It was subsequently used as a grammar school and coaching stop before becoming a private residence. It is not open to the public.

(b) Parish Hall (built around 1850) which was originally intended as a storehouse for the local hotel when, in 1937, it was purchased by Mr O'Connor and donated to the Anglican Church. It is currently used as the Post Office.

(c) Union Hotel (1842) in Falmouth Street which was operated by the Foster family for more than 60 years. It provided accommodation and had stables attached which were used by the coaching companies to change their horses.

* In 1825 John Helder Wedge surveyed the area and named it St Paul's Plains.

* By the 1830s there were convict probation stations at Avoca, Fingal, St Marys and Falmouth. This led to the settlement being named St Paul's Plains and a post office by that name being opened in 1832. During the 1830s the convict labour in the area resulted in roads and bridges being built.

* In 1844 an Irish entrepreneur named Roderic O'Connor bought up local land eventually acquiring 66,000 acres (the largest single landholding in Tasmania) upon which he built the stately home, Benham, which was destroyed by fire in 1926.

* The township was formally proclaimed in 1866.

* the railway arrived in 1886. It was built to carry coal from Fingal and tin from Aberfoyle.

* In the 1960s the town achieved a level of infamy when the local football club organised 'The Avoca Shoot' - an opportunity to shoot wallabies which were seen as a pest in the area. It was eventually stopped in the 1970s.

* There was a period when the area was known for its tin and coal mining but today Avoca is a service town for the surrounding farming community.

There is a detailed history on the local website - http://www.fingalvalleyhistory.com/Avoca.htm. The PDF Avoca: A Brief History can be downloaded at http://avocatasmania.com/assets/avoca-a-brief-history.pdf 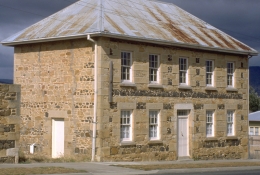 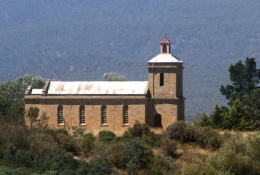 St Thomas Anglican Church (1842) on the hill above the town. 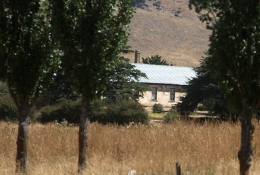 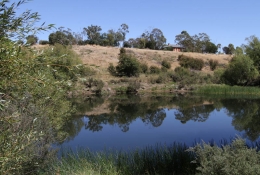 St Paul's River which runs into the South Esk River at the edge of town. 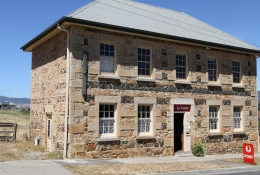