A Queensland sugar cane town on the Bruce Highway.

Ayr is a substantial rural service centre north of the Burdekin River at the heart of one of the most productive sugarcane-growing areas in Australia. Like many country towns it has a few interesting buildings but, because of the stronger appeal of Townsville (only 88 km to the north) it has little to stop the traveller. The bridge to the south of Ayr on the Bruce Highway, known as the 'Silver Link', is over a kilometre long and since its construction in 1958 has ensured that the town has not been cut off by the floods which occur on the Burdekin River most wet seasons although this claim was debunked in 2019 when nature managed to deliver so much rain to the area that Ayr was cut off both from Home Hill and Townsville.

Ayr was named after the Scottish town on the Firth of Clyde south of Glasgow which was the birthplace of Thomas McIlwraith who was premier of Queensland three times between 1879 and 1893. The town was named in McIlwraith's honour.

2. Anzac Memorial Park
This charming and cool park was the first officially gazetted in the town. It has memorial gates (built from clay in 1926) for those who fought and died in World War I and a pleasant space which is ideal for picnics.

3. Masonic Temple
This impressive brick building was built around 1936 and dominates the streetscape with its high ceiings and its impressive columns.

12. National Bank
The impressive and rather ostentatious National Bank was opened in 1935. It is characterised by its large Doric columns which are out of proportion to the rest of the building. It is no longer a bank.

14. Delta Cinemas
The Delta Cinemas, reputedly the first country picture theatre in Queensland, was opened in 1909. It closed in 1961 but was redeveloped and reopened in 2000. It is owned by international golfing champion Karrie Webb who is a local. Her parents run it.

15. Clock Tower
Queen Street is dominated by a clock tower which was unveiled in 1930 in honour of John Drysdale, an important local citizen who helped to provide the town and surrounding area with a reliable fresh water supply (it was vital for sugar cane production) and was a pioneer of the local sugar industry.

18. Living Lagoon Sculptures
Located in Queen Street in the forecourt of the Burdekin Theatre Complex these bronze and granite sculptures were created in 1985 by Stephen Walker. The sculpture pays tribute to native flora and fauna, while recognising the importance of water to the Burdekin community.

19. Ayr Court House
Located in Queen Street near the Burdekin Theatre Complex, the Ayr Court House was completed in 1935 at a cost of £2000. Look carefully and you will note that the red brick building has an arched entrance marked with a decorative parapet.

Ayr Cemetery and its Mausoleums
Located off the Bruce Highway to the north of Ayr, the Ayr Cemetery is interesting because of the impressive collection of mausoleums where families (mostly Italian and dating from the time when Italians arrived in the area as sugar cane cutters) have been buried in building that are substantial and impressive.

Plantation Park
Located at the southern end of town, Plantation Park is the pleasant place to stop for a picnic or break from the long drive north. It is particularly notable for the Gubulla Munda 60-metre Giant Carpet Snake. It is the totem of the local Jura people.

Home Hill
Located on the southern side of the Burdekin River, 12 km from Ayr, is the small town of Home Hill which is notable for its large and rather gracious "Comfort Stop" which was opened in 2005 and is designed to persuade travellers to take a short stop in the town. The building has toilets, hot showers, barbecue facilities and a parent's room.
The small town is really little more than some interesting historic buildings along the Bruce Highway.
It is possible to obtain a Heritage Town Walk - Home Hill from the Visitor Centre (behind the Comfort Stop) which lists 12 places of interest - all are on the Bruce Highway.
Of particular interest are the:

Home Hill Post Office (1924)
A classic Queensland timber construction it looks as though it has been raised to keep it cool in the summer months. In reality it was raised after the 1947 floods. It has not been flooded since.

Canecutter mural
Located on the Bruce Highway at the northern end of town, this is a tribute to the men who made their living in the canefields. The mural was painted by Ayr artist Margaret Redweik.

* Prior to the arrival of Europeans the area was home to Aborigines from the Bindal language group.

* The Burdekin was first explored in the 1840s.

* by the 1860s Europeans had moved into the upper reaches of the valley.

* A township, Wickham, was established in 1864. It was destroyed by floods on the Burdekin River a few years later.

* The coast, being marshy and difficult, was ignored and it wasn't until the 1870s that R. W. Graham of Lilliesmere and A. C. Macmillan of Airdmillan settled on the lower Burdekin and started growing sugarcane.

* In 1879 they decided to pool their resources to form the Burdekin Delta Sugar Company and this was sufficient for a small settlement to be formed on the northern side of the river.

* In 1884 Kalamia Mill and the Pioneer Mill were opened in the area.

* The Ayr local government division was formed in 1888.

* The 1890s saw the consecration of both the Church of England and Catholic church.

* A private tramway was built in 1901 between Ayr and Townsville.

* In 1914 the town received electricity from the Delta Theatre's generator.

* The Council headquarters were built in 1922.

* In 1928 the John Drysdale Memorial Clock was opened in the main street.

* By 1930 a bridge had been built to connect the town with Home Hill. The town clock was officially unveiled.

* In 1988 the town established its own Mango Growers Association.

* In 2019 the Burdekin flooded and cut the town off from both Home Hill and Townsville.

* Today Ayr lies at the heart of one of the most productive sugarcane-growing areas in Australia.

There are useful downloadable brochures on the http://www.burdekin.qld.gov.au. 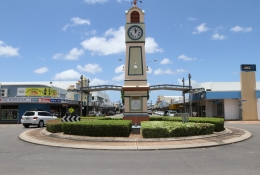 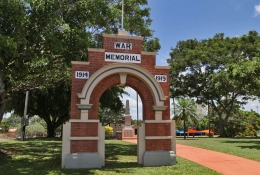 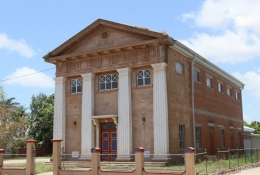 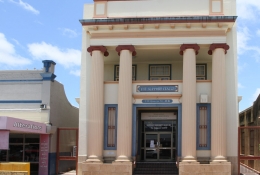 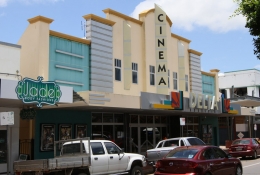 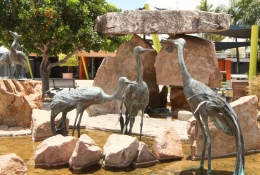 The Living Lagoon Sculpture outside the Burdekin Theatre. 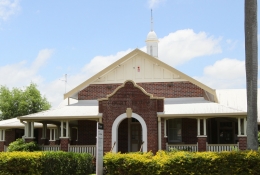 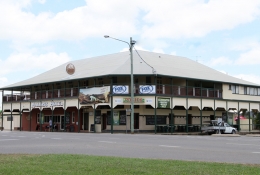 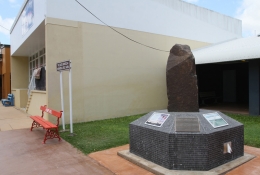 The Memorial Rest Area and Centenary Rock in Home Hill. 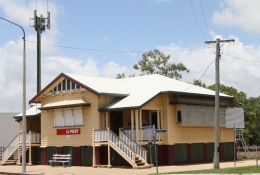