North Queensland service town in the shadow of the state's two highest mountains.

Babinda is set off the Bruce Highway and, at first glance, looks like just another North Queensland rural service centre surrounded by cane fields.  The town lies in the shadow of Queensland’s two highest mountains; Mt Bartle Frere (1622m) and Mt Bellenden Kerr (1593m), which form part of the World Heritage listed Wooroonooran National Park. The appeal of the town lies in the attractions in the rainforest on the edge of the mountains: the beautiful, if dangerous, "The Boulders", on Babinda Creek and the Josephine Falls. The town has a timeless sense and is characterised by a number of interesting Art Deco buildings. Nearby are both Bramston Beach (a quiet retreat from the bustle around Cairns) and the impressive Eubenangee Swamp National Park - home to over 190 species of birds. Don't forget: Babinda is known as  ‘Australia’s Wettest town’ with an average annual rainfall of around 4,500 mm (that’s 177 inches). In 1999 it recorded a record breaking 6967.7 mm (that’s 274 inches).

Babinda is 1647 km north of Brisbane and 59 km south of Cairns via the Bruce Highway.

Babinda comes from the Wanyurr Yidinji words, 'bunna binda' meaning 'water passing over your shoulder', a description of water rolling over the boulders in the Babinda Creek.

Babinda State Hotel
The historic Babinda State Hotel is located in the main street at 73 Munro Street. It has been modernised and proudly wears its unique heritage as the only hotel in Queensland (and probably in Australia) which was built by the State Government.
When it was completed in 1917 the government tried to justify its construction on the grounds of encouraging controlled drinking and stamping out sly grog shops. They also claimed that the hotel would offer reasonably priced lodgings for the hundreds of itinerant workers who came to Babinda during the cane-cutting season.
The hotel was opened on 29 May 1917 by the Queensland Home Secretary Mr. Huxham who, after delivering an opening address which attacked the sly grog industry, invited his audience into the pub for a free drink. The pub was sold back to private ownership in 1929. Check out http://www.babindastatehotel.com.au for more details.

Native Creations Gallery
This 100% Aboriginal owned and operated gallery is located at 20 Moretto Street. It sells boomerangs, didgeridus, paintings, gifts and T-shirts. It is owned and run by Estelle Tranby (a traditional artist who has been painting for over 25 years) and Garth Murgha who specialises in instruments and tool. The gallery is open from 8.30 am - 5.00 pm Monday to Friday. For more information check out http://www.nativecreations.com.au or tel: (07) 4067 2113.

The Boulders
Located 6 km to the west of town, on a clearly marked road, is a large Car Park, a safe swimming hole and a pleasant walk to lookouts over The Boulders.
The Boulders are a series of large granite boulders in the Babinda Creek which have been worn smooth by tropical rains. They are a dramatic and dramatically beautiful sight, but one which is given much greater significance by the Aboriginal legend and the strange connection it seems to have with modern tragedies on this particularly dangerous and deadly stretch of water. Over 17 people (mostly young men) have drowned at The Boulders since the 1960s. They seem to have been held under by powerful currents.
At the beginning of the path to 'The Boulders' is a simple monument which reads 'Pray for the soul of Patrick McGann he came for a visit and stayed forever'. There is also a very pragmatic sign on the Devil's Pool Walk which states bluntly "This creek has claimed many lives. Wet rocks are extremely slippery. Beware of rapidly rising water levels. Do not swim in the main creek downstream of this point."
Devil's Pool Walk
The easy, 2 km walking path, with stairs and boardwalks, passes through tropical rainforest and eventually reaches three lookout vantage points over the rocks. It is a magical walk. Above you can hear chattering of birds, the tropical tree roots have been twisted into fantastic shapes, and the canopy offers a cool covering from the tropical sun.
The Legend of Oolana and Dyga
According to legend a very beautiful girl from the Yidinji people named Oolana married an old and respected elder from her tribe named Waroonoo. Some time after their marriage another tribe arrived in the area. In this group was a handsome young man named Dyga. The moment Oolana and Dyga saw each other they fell in love. Realising the crime they were committing, the young lovers fled into the valleys, pursued by both tribes. When they were finally captured, Oolana broke free from her captors and threw herself into the still waters of the nearby creek, calling for Dyga to follow her. As she hit the waters, her cries for her lost lover turned to rushing water and the land shook with sorrow. Huge boulders were thrown up and the crying Oolana disappeared amongst them. It is said that her spirit still guards the boulders and that her cries can be heard, calling for her lost lover, and luring young men into the dangerous waters.
A free camping ground is located nearby with toilets, cold showers, BBQs and picnic facilities. The average annual rainfall in the area is 4614mm. For more information, check out http://www.babindainfocentre.com.au/what-to-see/attractions/babinda-boulders.

The Story and Memorial to USAAF B-25 Mitchell Bomber
"At 6.50pm on 21 April 1942, USAAF B-25 Mitchell Bomber was returning to base at Charters Towers from Port Moresby after completing a reconnaissance mission over the Coral Sea. As it approached Cairns it encountered heavy rain and cloud and crashed just below the peak of Mount Bartle Frere tragically killing the seven crew men." Thus reads the memorial in the park at The Boulders. There is excellent, detailed signage beside the memorial which tells the story of the Japanese trying to take Port Moresby and the US air force, flying out of North Queensland, and helping Australian soldiers on the ground to repel the Japanese advance.

Josephine Falls
Located 16 km south-west of Babinda, via the Bartle Frere turnoff from the Bruce Highway, are the Josephine Falls which are often cited as the most beautiful falls in North Queensland. This evaluation has been matched by their regular use as the setting for both print and TV advertisements. There is a 700 metre walk (it is easy - some stairs and boardwalks) from the car park to the falls and the swimming hole. The water is cold and the falls are susceptible to flash flooding. There are three lookouts along the way.
The Josephine Falls are part of the Wooroonoonan National Park which, in turn, lies within the vast 900,000 ha Wet Tropics World Heritage Area which stretches from Cooktown to Townsville. The specific Wooroonoonan National Park runs from Gordonvale south to the Misty Mountains.
The Department of National Parks website notes of the Josephine Falls that the "walking track winds through rainforest known as complex mesophyll vine forest, the most complex rainforest type in Australia. An interesting feature of this area is the presence of a number of plants that generally occur only at higher, cooler altitudes. Josephine Creek starts high in the mountains and it carries surprisingly cold water down to the lowlands. This water cools the creek's immediate surroundings and, combined with the cold mountain air channelled down the valley, creates a cooler microclimate along the margins of the creek. This has encouraged certain plants, which are normally more at home at higher, cooler altitudes, to flourish. These include the Atherton palm, an elegant understorey species that normally grows above 500 m altitude, and the moisture-loving potato fern, with arching 3 m long fronds. Hope’s cycad Lepidozamia hopei—an endemic cycad of the Wet Tropics and possibly the world's tallest cycad— is also found here. Plants can grow to 20 m tall and the cones can be up to 70 cm long. They produce bright red, toxic seeds which may take up to 12 months to germinate." For more information check out https://www.npsr.qld.gov.au/parks/wooroonooran-josephine-falls/about.html.

Golden Hole
Golden Hole, also known as Biggs Recreation Reserve, is located 17 km south of Babinda. It is on the Russell River only 1.5 km from the Josephine Falls turnoff.  Located at the foot of Mount Bartle Frere, it has superb views of the mountain. It is a recreation area beside a genuinely exquisite section of the Russell River and is known for the good fishing in the river and the opportunities to swim and canoe although it is important to note that this is an area inhabited by saltwater crocodiles.

Eubenangee Swamp National Park
Located 20 km south-east of Babinda - take the turnoff to Bramston Beach 6.7 km south of Babinda and follow the signs at Cartwright Road - is the Eubenangee Swamp National Park. A 1.5 km return (30 minutes) swamp walk, with some sections of boardwalk, allows visitors to experience the variety of flora and fauna which can be found in the park. There are over 190 bird species including black necked storks and spoonbills which make the park ideal for twitchers. The walk extends to a grassy hill lookout with excellent views over the Nationaal Park. There is an excellent downloadable brochure at https://www.npsr.qld.gov.au/parks/pdf/tropical-coast-jg.pdf and detailed information and maps at https://www.npsr.qld.gov.au/parks/eubenangee-swamp.

Bramston Beach
Located 22 km east of Babinda is the peaceful, unspoilt tropical Bramston Beach. This tiny settlement - just one cafe and one general store - is ideal for people wanting to just walk along a beautiful tropical beach.

* Prior to the arrival of Europeans, the area was home to the Wanyurr Yidinji Aboriginal people probably for at least 50,000 years.

* In 1886 Christie Palmerston explored the area.

* By the 1890s the area was known for its sugar and coffee plantations.

* In 1910 the Cairns-Mulgrave railway line was extended to Babinda.

* In 1915 a government sugar mill began operating in the district.

* In 1917 the state-run Babinda Hotel was opened for business.

* In 1918 a serious cyclone caused extensive damage to the town.

* In 1921 the Bellenden Ker Range including Mount Bartle Frere became a national park.

* In 1924 the local railway was extended to Innisfail. That same year local farmers took over the running of the local sugar mill.

* Freehold titles in the town began as late as 1929. Prior to that most of the town was owned by the government.

* In the 1980s the sugar mill was sold to Bundaberg Sugar.

* In 1988 Bellenden Ker was made a World Heritage site.

* In 2003 the sugar crop in the area was huge as a result of particularly heavy rainfall.

* In 2006 Cyclone Larry destroyed much of the town and the surrounding district.

* By 2013 the sugar mill had closed and was demolished.

There is a useful local website with information about accommodation and eating. Check out http://www.babindainfocentre.com.au. 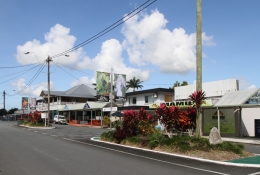 The main street of Babinda. 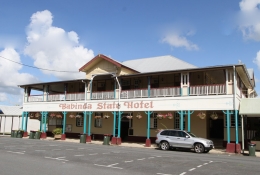 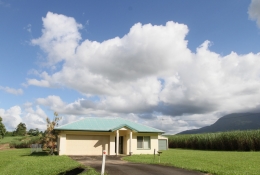 Sugar cane fields grow up to the edge of domestic lawns - below a cloud-covered Mount Bartle Frere. 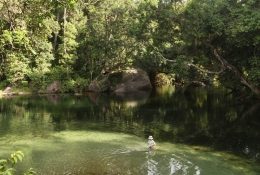 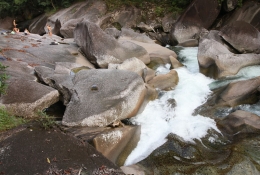 People ignoring the danger signs at The Boulders. 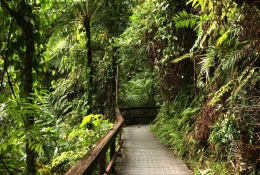 The boardwalk on Devil's Pool Walk - one of the best rainforest walks in the district. 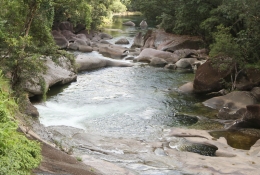 Oolana's Pool, or Devil's Pool, at the bottom of The Boulders.