Bairnsdale is an important rural service centre in East Gippsland. It offers access to the Gippsland Lakes in the south; the mountains, streams, caves, snowfields and national parks to the north; the pastoral plains of the west, and the picturesque coastline of the south-east. Today Bairnsdale is a centre for grazing, wool, dairying, timber and fishing.

Bairnsdale is located 281 km east of Melbourne via the M1 (Princes Highway). It is 14 metres above sea level.

The first settler in the district was Archibald MacLeod who called his property Bernisdale after the tiny settlement on the Isle of Skye where he had been born. There is a story that MacLeod changed the name because a lot of children, known to the Scottish as bairns, had been born in the district. There is no evidence that this is correct. A more likely explanation is that Bairnsdale is easier to say that Bernisdale.

Central Gardens
Many towns can claim to have impressive median strips but Bairnsdale not only has a very wide garden for a median strip but it continues for 4 km down the Princes Highway from the Mitchell River bridge and, at various points, includes the town's water tower, cenotaph and band rotunda.

The Water Tower
Built in 1926-1927 the water tower stands 30 metres high and once had a capacity of 360 kilolitres. It was designed by civil engineer Svend Haunstrup and operated until the 1980s.

Bairnsdale Cenotaph
The Bairnsdale Cenotaph commemorates those who have served in conflicts in which Australia has been involved. The Cenotaph was unveiled by the Governor General Lord Forster on the 10th October 1922. Plaques have been added for later wars.
The Gippsland Times of 12 October, 1922 recorded that: "Lord Forster, the Governor-General, and Lady Forster, visited Bairnsdale on Tuesday afternoon to unveil two war memorials. The first ceremony was at the cenotaph in Main-street, erected to the memory of the fallen men of the shire. There was a large attendance of township people and country residents. Mr. A. Lloyd, hon. secretary of the memorial committee, in handing over the cenotaph to the care and custody of the Shire Council, said when laying the foundation stone a casket had been placed in a recess. It contained two parchments, one having the names of the men of the shire who had seen service in the war, numbering 900; and the other the names of the fallen 171, including one nurse. The cenotaph cost over £700, and is a simple but chaste memorial."

The Court House and Shire Offices
The remarkably ornate and elegant Court House in Nicholson Street was opened in 1894. It  is recognised as one of Victoria's finest examples of late 19th century architecture and is considered of some significance to the development of an Australian style. Its geometric exterior combines gables, towers and mullioned chimneys in an intricate and unusual way and is dominated by a large cylindrical tower with a conical roof. The facade of the entrance contrasts plain brick with an arch of elaborately sculpted stonework featuring Australian flora and fauna. The main chamber retains the original cedar bench and some exceptional carved cedar panelling.

St Mary's Roman Catholic Church
Built in 1913, St Mary's Roman Catholic Church looks more like an Italian church than an Australian one. An Italian painter named Francesco Floriani, who worked in the area during the Depression, was commissioned to paint the interior of the church. The result is an impressive collection of murals, stations of the cross, and a ceiling which features hundreds of figures in images of heaven and hell. The building was constructed in two sections. The sanctuary was begun in 1913 with the church opening the following year. The tower was completed in 1937.

East Gippsland Historical Society Museum
The East Gippsland Historical Society Museum at 40 Macarthur Street has specialist collections of office equipment from public offices, photographs, cameras and projectors, lamps and lighting, musical instruments, war memorabilia, medical and dental equipment, clothing and fashions, telephones and radios, saddlery and coaches, and early settler tools. The website adds to this list "In the surrounding grounds of the museum you will find farm machinery, tools, and various buildings, including Calegero log hut, a pioneer building, which was build in circa 1880 by John Caughey on his selection near Iguana Creek on the Dargo Road at Glenaladale. The hut has been moved from it's former location to the museum site and was reconstructed and restored in 1989 by his descendants and their friends as a Bicentennial project." The two-storey building which houses the museum was designed as a Presbyterian Church and, in 1891, functioned as one of the first local secondary schools - Bairnsdale College - later becoming St Andrews College. It is open Wednesdays, Saturdays and Sundays from 1.00 p.m. to 4.00 p.m., tel: (03) 5152 6363. Check out http://www.eastgippslandhistoricalsociety.com for more details.

Howitt Park Adventure Playground
With pleasant views across the Mitchell River, the Howitt Park Adventure Playground is located off the Princes Highway at the northern end of Bairnsdale.  The park was named after anthropologist and politician, Alfred William Howitt, an early settler of Lucknow who headed the party that located the remains of the Bourke and Wills expedition. It contains impressive eucalypts which were once used by local Aborigines for the construction of their canoes and it is speculated that the reserve is the burial spot of Bruthen-Munjie, a local tribal elder. A cairn in the park honours the memory of Gippsland explorer, Angus McMillan, a controversial figure who had a reputation for treating the local Aborigines with particular viciousness. The Adventure Playground has picnic and adventure facilities including barbecues, swings, sand pits, slides, see-saws and bridges.

McLeod Morass State Game Reserve
Located south of the town, and accessed off Bosworth Road, is McLeod Morass State Game Reserve, a 520 ha park situated in wetlands, rich in animal life and featuring a boardwalk, bird hide and an excellent walking track. There is a Park Note complete with a detailed map which can be downloaded at http://parkweb.vic.gov.au/explore/parks/macleod-morass-w.r. It lists some of the birds to be seen as well as providing useful information on the reeds, rushes, floating plants, trees and shrubs.

Bataluk Cultural Trail
The Bataluk Cultural Trail runs from Sale in the east, through Stratford, Mitchell River National Park, Bairnsdale, Metung, LakeTyers, Buchan and Orbost to Cape Conran in the west. It follows the trails and trading routes of the Gunaikurnai people and focuses on elements of their history and culture, including Dreamtime stories, traditional lifestyles, the Den of Nargun, Legend Rock, Aboriginal Keeping Places, archaeological sites such as canoe trees and shell middens (some dating back 10,000 years), cultural centres of the region, and aspects of European invasion, colonial settlement and present-day existence. At Bairnsdale the focus is on Howitt Park, Krowathunkooloong Keeping Place and Mitchell River National Park.

Krowathunkooloong Keeping Place
The Krowathunkooloong Keeping Place focuses on the cultural heritage of the Gunaikurnai Aboriginal people of the local area. "Visitors to the Keeping Place can learn, understand and appreciate the history of the Gunaikurnai people through guided or self-guided tours of the museum. The display includes traditional hunting and fighting weapons, bark canoes, baskets, fishing spears, boomerangs and an exhibition of contemporary Gunaikurnai art. There are staff members on hand to answer questions." For more details check out http://www.batalukculturaltrail.com.au/krowathunkooloong.php. There are guided tours and talks, displays, art and craft exhibitions, and cultural activities for groups. It is open from 9.00 am - 5.00 pm Monday to Friday and is located at 37-53 Dalmahoy Street, tel: (03) 5152 1891.

Mitchell River National Park
The scenic, 14,250 ha Mitchell River National Park is located 44 km north west of Bairnsdale via Lindenow, Walpa and Glenaladale. The park's flora includes stands of kurrajong, yellow wood, kanooka, orchids and pittosporum. It is possible to see satin bowerbirds. As the National Parks website notes: "Mitchell River National Park has impressive river scenery, serene rainforest gullies, rugged landscapes and some of Victoria’s more unusual vegetation communities. From open forest to remote river gorges, the park is home to a vast array of indigenous flora and fauna, some at the furthermost extent of their range." Check out http://parkweb.vic.gov.au/explore/parks/mitchell-river-national-park for more information.

Den of Nargun
One of the rainforest gullies in the Mitchell River National Park contains the Den of Nargun, the home of a mythical Aboriginal female creature said to have consumed young people who strayed too near the entrance of her cave. She lives in a cave behind the waterfall. The Den is in fact a cavern of huge stalagmite and stalactite formations often fronted by a curtain of mist which overhangs the entrance due to the water which falls from the ledge above. It is situated in the bed of Dead Cock Creek, within a pink sandstone gorge first noted by Alfred William Howlitt who was accompanied into the area by Aboriginal guides, Bungil Bottle and Master Turnmite. There is a 5 km, 90 minute loop walk to the Den of Nargun from the Den of Nargun Car Park on Wallers Road. The actual sites are shorter distances with the Den of Nargun being 15 minutes; Bluff Lookout being 10 minutes; and the Mitchell River being 20 minutes. For more detailed information check out http://parkweb.vic.gov.au/explore/parks/mitchell-river-national-park/things-to-do/den-of-nargun.

East Gippsland Rail Trail
This rail trail has been constructed on the former railway line between Bairnsdale and Orbost. It starts at Howitt Park in East Bairnsdale and is a total of 97 km in length. The first section - Bairnsdale to Nicholson - is 9 km long and is sealed all the way. The highlights are Bosses Swamp, a bird habitat near Nicholson, and an historic bridge over the Nicholson River. The trail at this point passes mainly through flat and undulating grazing farmland. Check out http://www.eastgippslandrailtrail.com.au/ for more details and a map.

* Prior to the arrival of Europeans the area was inhabited by the Gurnaikurnai Aborigines.

* The first European explorer into the area was Angus McMillan who reached the area in 1840. McMillan named the Mitchell River.

* In 1842 Frederick Jones became the first European settler. He settled at Lucknow and bred horses for the British market in India.

* Archibald MacLeod was the first settler to take up land in the area now covered by the present town. He called his run "Bernisdale" after his birthplace on the Isle of Skye.

* In the 1850s and 1860s the town grew as a result of its location on the river and its access to the sea. It became a supply port for the East Gippsland goldfields. Goods were shipped into Lake King, up the Mitchell River to Bairnsdale then hauled overland. Ships were loaded with cattle products and wool from the surrounding area for the return trip to Melbourne.

* A police station was established in 1862

* The hops cultivated in the Mitchell Valley between 1868 and 1916 were transported to Bairnsdale for shipment to the hop kilns.

* Bairnsdale was proclaimed a shire in 1868. That same year a courthouse, school and post office were built.

* Barges conveyed wattle bark down the river to Jackson's tannery which commenced operations in 1876.

* In 1877 a factory producing mining tools was opened.

* The main street remained unsealed until 1883.

* Attempts were also made to develop an oil seed industry between 1890 and 1910.

* In 1920 the town experienced a riot as a result of a visit by the evangelist and teetotaller, Tennyson Smith.

* In 1942 Bairnsdale won a national competition for providing the government with the largest war loan of any town its size.

There is a useful site - http://www.visitmelbourne.com/Regions/Gippsland/Destinations/Bairnsdale.aspx. 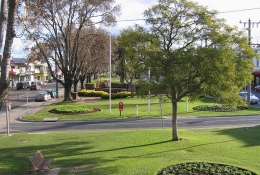 View of the main street from the Band Rotunda 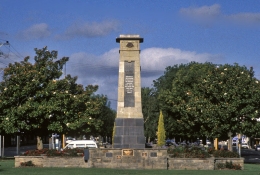 The Bairnsdale War Memorial - unveiled in 1922. 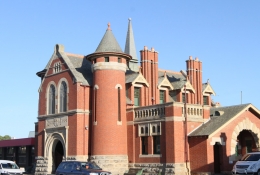 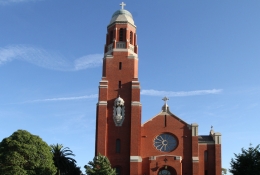 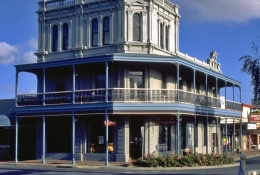 Now the offices of the Bendigo Bank - on the corner of Nicholson Street and Bailey Street. 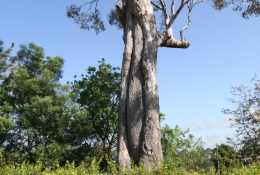 The canoe tree in Howitt Park on the Mitchell River. 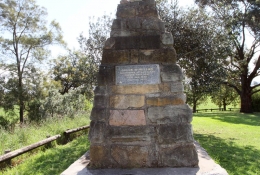 The monument to Angus McMillan in Howitt Park on the Mitchell River.