Balaklava is an attractive rural service town defined by its impressive wheat silos and grain loading facilities.  It is characterised by rows of pine trees and a number of interesting buildings. In summer, when the rainfall drops to nearly zero and the temperature rises, the town is surrounded the dry marginal landscape of the Mid North.  It experiences 391 mm rainfall per year. It is characterised by a large number of old style sandstone houses and the distinctive curio of an elaborate 'Keep Left' sign in the centre of town.

Balaklava is located 93 km north of Adelaide and 122 km via Port Wakefield which lies 26 km to the west.

The Battle of Balaclava, and the famous Charge of the Light Brigade occurred in 1854. Sixteen years later, in 1870, the Adelaide grain merchant, Charles Fisher, established the town and decided to name it after the famous site of the battle during the Crimean War.

Balaklava Centenary Hall Folk Museum
The Centenary Hall has been used as a folk museum since 1977. It contains household items and a range of local memorabilia including photographs and memorabilia. It is located in May Terrace and signposted off Wallace Street. There is a second museum site in Urlwin Park in Short Street. It was opened in 1986 and includes farming equipment, horse drawn vehicles, a replica of Ted Anders blacksmith shop and a section of the historic "Corduroy Road" which was used by bullockies travelling between Burra and the coast. The museum is open between 2.30 pm and 4.30 pm on the second and fourth Sunday of the month. For more details check http://balaklavamuseum.rbe.net.au.

Lions Walking Trail
There is a pleasant walk along the banks of the Wakefield River from Elizabeth Street to the Moody Estate. It is an opportunity to experience the flora and fauna of the area including impressive stands of gum trees.

Shamus Liptrot Cycling Trail
This cycle trail, dedicated to Shamus Liptrot who died as a result of a cycle accident, runs from Balaklava to Halbury.

Devil's Gardens
Located 7 km north east of Balaklava, the Devil's Gardens Reserve is a picnic destination, noted for its fine stands of river box gum trees, which was once a dangerous part of the route from the Burra copper fields to Port Wakefield. A sign at the site, dating from 1986 when it celebrated 150 years of the Gulf Road Traffic, records: "From 1849 to 1857 a large number of bullock and mule teams travelled the Gulf Road between Burra and Port Wakefield, carting copper ore from the Burra Copper Works to the Port, returning with coal and other requirements. This spot was known as the Devil's Garden, a treacherous bog in winter, surrounded by sandhills which were difficult to cross in summer. A corduroy road of native pine poles cut from the scrub was laid over the area, and the remains of the this road are buried beneath the sand nearby." There is some evidence that the Devil's Garden is haunted. A ghost would appear and stand at the top of a nearby sandy hill. It scared both the bullocks and the men who camped by the "gardens". There is detailed information at https://www.wakefieldrc.sa.gov.au/page.aspx?u=898&print=1.

A Note About the Bullock Teams and the Teamsters
Bullock teams took copper from Burra to Port Wakefield from 1849-1870 when the arrival of the railway changed everything. The bullockies were larger than life with one traveler, William Cawthorne, noting in 1851, that when they arrived in a village they became “... a drunken mob of bullock drivers, playing cards, drinking, swearing, fighting.  So little are they trusted, that the landlord or landlady hold the nobbler in one hand while they take money with the other! ... So much is the publican in the hands of these ruffians that they insist upon his rising at any hour of the night and satisfying their insatiable desire for drink."
At their peak there were over 400 bullock teams bringing copper to Port Wakefield and taking coal (much of it from Newcastle-on-Tyne) back to the smelter in Burra. Their route was slow and extraordinary. They literally could travel no more than 1 mile an hour (less was common) and there were no roads - and the tracks were terrible.
The journey, and the ferocious thirst of the bullockies, meant that towns (“settlements” more like it) grew up every 9 miles (15 km) along the way. They would leave Burra and head for Hanson. Then they would move on to Farrell Flat and on the evening of the third day they would reach Mintaro. From Mintaro they would move on the Leasingham, then Halbury and then Devil’s Garden outside the town now known as Balaklava.
The Devil’s Garden offers a rare insight into the difficulty of the route. It was located on one of the most hazardous sections of the journey. Once the bullock teams made it to the top of the sandhills, signalling the end of the “Devil’s Garden”, it was a relatively simple run to the coast. The outlook was bright, so the hillock became known as “Bright Outlook.”
The stretch across sand dunes became known as the Corduroy Road. To overcome the problem of the bullock drays becoming bogged on the sand ridges (mud in winter and deep sand in summer), native pine trees were cut down and the logs laid side by side along the affected sections of the track.  This meant that the drays, which would traverse the dunes on the timber road, could make their journey all year round, no matter what the weather
There were a number of areas in the sandhill country where stretches of corduroy road were laid. One still lies buried near the Devil’s Garden and there is a replica of the Corduroy Road at Urlwin Park Museum in Balaklava.

The Rocks Reserve
Located 12 km south-east of Balaklava (there are signs on the Balaklava-Owen Road), the Rocks Reserve is a pleasant 11.5 hectare picnic and walking destination on the banks of the Wakefield River. It takes its name from the attractive rock formations and the rock pools which have been created by the river. During the summer months the pools can dry up. It usually has water between April and November. There is a very detailed description of the Reserve at https://www.weekendnotes.com/rocks-reserve.

* Prior to the arrival of Europeans the district stood at the boundary between the Kaurna and Peramangk First Nation lands.

* In 1840 two explorers, John Hill and Thomas Burr, passed through the district.

* A settlement came into existence in 1849. It was one of the many stopover points for bullock drivers en route from the Burra copper fields to Port Wakefield.

* In 1850 James and Mary Dunn opened a hotel for the bullock drivers.

* In 1857 the bullock drivers stopped when a railway line was built from Gawler to Port Adelaide.

* The town proper was established in 1870 by an Adelaide grain merchant, Charles Fisher. The reason was that a 'tramway' had been completed between Hoyleton and Port Wakefield and there was no stopover point on the route.

* In 1870 the Balaklava Hotel opened its doors.

* The stopover at Balaklava meant that sheep and wheat graziers moved into the area.

* The first meeting of the town council occurred in 1878.

* In 1903 a local newspaper, the Central Advocate, was first published.

* Today the town is economically driven by wheat and sheep.

There is no dedicated local website. The local council website - https://www.wakefieldrc.sa.gov.au/page.aspx - can be useful. The Yorke Peninsula website has an entry on Balaklava. Check out https://yorkepeninsula.com.au/balaklava. 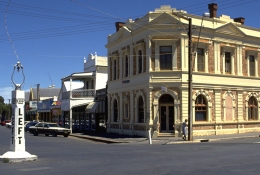 The unusual Keep Left sign in the centre of town 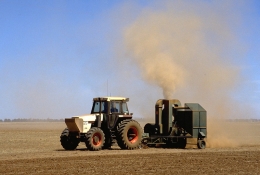 Preparing the wheat fields near Balaklava