Rural town noted for dairy, timber, fruit and potato growing and infamous for its magic mushrooms

Balingup is a tiny town located between Donnybrook and Bridgetown. It lies in gently undulating, rich and fertile country south of Perth. The town is essentially a rural service centre for a local economy driven by dairy, potato and fruit growing. In recent times the town has achieved notoriety because the surrounding forests are ideal for wild magic mushrooms and this has attracted "alternative lifestyle" people to the district. Not surprisingly the town now has craft shops selling handcrafted pottery, jewellery, sculpture, alpaca knitwear and herbal products.

Balingup is located 233 km south of Perth on National Route 1 via Bunbury.

No one seems to know exactly how the town got its name or the true origin of the name. One version argues that it is named after a local Aboriginal warrior named either Balingan or Baylya while another argues that 'balinga' is a local word meaning 'to climb'.

The Magic Mushrooms of Balingup
In recent years Balingup has acquired a reputation as the one place where, in season, a consumer of psilocybin (magic mushrooms) can be almost guaranteed to get a good haul. The police have worked to stop the practice and have set up roadblocks in those areas where it is known that the mushrooms grow. Judging by the number of arrests reported in the local papers they seem to have a reasonable success rate. For more information check out http://www.shroomery.org/forums/showflat.php/Number/10019576/fpart/13/vc/1#10019576 which includes a number of amusing reports about the police trying to stop the pickers and consumers. One report which is a reminder of the folly of youth and the ease of the police job explains that: "Donnybrook police have seized nearly 10 kilograms of magic mushrooms in the past week. On the first court date in Donnybrook since the mushroom season began, seven people were charged with possessing psilocybe, commonly known as magic mushrooms.

Magistrate Steve Wilson said more and more people each year were travelling to Balingup to pick the fungus. Since the season began, 18 lots of hallucinogenic fungus, totally 9.725 kilograms, have been seized by police." The seven people arrested and charged were all aged between 18 and 21.

The town used to celebrate this point of infamy with a huge Magic Mushroom (surely the most amusingly provocative "big thing" in Australia) in the park in town. I may have to modify this entry if someone has decided it has to be removed but it was looking like a real tourist attraction a decade ago.

Golden Valley Tree Park
Located off Old Padbury Road, 3 km from Balingup, this is a park "designed to inspire us with the beauty of its trees." The land was purchased in 1979 by the Western Australian Forests Department and, when fully developed, it will have over 50,000 Australian and 2,000 exotic trees. The aim is to plant the park out with gymnosperms (naked seed trees) and angiosperms ("seed in a vessel" trees)  or, in layman's language, pines, redwoods, gums, wattles, elms and willows. Visitors can join the 1,000 km long Bibbulmun Track in this beautiful 60 ha park. It is an ideal place for a picnic and fast becoming a wonderland of trees, including large deciduous trees, which have been collected from all over the world.

The Bibbulmun Track
The Bibbulmun Track, which starts in Kalamunda in the north, is a walking trail which goes for more than 1,000 km south to Albany. It passes through Balingup and can be joined at Golden Valley Tree Park. If you head south on the track there are a number of access points (see http://www.bibbulmuntrack.org.au/trip-planner/track-sections/balingup/) on the way to Donnelly River Village. Between Balingup and Donnelly River the track passes through particularly beautiful native forests. As the guide points out, "For the first time, south-bound walkers will see trees that appear nowhere else in the world. The jarrah, marri and yarri forests soon give way to the majestic karri forest, the second tallest flowering gum in the world."  The walk is particularly impressive in spring when wild orchids are in bloom. If you decide to walk the 140 km from Balingup to Donnelly River you will find that the area abounds in kangaroos and emus. Check out http://www.bibbulmuntrack.org.au/walk-the-track/ for comprehensive details.

* Prior to the arrival of Europeans the area around Balingup was occupied by members of the Kaniyang Aboriginal language group.

* In 1842 Major Irwin and a small party became the first Europeans to explore the district. They travelled overland from Albany to Busselton and passed by what is now known as Balingup Brook.

* In 1849 John Septimus Roe, the Surveyor General, journeyed through the area while surveying between Albany and Perth. He noted the wealth of jarrah trees in the district.

* In 1859 Walter Padbury became the first European to take up land in the district.

* Padbury was followed by other settlers and very slowly a small village grew up on the banks of Balingup Brook.

* In 1895 Jacob Hawter established the largest orchard in the state near the town.

* The town grew in the late 1890s. It was around this time that the Nelson Arms (used as both a pub and post office) opened; the railway line between Donnybrook and Bridgetown was completed; and the townsite was officially declared in 1898

* In 1933, in response to a booming dairy industry, the Balingup Cheese Factory was established. It closed in 1977.

* By the 1970s the area was attracting an alternative community. In 1975 Fred and Mary Robinson established the Universal Brotherhood commune on the Brooklands property.

* In recent times the township has acquired a reputation as an alternative lifestyle location. This is driven both by its idyllic rural setting and the easy access to magic mushrooms.

The town has its own website. Check out http://www.balinguptourism.com.au 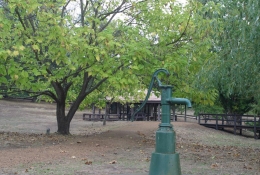 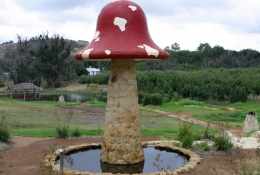