Important first and last road stop on the Nullarbor

Today Balladonia is nothing more than a roadhouse. It is the first stop on the Eyre Highway for drivers from Western Australia heading to South Australia and the last stop before drivers from South Australia reach Norseman. The stretch from Balladonia to Caiguna (146.6 km) is one of the longest stretches of straight road anywhere in the world. It is known as the "90 Miles Straight". The district receives only 263 mm of rain annually and the average temperature is in the low 30s in summer and between 18-20°C in winter.

Balladonia is located 938 km east of Perth via Coolgardie and Norseman and 1,757 km from Adelaide.

Balladonia takes its name from the Balladonia Station and the homestead which was built in the area after the first settlers arrived in 1879. It has been suggested that 'balladonia' is a local Aboriginal word meaning 'big rock by itself' but this is not listed in The Encyclopaedia of Aboriginal Australia.

Balladonia Museum
The Balladonia Hotel Motel complex contains a cultural heritage museum which covers the history of the local area from its Aboriginal Heritage through European exploration and settlement to the history of the Royal Flying Doctor, the construction of the Eyre Highway, information on the lives of early settlers and detailed information about the local fauna and flora. The highlight of the museum is its collection connected with NASA's Skylab space station which crashed nearby in 1979. It is said that President Jimmy Carter even rang the roadhouse to apologise for littering the local area. The museum is free.

The Boiler
Located near the forecourt and rusted over time, the historic boiler offers an interesting insight into the origin of one of the Nullarbor roadhouses. The sign on the side of the boiler points out: "This pre-Second World War boiler was transported from a mine site in Menzies (WA) in 1962 to form part of the original Balladonia Roadhouse complex. The roadhouse was built upon the recommendation of government to cater for travellers attending the 1962 Empire Games in Perth. Pre-1962 all refuelling took place at Balladonia Telegraph Station 25 km east. The old roadhouse remained in service until 1974 when it was rebuilt by the Prendiville family with the new existing hotel complex. Balladonia's name is derived from the Aboriginal (Mulba's tribe) word 'bariajuinya' meaning 'big red rock by itself'.

The Longest Golf Course in the World
Nullarbor Links Golf Course
A very typical Aussie outback joke the Nullarbor Links Golf Course is the world’s longest golf course with the first hole in Ceduna in South Australia and the 18th hole 1365 km away at Kalgoorlie. Check out the details at http://www.nullarborlinks.com. It is real and can be a lot of fun for committed golfers. The Balladonia hole comes with the warning "Beware of snakes!!".
Hole 12: Skylab Par 3 and is 175 metres. Located at the Balladonia Motel. This is a genuinely challenging Par 3 where accuracy is everything. Take the advice “Beware of snakes” seriously – particularly in the summer months.
Robbie’s Guide to the Nullarbor Links
A devilishly difficult Par 3 - 175 metres over trees and bushes to a small clearing containing a green. There is only a small area (20 metres) before the green which is safe, as there is dense scrub left, right and back. Hit straight.
The notes on the website explain: "Skylab was a space research laboratory constructed by the United States National Aerospace Agency (NASA) when in July 1979 it eventually succumbed to the Earth's gravitational pull, re-entered the atmosphere and landed in fiery chunks around Balladonia. Skylab served as a laboratory in earth orbit and was used to make solar-astronomical studies, long-duration medical studies of the three-person crew, extensive multispectral observations of the earth, and to conduct a variety of other scientific and technological experiments, such as metallic-crystal growth in the weightless state. Over the period before its final descent the world had become fascinated over where the doomed station would land. The US President (Jimmy Carter) personally rang Balladonia Hotel Motel to apologise for Skylab falling on them. For only the second time in its history the National Geographic Magazine stopped its presses to include the story. The local shire ranger (Mr David Somerville) was photographed giving the director of NASA a littering ticket, which received huge international coverage (the council later waved the fine).
Pat Prendiville is a modern day pioneer of Balladonia who purchased the Motel in August 1965 when he and his wife Paddy had a need to provide for their growing family of 11 children. Pat gave up his position that year as one of Western Australia's leading amateur golfers and moved to Balladonia for what was to be a 5 year stint but ended up directly and indirectly 45 years later (2009). Water was carted in from dams and pumped into an overhead tank and gravity fed to various points while fuel for the service station was trucked in from Norseman in 44 gallon drums. Traffic was minimal and the staff of 3 were lucky to service 10 vehicles a day. The original property was rebuilt in 1974." The tee is called the Pat Prendiville.

Hole 13: Fraser Range Sheep Station Sheep’s Back Par 3 and is 140 metres.
Located at Fraser Range which is 117 km west of Balladonia, this is the only hole on the entire course which is not located either on an existing golf course or behind a roadhouse. Fraser Range is located a few kilometres off the Eyre Highway and is a self-contained property offering accommodation. Just beyond the camping area and the kiosk is the short Sheep’s Back which is a hole where the major challenge is to know exactly how far to hit the ball on a downhill run. It is very easy to overshoot the green.
Robbie’s Guide to the Nullarbor Links
A mid-iron is required to hit this open green – which lies 140 metres and slightly downhill from the tee. A ball hit short should bounce towards the green and feed towards the left – provided the ground is not muddy.
The notes on the website explain: "The Fraser Range area is home to the world's largest Eucalyptus Hardwood Forest. The blackbutt, salmon gum and gimlet trees are a spectacular sight, often 20 to 30 metres tall, they attract an amazing collection of wildlife to the region. The Fraser Range Station was first settled in 1872, making the station the first to be founded in the Nullabor Plain area. The station is comprised of vast open grass flats, upon which the shepherds moved sheep over 100 years ago. The shepherds moved their herds from flat to flat before returning to the Fraser Range homestead for shearing annually. The station allows the international visitor to understand the old Australian saying "living off a sheep's back". The tee is called the John and Heather Campbell.

90 Mile Straight
Between Balladonia and Caiguna is the famous "90 Mile Straight". In modern parlance is it 146.6 km and is Australia's longest straight road and one of the longest in the world. The longest is probably in Saudi Arabia where there is a straight road which is 162 miles (260.7 km). Mind you, everything is relative. The railway line across the Nullarbor has a section which is 478 km without a turn.

Fraser Range Station
Located 90 km west of Balladonia this huge property was originally explored by John and Alexander Forrest on their expedition to Adelaide in 1870. Fraser Range Station was first settled by the Dempster brothers in 1872 making it the first station to be established on the Nullarbor Plain. It is not on the true Nullarbor Plain in the sense that it is "covered by dense hardwood eucalyptus forest composed of blackbutts, salmon gums and gimlets. The trees are substantial, some towering 20 to 30 metres tall, with dense undergrowth making vehicle access off cleared tracks impenetrable." The property offers accommodation and a range of tours. Check out http://www.fraserrangestation.com.au/ or phone (08) 9039 3210.

* Prior to European settlement the area was occupied by members of the Ngatjumay Aboriginal language group.

* The area was first settled by Europeans in the late 1870s and by the 1880s Balladonia Homestead, a remarkable stone building given the available building materials, had been completed. The homestead is located 28 km east of the roadhouse. It has been open to the public but in recent times the owners have closed it. Check at the Balladonia Hotel Motel for access.

* The roadhouse was first built in 1962 to cater from travellers making their way across the Nullarbor for the Empire Games in Perth.

* The current roadhouse was built in 1974 by the Prendiville family.

* In 1979 one of the US Skylab's fell to earth near Balladonia. There was much hilarity when the local Shire Council sent a littering fine to NASA. It is also claimed that President Jimmy Carter apologised.

* Today Balladonia is a roadhouse providing food, accommodation and fuel to people making the long drive across the Nullarbor.

For more details ask at the Balladonia Hotel Motel on (08) 9039 3453 or email info@balladoniahotelmotel.com.au.

Balladonia Hotel Motel http://www.balladoniahotelmotel.com.au/service-station.php and http://www.nullarbornet.com.au/towns/balladonia.html offer practical advice to drivers and people wanting to stay at the motel. 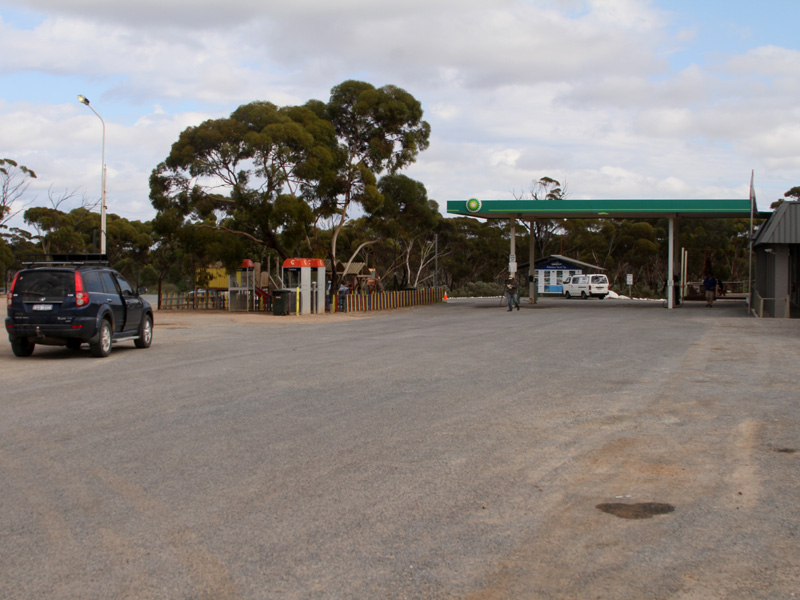 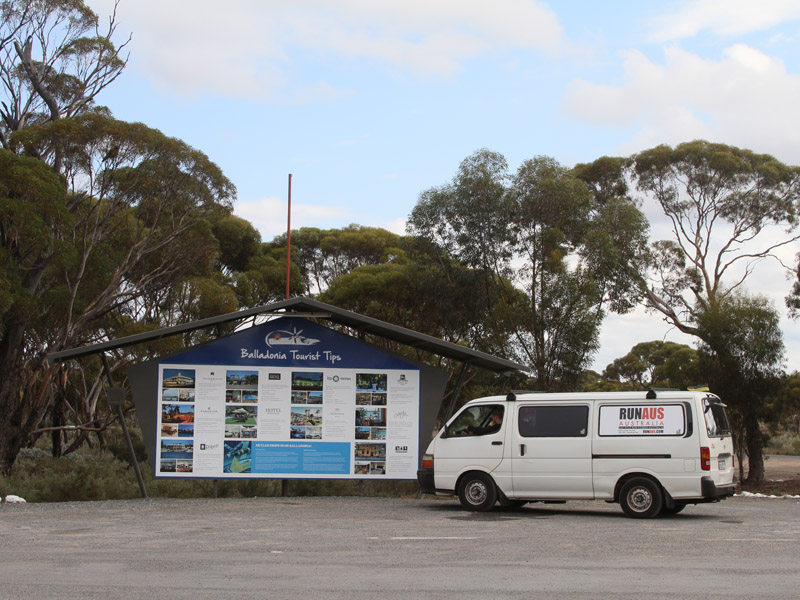 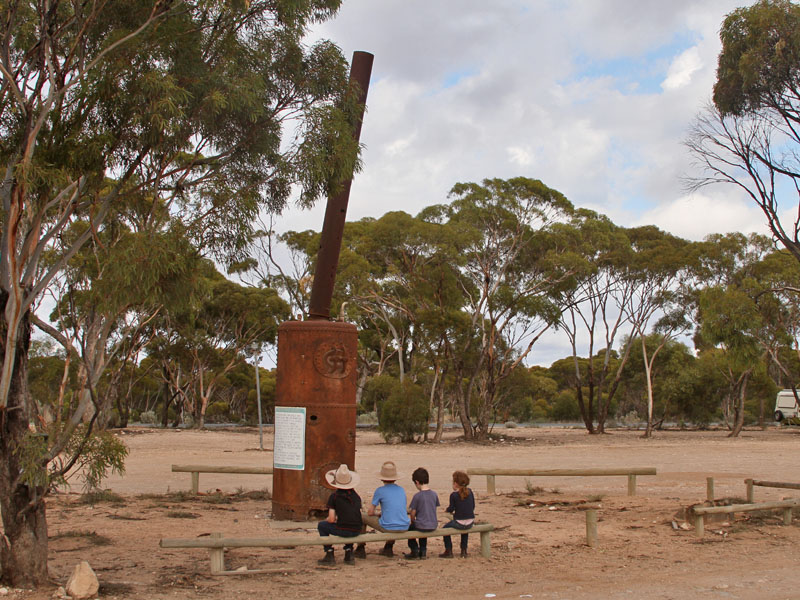 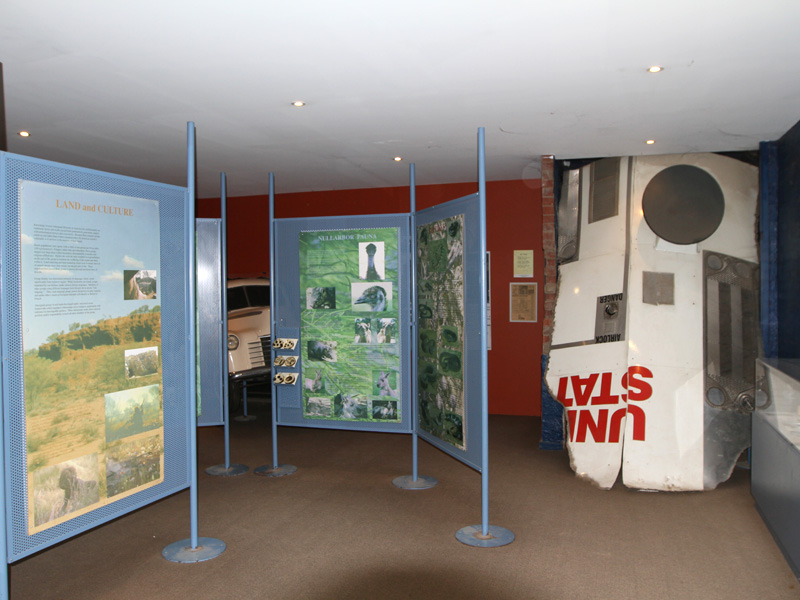 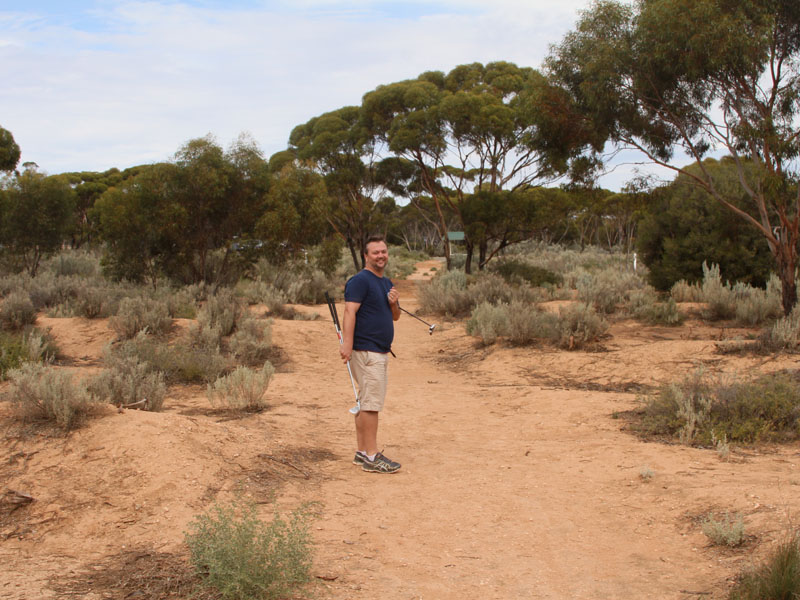 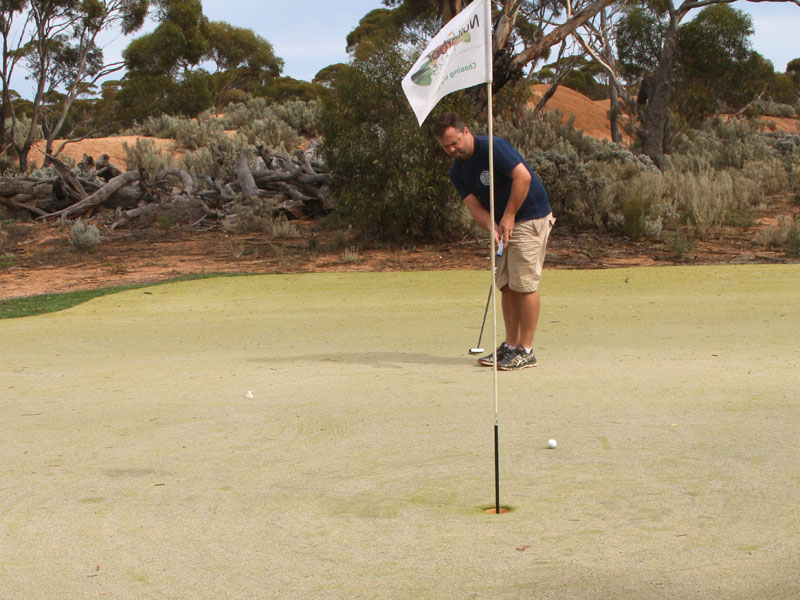 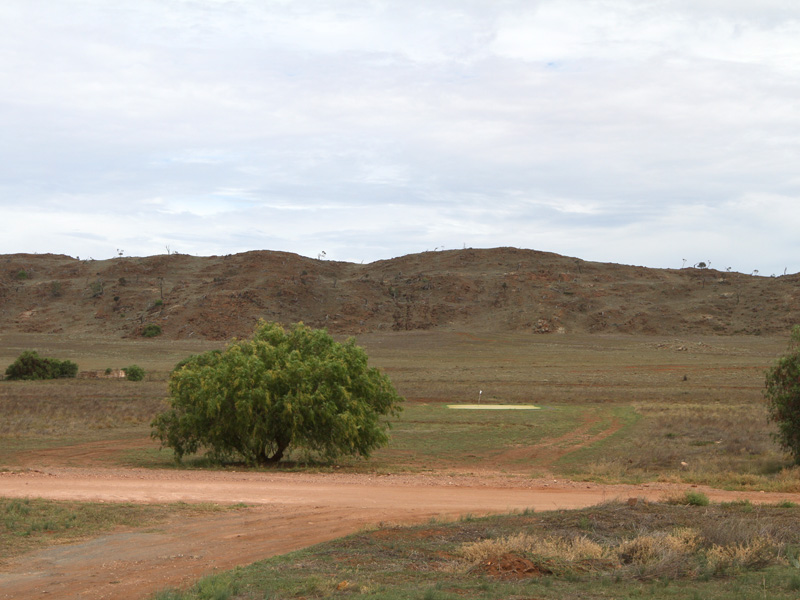 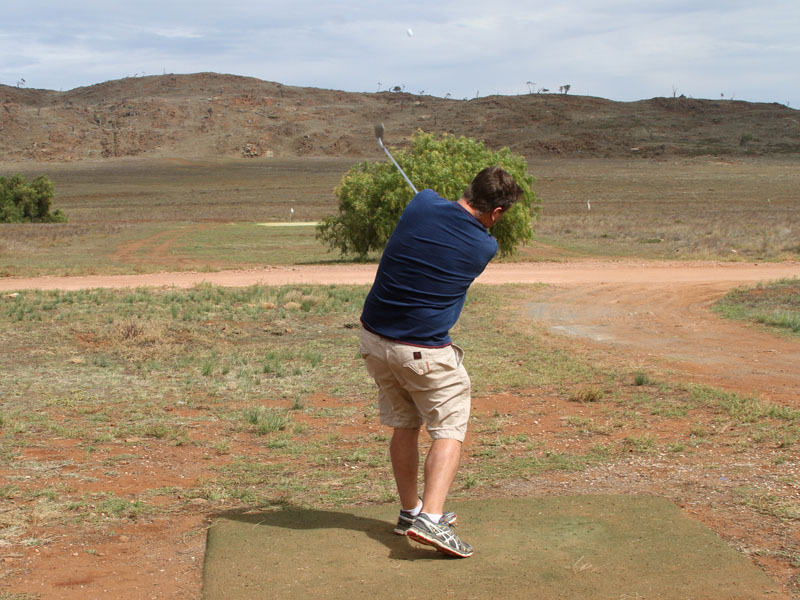 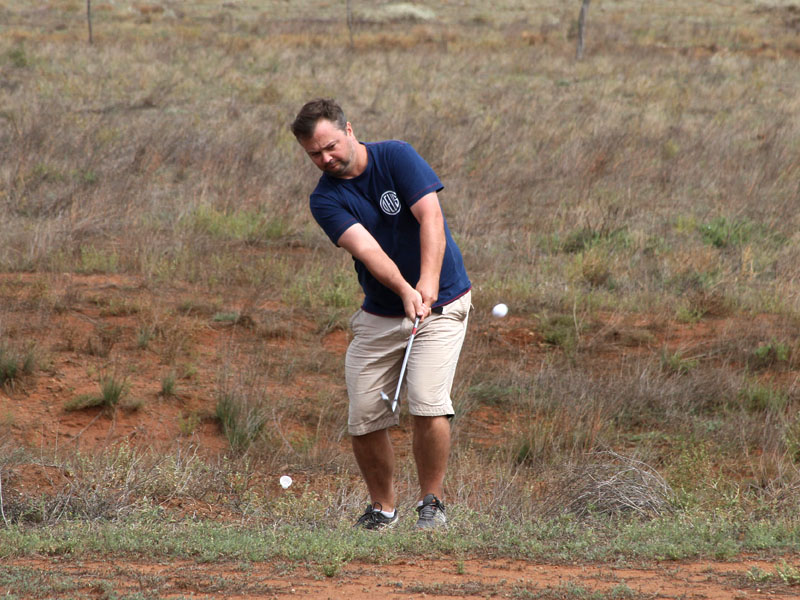