Important service centre and holiday town on the Richmond River

How the mighty have fallen. There was a time when Ballina, a major holiday and service centre on the New South Wales north coast, was home to the Big Prawn - an iconic "big" thing. Today the Big Prawn sits, rather forlornly, in the Bunnings car park, only a shadow of its former importance. But Ballina has much more than the Big Prawn. The Richmond River is ideal for swimming and fishing. The surf at the 32 km of beaches in the shire, like Angels and Shelly beaches, is consistently excellent. The town's Naval and Maritime Museum is one of the best in the country. And the town is known for its handsome and impressive 19th century public buildings.

Ballina is located 737 km north of Sydney via the Pacific Highway and is only 90 km from the Queensland border.

It is likely that there was a word,  'Bullenah' in the local Bundjalung Aboriginal language which meant  'place where oysters are plentiful' (certainly Ballina is famous for its huge an ancient middens) and that slowly changed to 'Ballina'.

Ballina Court House and Post Office
Located in River Street this elegant Court House was built in 1867 and is now a central feature of the town's main street. It is located between the Post Office and the Police Station - an impressive combination of substantial public buildings.

Ballina Naval and Maritime Museum
Located in Regatta Avenue (behind the Visitor Information Centre) is the Ballina Naval and Maritime Museum which includes, as its most famous and important exhibit, a 12 metre long and 6 metre wide vessel, Las Balsas, which landed at Ballina on 21 November, 1973. The balsa wood raft was floated across the Pacific from Ecuador, a journey of 3,760 nautical miles which was achieved in 178 days. It was originally planning to land at Mooloolaba in Queensland but coastal currents swept it south to Ballina. Also exhibited is a history of the Port of Ballina, a tribute to women in the Australian Navy, exhibits of river boats and tugs which worked on the Richmond River, and an excellent display covering the history of nautical transport from dugout canoes to diesel engines. Tel (02) 6681 1002 for more information or check out http://www.ballinamaritimemuseum.org.au.

Ballina Manor
Located at 25 Norton Street, and now a boutique hotel, the Ballina Manor offers half hour tours. It was originally the North Coast Girls College, was built in 1924-1925, and was the vision of local Methodist Minister, Rev. F. McGowan. It is a wonderful comment on the sectarianism and values of the 1920s that the school was specifically created to "combine facilities for the best education of Protestant girls, with the cultivation in them of graces of Christian character and womanhood. It will provide mental and moral equipment for life's larger duties. Whether of home, business, social or professional life, amid all the comforts and security of a home, where everything conduces to the real end of education, enlightenment, refined, true and worthy views of life, and of their duty to God, to themselves and to others". There is a detailed history, and information about tours, at http://www.ballinamanor.com.au or tel: (02) 6681 5888.

Fenwick House
Fenwick House at 3 Brighton Street, East Ballina was built by Captain Thomas Fenwick in 1886 in the style of a Scottish manor house. When it was built it was characterised by an English mahogany staircase which was estimated to cost £900, a slate roof and stained-glass windows. Today it is a private home. Although it has been altered over the years it is still an elegant example of a Victorian-era private residence. It is believed that Captain Fenwick paid £9000 and that the workmen were specifically brought to Australia to construct the mansion. Check out http://www.northernstar.com.au/news/house-full-of-mystique/1386431 for additional information.

Norman Sharpe Rotary Lookout
The Norman Sharpe Rotary Lookout was rebuilt in February, 2006 in a joint project between the Ballina Council, the Ballina Rotary Club who funded the project to the tune of $10,000, and a Work for the Dole team. The result was a larger and higher viewing platform to overlook Ballina, the Richmond River and local beaches. The structure offers 360° views over Ballina and the district. It is clearly signposted off Sulva Street in East Ballina.

Ballina Lighthouse
The Ballina lighthouse, also known as the Richmond River lighthouse, was first established in 1866. It was replaced in 1878 with the current lighthouse which was built to a design by the prominent Colonial Architect, James Barnet. The light was operating by 1880  and was visible 12 nautical miles out to sea. It was converted to acetylene gas in 1920, automated in 1926 and electrified in the 1960s.  It is currently located in a park above Lighthouse Beach, is elevated 35 metres above sea level, and can be seen 17 nautical miles out to sea. For more information check out http://www.lighthouses.org.au/lights/NSW/Richmond%20River/Richmond%20River.htm.

The Big Prawn
It was Louis and Attila Mokany who commissioned Adelaide architects Glenn Industries and sculptor James Martin to build the Big Prawn. There plan was for a series of "big" things running from Melbourne to Brisbane up the Hume and Pacific Highways. They were responsible for the Big Merino at Goulburn and the Big Oyster at Taree. The sculptor, James Martin, later admitted "I got the biggest tiger prawn I could find in Ballina, bought myself a magnifying glass, dissected it, and sat in a cafe and drew it from every possible angle I could imagine." The end result was 20 metres high, 4.5 metres wide and 27 metres long. It weighed eight tonnes and was unveiled in 1989 after 167 objections to the structure had been lodged by disgruntled local citizens. It was bought by a local developer in 1994. He ran it until 1998. It was subsequently sold to Santo Panisi who was only interested in the land and saw the prawn as a huge headache. Today it is part of the car park for the huge Bunnings hardware store. It is part of the town and no one, in spite of the protestations of a local architect who believed Ballina would become the "raw prawn capital of the world", really cares about this rather dated Big Thing.

The Ballina Loop
There is an excellent network of cycle paths known as the Ballina Loop. In total it is 11.5 km (it could as easily be walked) and includes Lighthouse Beach, Shelly Beach, Angels Beach, Chickiba Lake, Prospect Lake, Shaws Bay, North Creek, and crosses Missingham Bridge and Prospect Bridge. Along the way there are cafes and picnic locations. It is an ideal way to see the town and its surrounds. For more information ask at the Ballina Visitor Information Centre. The route departs from the Information Centre. There is a downloadable map which can be accessed by typing "Ballina bike map brochure" into Google.

The Beaches
One of the most persuasive reasons for visiting Ballina is the quality and quantity of excellent beaches. The shire has eight beaches and no visit to the area is complete without trying the surf at:

* Seven Mile Beach, Pacific Parade, Lennox Head (patrolled in the summer months) and there is a justifiably famous right hand break for surfers at Lennox Point.

At each of these excellent destinations the Pacific Ocean breaks on beautiful, firm sandy beaches and there are usually excellent surfing conditions.

The Walks in the Area
(1) Coastal Walk - there is a glorious 3.5 hour walk from the Pat Morton Lookout at Lennox Head to Ballina past rocky headlands and beautiful beaches.
(2) Ballina Waterfront - a two hour walk (1 hour each way) from Fawcett Park to the North Wall beside the Richmond River.

* Prior to the arrival of Europeans the Bundjalung Aborigines had lived in the area for thousands of years (the middens on the coast are at least 2,000 years old) and it was estimated there were at least 500 living in the area at the time of European settlement. They hunted the pademelons, wallabies, bandicoots and flying foxes in the hinterland and, in September, headed for the coast to harvest the shoals of salmon which were caught inside the surf and killed with spears.

* The first European in the area was Captain Henry Rous who, on 26 April 1828, named the Richmond River after the fifth Duke of Richmond.

* In less than a year timber cutters arrived. They were looking for stands of cedar.

* In 1842 the Sally, a boat from Sydney, brought cedar cutters, their wives and children, to the area.

* The first settlement developed at East Ballina where the combination of high ground and reliable fresh water saw a village named Deptford grow up near Shaws Bay.

* There was a short goldrush in the 1860s when gold was found in the sands at the mouth of the Richmond River.

* During the 1860s Ballina became the port for Casino and Lismore.

* By 1875 there were 75 sugar mills operating along the banks of the Richmond River.

* In 1879 the current Ballina lighthouse was constructed.

* By 1891 there were only nine sugar mills left with the Alstonville, Rous and Broadwater mills being the largest.

* The breakwater at the mouth of the Richmond River was completed in 1908 after over 90 ships had been wrecked on the sand shoals.

* The Richmond River continued to be used for sugar cane until 1974.

There is a local website - http://www.discoverballina.com.au/v1 - which is particularly good for accommodation and eating in the area. 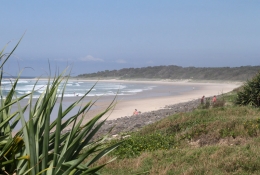 Angels Beach to the north of Ballina 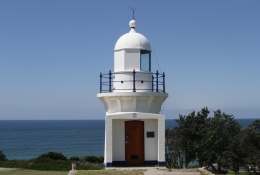 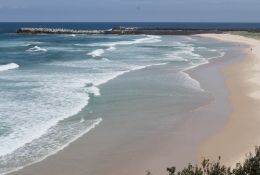 Lighthouse Beach and the walls at the mouth of the Richmond River. 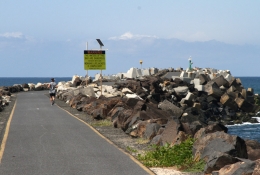 The northern breakwater at the mouth of the Richmond River. 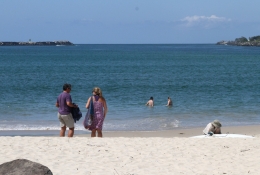 The beach near Kingsford Smith Drive and the mouth of the Richmond River with the north and south breakwaters. 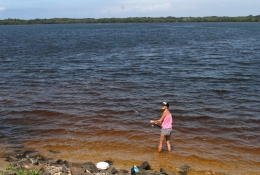 Fishing in the Richmond River at Ballina. 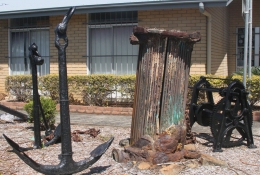 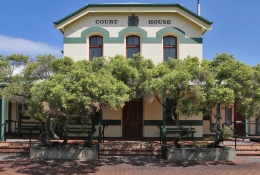 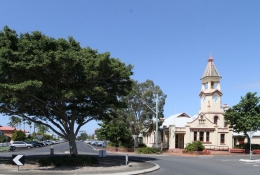 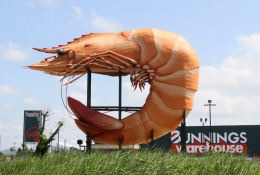 The Big Prawn in the Bunnings Car Park.