Quiet village on the Glenelg River

Balmoral is a tiny rural service centre situated on the banks of the Glenelg River. It is little more than a few streets surrounded by rural countryside and river red gums. It came into existence as a suitable place to ford the Glenelg River and today is known for the Rocklands Reservoir, built in 1953, which is excellent for fishing, swimming and  camping.

Balmoral is located 332 km west of Melbourne via Ballarat and Dunkeld.

The local Aborigines called the district 'Darrangurt'. Early European settlers, arriving in the 1840s, gave it the unromantic name of 'Black Swamp' but, when a large number of Scottish settlers moved into the district, it was renamed 'Balmoral', the name of the royal castle in Scotland which had been acquired by Prince Albert for Queen Victoria.

Heritage Sites
In Seymour Park on the corner of Glendinning Street and Stirling Street is a map of the tiny town (it really only has three streets each way) which lists 19 places of interest in the town. Many of them are of marginal interest to the visitor. I have written in more detail about the places worth visiting.

1. Court House and Gaol - This rather ordinary weatherboard building, dating from 1877, is located near the end of in Glendinning Street. It has a small display of historic items and it can be inspected by appointment. Ask at the Community Store for details.
2. Ironstone Gaol - The Ironstone Gaol (1866) can be seen behind the courthouse although it is not open for inspection. It is known that the Bunadik Aborigines, who lived in the area, had a campsite where the gaol is now located. There is a story about the gaol being haunted. A young man was locked in the gaol and demanded to be let out because he claimed "there's someone else in here with me" - which sounds like a great excuse to be released.
3. Old Swimming Hole - dating from 1926.
4. Swimming Pool - The current swimming pool was built in 1967.
5. Recreation Reserve
6. Balmoral Centre for Education
7. Old Railway Bridge
8. Glenelg River Ford - Located along Rocklands Road on the eastern side of town is the original ford over the Glenelg River which was used in the mid-19th century by Cobb & Co coaches and passengers travelling between Melbourne and Adelaide. There are interpretative signs in the adjacent park. "Two cables were strung across the river to mark the edges of the ford."
9. Old Wool Wash - the sign explains that "The old Woodlands woolshed ... had railway lines from the shed to the Woolwash on the other side of the bridge where the workers washed the wool and laid it out flat to dry. Then they would rail it back to the shed to press and send away."

Balmoral Mural - Located at 11 Glendinning Street on the wall of the Community Store, this large contemporary public outdoor mural depicts local birds and native flora. It was painted by Rowena Martinich and Geoffrey Carran in 2013.

10. St Mary's Church which dates from 1894 is located on the corner of Stirling and Bell Streets. It is listed in the Victorian Heritage Register: "a modest but fine example of the Victorian Gothic Revival style. The building is of simple design, constructed of locally made pressed red brick and render. The church has three bays with a chancel and porch, the buttresses dividing the bays. A large stained glass window dominates the interior of the church, depicting St. Peter, St. Andrew and Christ. The Armytage family from nearby Fulham Station donated this window, and Mrs. Armytage also laid the foundation stone of the church. Furniture, furnishings and memorials commemorate other local families. The relatively late date of construction indicates a stronger presence of Anglicans in the area at the time. Until St. Mary's was constructed in 1894, Anglican services were held in the Presbyterian Church, serviced by ministers who were based at other towns, such as Sandford or Edenhope ...  Two mature Cupressus sempervirens (Pencil pine or Italian Cypress) specimens stand adjacent to the gate and are identified by a small brass plaque which states they were planted to commemorate Queen Victoria's Diamond Jubilee in 1897. A third pine is located at the north west corner, the three being the survivors of a row marking the Stirling Street boundary of the church. There are also conventional ornamentals. Near the porch stands an ornate cast iron street lamp, now electrified, which was one of four kerosene street lamps which lit nineteenth century Balmoral. The church building, its interiors and grounds retain a very high degree of integrity and are in excellent condition." There is more detailed information at http://vhd.heritagecouncil.vic.gov.au/places/23235/download-report.
11. Glenelg River Rosemary Farm - now known as Glenelg River Herbs and located at 6600 Natimuk-Hamilton Road. "In addition to supplying premium quality fresh rosemary all year round for markets, supermarkets, providores and food processors, we also grow fresh sage, thyme and oregano. All of our herbs are also available as a premium quality dried herb, available in small or bulk quantities." Check out https://www.glenelgriverherbs.com.au for further details.
12. St Patrick's Catholic Church - listed in the Victorian Heritage Register which notes that it is "A simple rendered church, constructed from locally made bricks, St Patrick's is built in the Gothic revival style, formerly of three bays, now four, with a narthex or porch and a chancel also added in the early twentieth century. The interiors have been substantially modified in a recent modernisation with the removal of pews and the introduction of carpet being the most obvious changes. The original part of the church dates from 1895, although Catholicism was active in the township well before that time. Prior to the construction of the St. Patrick's, irregular services were conducted by itinerant priests from the Casterton (later Harrow) parish. Mass was held in the various places around the township, including the Mechanic's Institute, Western Hotel and the Court House. The architect of St. Patrick's is not known, but the builder's name was Mr. Wiltshire. The Church retains a high degree of integrity externally and fair degree of integrity internally subsequent to recent modernisation." For more information check out http://vhd.heritagecouncil.vic.gov.au/places/23236.
13. St Andrews Uniting Church
14. The Old Manse
15. Balmoral Cemetery
16. Balmoral Bush Nurse Centre
17. A Bush Track to the River - there is a pleasant walk along the Glenelg River from the Rocklands Road bridge to Glendinning Street. It is known as the Wetlands Walk.
18. Remains of a Timber Drying Kiln
19. Balmoral Town Hall

Rocklands Reservoir
Rocklands Reservoir (a part of the Wimmera-Mallee irrigation system) is located 13 km from Balmoral on the Rocklands Road. It was constructed in 1953 to service the Wimmera/Mallee stock and domestic supply scheme. A major local attraction, it is a popular fishing and boating area which is surrounded by state forests and home to a number of camping areas which are located in open box woodland on the shores of the reservoir. The park is notable for wildflowers in the spring, Aboriginal rock art, impressive bluffs and panoramic views. There are walking tracks and picnic areas and bush camping is permitted. It is popular for boating, waterskiing, sailing, swimming and fishing for redfin and trout. For a good transport safety map download https://transportsafety.vic.gov.au/__data/assets/pdf_file/0009/30114/Rocklands-Reservoir-map.pdf.
Rocklands Road heads east from Balmoral. After about 13 km you will come to an intersection which presents three possibilities: (a) take the signposted right for Rocklands Caravan and Camping Park and the dam wall where there is a boat ramp; (b) proceed straight ahead along Cherrypool Road. It is a beautiful scenic drive that heads east and north through Black Range State Park. Located 5 km along Cherrypool Road is a turnoff to Brodies Camping Area. Another 7 km along Cherrypool Road is Mountain Dam Camping Area which has fireplaces, toilets, a boat ramp and picnic facilities and a further 8 km along is a turnoff into Muirfoot Track which leads to a walking trail to Mt Byron.  Or (c) turn left into East Telangatuk Road. After about 15 km it leads into Rees Road which goes (after about 12 km) to  Black Range Picnic Ground. If you ignore this turnoff East Telangatuk Rd continues north. After about another 8 km there is a turnoff on the left to the Wash Tomorrow Caravan Park adjacent Toolondo Reservoir which is considered excellent for brown trout fishing.

Toolondo Reservoir
The excellent https://www.freerangecamping.com.au/directory/item/glendinning-rocklands-state-forest-fc notes: "Toolondo is famous for its fighting Brown Trout while Redfin predominate at Rocklands. The majority of fish, including trout, are taken by boat fishing around trees with bait such as worms, gudgeon and yabbies or by spinning in open waters."

Glendinning Homestead
The Glendinning Homestead complex includes an 1850s shearing shed and the grand Edwardian homestead which was built of handmade bricks in 1909. It is listed on the Victorian Heritage Register which notes its significance as: "Glendinning Homestead Complex is of historical significance for its connections with the very early pioneers, George Urquhart, Christopher Glendinning and Alexander Macintosh and subsequently with the partnership, Grice, Sumner and Co. while under the long-term management of Robert Seymour. From the early twentieth century, it was connected with the later generations of important grazier families, specifically the Barber and Falkiner families. Glendinning was the 'grave' of Big Lizzie before it was relocated to Red Cliffs in 1971. The complex is of architectural significance firstly for its very early drop-slab woolshed, later men's quarters and associated structures and secondly for the third homestead, designed by W. Mackey and built by J. Wiltshire, which is a particularly fine, distinctive and substantially intact example of the Federation/Queen Anne style." For more detailed information check out http://vhd.heritagecouncil.vic.gov.au/places/23434/download-report.

* The area was known as 'Darrangurt' by the local Jadawadjali Aborigines. They constructed large-scale artificial drainage systems to the north-east of Balmoral.

* As early as c.1700 A.D. channels, which covered an area of 3 km, drained marshy ground lying between two natural swamps. When it rained the swamps overflowed and eels and fish were flushed into the channels where a series of traps were established. The main channel was originally 2.5 metres wide and over one metre deep. Sections of it are well preserved.

* The first Europeans in the area were the party of Thomas Mitchell who passed nearby on their Australia Felix expedition of 1836.

* The first land was taken up by whites around 1840 and several homesteads from the 1840s remain.

* The impressive home at 'Fulham' was erected of coursed rubble basalt in the 1840s for pastoralist George Armytage, a major landholder in the district.

* The original 'Congbool' homestead on Mathers Creek, a timber-slab homestead, was constructed between 1842 and 1859.

* The township began to emerge around a river crossing on the Glenelg which was used by those travelling between Melbourne and Adelaide.

* In 1842 an inn was built, along with a fellmongery, store and woolshed.

* A police camp was established  in the 1850s to catch Chinese immigrants who landed at South Australia and walked to the Victorian goldfields.

* The town was surveyed in 1852 and given the name Balmoral.

* By 1870 the red gums of the area were being cut down by timbergetters.

* On 17 March, 1946 the Glenelg River flooded, rising more than 3 metres in a night and flooding the surrounding countryside.

* In the early 1950s, 600 construction workers arrived in the area to build the Rocklands Dam.

There is no local visitor information centre. The closest is at Hamilton or Horsham. Check out Horsham and Grampians Visitor Information Centre is located at 20 O'Callaghan's Parade,Horsham,  tel: (03) 5382 1832 or 1800 633 218.

A detailed history of the town can be found at http://www.victorianplaces.com.au/balmoral. The Hamilton website has useful information. Check out http://www.hamiltonvictoria.com.au/main.asp?_=Balmoral. 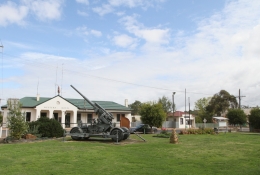 Seymour Park in the centre of the village 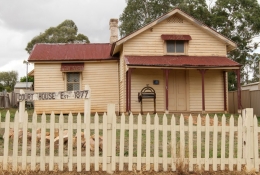 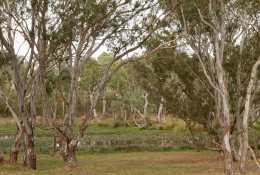 The park between the end of Glendinning Street and Glenelg River 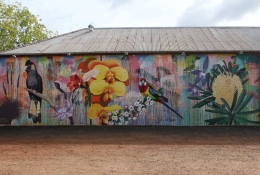 The mural on the wall of the village Community Store (2013) 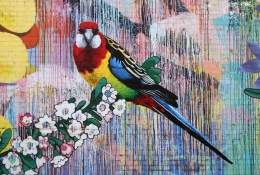 Detail of the mural on the Community Store wall. 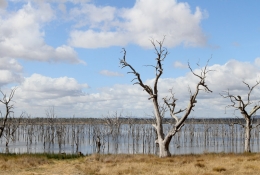