The town at the top of Cape York

There are 4WD enthusiasts who see various roads and destinations as challenges and are happy, and determined, to meet the challenges no matter how difficult. One such challenge is the road, mostly dirt, impassible during the wet summer months, and difficult because it involves crossing so many rivers, that runs from Cairns to Bamaga at the very top of Cape York. Bamaga is an isolated settlement where most of permanent residents are Torres Strait Islanders and mainland Aborigines. This, however, has not stopped the 4WD fraternity who, increasingly, make the long trip to the top of the continent. The shared experience has led to a sort of shared joke amongst the 4WD enthusiasts. When asked what they did when they arrived at Bamaga after their monumental journey they reply: "We went to Thursday Island. There's nothing else to do." While this is not entirely true it does highlight the fact that most people who travel to the tip of Cape York do so because it is one of those challenges which seem to be made meritorious by the simple fact of accomplishment.

Bamaga is located 61 km north of the Jardine River and 983 km north of Cairns via the Peninsula Development Road.

Bamaga was the name of the leader of the Saibai islanders (Bamaga Ginau - 1893-1949) who were settled in this isolated township by the Department of Native Affairs shortly after World War II.

Driving to Bamaga and Cape York
There is a genuinely outstanding guide to driving up Cape York from Cairns. It has every piece of information you could possibly want. Check it out at http://pegsontheline.com/self-drive-to-cape-york. It has lots of excellent photos and the advice is practical, sensible and timeless. There is also a useful, official site which looks at the road conditions. Check out http://www.tourismcapeyork.com/the-region/road-conditions. In the Bamaga area there are supermarkets at Seisia and Umagico and there is a Post Office, general store, petrol station, pub and bakery in Bamaga.

The Tip (of the Cape)
Cape York is known to locals simply as "The Tip". It is located 30 km north of Bamaga via the Lockerbie Rainforest, the northernmost rainforest on the Australian mainland. The road can be difficult if there has been rain and the rainforest is attractively dense leaving the feeling that you are driving through a verdant tunnel. Technically the rainforest is a semi-deciduous mesophilic vine forest. There is a good description of the route on https://www.capeyorkaustralia.com/lockerbie.html. Everyone who reaches Cape York seems eager to take a photograph of the wonderfully simple sign which reads "You are standing at the northernmost point of mainland Australia." It is worth noting that Cape York has the Coral Sea lying to the east, the Arafura Sea and the Gulf of Carpentaria lying to the west and the Torres Strait lying to the north.

Cook and the 'Possession' of Australia
In his Journal, Captain James Cook wrote, on 22 August 1770, of the events that took place at Possession Island off Cape York: "Having satisfied myself of the great Probability of a passage, thro' which I intend going with the Ship, and therefore may land no more upon this Eastern coast of New Holland, and on the Western side I can make no new discovery, the honour of which belongs to the Dutch Navigators, but the Eastern Coast from the Latitude of 38 degrees South down to this place, I am confident, was never seen or Visited by any European before us; and notwithstanding I had in the Name of his Majesty taken possession of several places upon this Coast, I now once More hoisted English Couleurs, and in the Name of His Majesty King George the Third took possession of the whole Eastern coast from the above Latitude down to this place by the Name of New Wales, together with all the Bays, Harbours, Rivers and Islands situate upon the said coast, after which we fired three Volleys of small Arms which were Answered by the like number from the ship."

Thursday Island or Waiben
There are a number of ferries that ply the waters between Cape York and Thursday Island. The most popular is Peddells Ferry (http://peddellsferry.com.au) which has been operating since 1979, takes 70 minutes to make the crossing, and operates every day leaving Seisia at 8.00 am and 4.00 pm and returning from Thursday Island at 2.30 pm and 4.00 pm (these times vary - check http://peddellsferry.com.au/ferry-timetable.) There are a number of walks on the island - it is only 4 km in diameter - and visitors are encouraged to walk along the beaches, enjoy the tropical flora, take in the view from Green Hill Fort and learn about the island's role in the defence of Australia during World War II.
Peddells offer a very reasonably priced tour of the island which , at http://peddellsferry.com.au/thursday-island-historic-scenic-bus-tours, they describe as: "This award winning tour will provide you with a glimpse into another culture and bring the island’s history to life through your guides easy storytelling style, driven by pure passion for their island home. Peddell’s Thursday Island Tour is also a great way to take in the stunning panoramic island views and enjoy the vivid and interesting displays of Thursday Island’s hilltop museum. Housed in the refurbished underground tunnels and rooms of Green Hill Fort, the Museum features three main local historical industry themes; Pearling, Shipping and Military.  This magnificent example of pre-federation coastal military architecture was built in response to a Russian war scare. The Fort’s now silent 6″ breach loading guns jut out menacingly over the islands’ main approaches. You will learn of the extraordinary impact the pearling industry had on this little community when you make a stop by the striking Japanese Pearl Divers Memorial located at T.I. cemetery on the northern side of the island. It is here that over 700 pearl shell divers were laid to rest and later a memorial was placed to remember all those that lost their lives in pursuit of the highly prized mother of pearl shell. A memorial to the designer of the Torres Strait flag is found here as well. Peddells Thursday Island Tour offers all this plus a scenic drive around the island complimented by your guide’s signature lively and informative commentary."

The Horn Island
The Horn Island tour (se http://www.torresstraitheritage.com/blog/?page_id=28 for specific details and costs) is conducted in an air conditioned bus and includes a visit to the Torres Strait Heritage Museum which provides details of the role of Horn Island in the Second World War including gun emplacements, trenches, an aircraft wreck, the local airstrip and an underground command post. The Heritage Museum also features a display of pearl diving memorabilia and Torres Strait art. There is a very detailed history of the Torres Strait at http://www.torresstraitheritage.com/blog/?page_id=49.

Somerset
Located 27 km north-east of Bamaga, beyond New Mapoon, are the ruins of Somerset, a settlement which was established in 1863 by John Jardine who had visions of the town eventually becoming a major port. Jardine had been appointed police magistrate and gold commissioner of Rockhampton in 1861 and in 1863 he became the government resident in Somerset.
While Jardine sailed up the coast, his sons, Frank and Alexander, walked and rode from Rockhampton bringing cattle to the new settlement. They departed on 14 May, 1864 and arrived at Somerset on 2 March, 1865. On the way they were harassed by Aborigines and spent most of their time hacking their way through jungles and traversing swamps. By the time they reached Somerset the 42 horses and 250 cattle they had started with had been reduced to 12 horses and 50 cattle.
Frank Jardine went on to marry Sana Solia, the niece of the King of Samoa, and when the settlement at Somerset was moved to Thursday Island in 1877 he stayed on as a kind of tropical lord holding elaborate banquets for any passing visitors. He died of leprosy in 1919. The ruins are well worth visiting. There is a beautiful beach at Freshwater Bay and the perched lake, Lake Wicheura, offers views across to the sea. To learn about the local indigenous culture, check out http://www.nma.gov.au/encounters_education/community/somerset.

Seisia
Located 6 km north-west of Bamaga, Seisia is noted particularly for its fishing is said to be outstanding from the jetty and there are fishing charters to the Jacky Jacky Estuary and the Jardine River. Check out http://www.capeyorkcustomsportfishing.com.au/. They proudly boast: "Troll, cast and drift the coastal flats for six species of Trevally, Queenfish, Salmon and Barracuda or explore for the much sought after Permit and Giant Herring ... Cast poppers, jigs and troll the off-shore islands for Mackerel, Queenfish, Giant Trevally and Tuna ... Enjoy the tranquillity of a fresh water drift down the crystal clear waters of the Jardine River where the hook-ups are visual on the prehistoric Saratoga, Barramundi and numerous schools of Tarpon and Coal Grunter ... Float around in the lily pads on the most pristine fresh water lagoons on Cape York for a combination of Saratoga, Barramundi and Tarpon ... Go back to basics with a simple river bait fishing trip for Black Bream, Grunter, Mangrove Jack, Cod, Salmon, Barramundi, Fingermark and more." Tackle and bait are available at a number of local outlets.

Jardine River National Park
This impressive and vast wilderness area lies to the south and east of Bamaga and covers 237,000 ha. It is popular with people travelling to Bamaga because there are two falls - Fruit Bat Falls and Eliot Falls - where it is possible to swim and cool off without the constant fear of crocodiles. The Queensland Government Department of Environment and Science website (https://www.npsr.qld.gov.au/parks/jardine-river) has detailed maps and extensive information on the camping areas within the park and the major attractions.

* Prior to the arrival of Europeans the Cape was inhabited by Torres Strait Islanders and Aboriginal people from the Yadhaigana language group. Today the town is recognised as land owned by Injinoo, Umagico and New Mapoon, and the Islander communities of Seisia and Bamaga.

* Off the cape, at Possession Island, Captain Cook formally took possession of the east coast of Australia in 1770.

* During World War II a military airstrip was constructed by American army engineers.

* In 1948 people from Saibai Island moved to Bamaga.

* The construction of Bamaga township began in 1952.

* By 1954 the settlement had a hospital, school, general store and a number of houses.

* In 1985 the Bamaga Island Council was established.

* A bridge across the Wenlock River was completed in 2000.

There is no Visitor Information Office in Bamaga. For information contact tel: 1800 174 895. 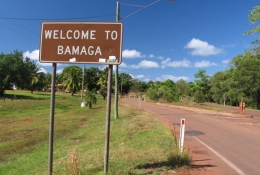 Finally, after nearly 1000 km from Cairns, the entrance to Bamaga is reached. 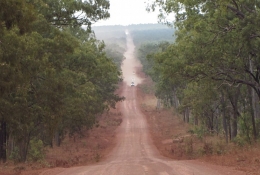 The long dirt road that is the Peninsula Development Road 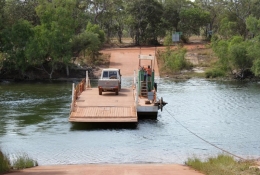 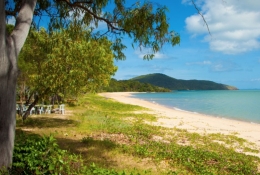 The beaches around Cape York can be spectacular and beautiful 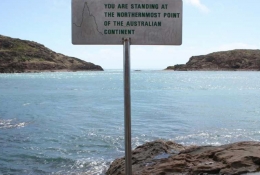 The famous sign on Cape York where everyone takes a photo.