Quiet, attractive rural township in the hinterland behind Byron Bay

Bangalow is a one-street town. Certainly there are other streets but if you are looking for a good restaurant (the town has a number of exceptional restaurants) or just wanting to window shop then walking from one end of Byron Street (yes, it does go to Byron Bay) will ensure that you pass the Windhorse Gallery, The Rug Shop, Designbank and culinary wonderlands like Choux Choux Patisserie and a cafe called Butcher Baker. The town likes to call itself "just a bit above Byron" and, in terms of classiness, it is a wonderfully apt description. It is no accident that it was originally named Byron Creek or that Byron Bay-based novelist, Robert Drewe, has described the town as "good coffee, good restaurants, a good bookshop, a good pub, and good, hospitable people." It lies in an area of rolling hills where the dominant agriculture is dairy cattle, fruit trees, macadamia nuts and coffee plantations.

Bangalow, a charming rural town recently bypassed by the Pacific Highway, is located 758 km north of Sydney. It is 165 km south of Brisbane and 13 km west of Byron Bay.

It is possible that 'bangalow' meant a type of palm tree or 'a low hill' in the language of the Banjalang Aboriginal people who lived in the region before European settlement. Certainly when the railway arrived in 1894 the local station was named Bangaloe. This was changed to Bangalow around 1907.

Bangalow Heritage Walk
Still in its infancy, this Heritage Walk is designed to allow visitors to walk from the Heritage House Museum through the town and identify, and learn about, the history of the town's most interesting buildings. Plaques explaining each building are located outside. Buildings of interest include the Masonic Hall, the A&I Hall, the Catholic Church in Deacon Street, Readings building in Lismore Road, a number of Federation-era timber houses and the Bangalow Heritage House, Museum and Tea Room.

The Channon
The Channon is an attractive village 33 km west of Bungalow. Surrounded by an area known for its permaculture and organic farming, it is perched on a hilltop which is noted for its artistic alternative community.  The village is named after a local palm which, it is believed, helped Bundajung Aborigines to find their way to the coast. The centre of the cultural life of the village is the tavern and The Channon Craft Market which is held on the second Sunday of each month. For more information check out http://thechannon.com.au.

Newrybar
Almost not a town at all, Newrybar has achieved fame in recent times because of the exceptional "casual elegance" of Harvest at 18 Old Pacific Highway, which is a genuinely excellent restaurant (one hat in the Sydney Morning Herald Good Food Guide) open for breakfast and lunch seven days a week and for dinner on Thursday, Friday and Saturday. Check out http://harvestcafe.com.au for bookings or tel: (02) 6687 2644.

Crystal Castle and Shambhala Gardens
Crystal Castle is la delightful way to spend a few hours soaking up the ambience of a destination famed for its crystals, its interesting cafe and its huge Buddha. It is located at 81 Monet Drive, 17 km north of Bangalow. As the website explains: "In 1986, Naren King was invited to a new years party at a magnificent unique building on 25 hectares near Mullumbimby. Eccentric architect, Edwin Kingsbury, had created a concept of 'harmonious architecture', a round central building with 4 radiating wings, no 90-degree angles, and magical reflecting ponds. All built where the ley lines, or earth’s energy lines, intersect ... Hence, 'The Castle', as the locals jokingly called it, began operating as a crystal business, accompanied by the raising of horses and chickens, and years of massive re-planting of the decimated land, which had been cleared for grazing and banana growing ... Crystalight was Australia’s first direct importer of quality natural crystals from around the world, supplying wholesale crystals from the hills of Mullumbimby. Local hippies got wind of something interesting going on and kept ‘dropping in’ to marvel at the crystals ... Naren has spent over 25 years travelling the world in search of extraordinary crystals. At one stage so much rose quartz was imported that it was used to line the pathways around the Castle, which saw the gardens begin to take shape. People loved spending time surrounded by such beauty and started hanging around; hence the Café was built to provide refreshments." Today the main building, which houses the Lotus Cafe, Crystal Gallery, Words of Wisdom Bookshop, Vibrasound Room, Body Temple and Wearable Arts Gallery lies at the centre of gardens where the visitor can walk past statues of the Buddha, Ganesh, Garuda, Vishnu and Lakshmi and explore the Rose Quartz Sacred Circle, Bamboo Avenue, Labyrinth and Rainforest Walk. It is open daily from 10.00 am to 5.00 pm, tel: (02) 6684 3111. Check out http://www.crystalcastle.com.au for more details.

Minyon Falls
Minyon Falls are located 24 km north west of Bangalow via Binna Burra and Federal. Minyon Falls Road passes the Minyon Grass Picnic Area. From the Picnic Area there is a  2 km walking track to the base of the falls or, alternatively, there is a picnic area and recreation site near the falls. The Minyon Falls are impressive. They tumble 97 m down sheer cliffs, formed by solidified lava, into a particularly beautiful gorge below. They are part of the Minyon Falls Flora Reserve which has been exempted from all logging due to its high recreational, scenic and scientific value. A board in the picnic area indicates the nearby walking-trails. The departure track, which takes in a lookout over Minyon Falls, follows the rim of the escarpment for about 2 km around to Quandong Falls. From this point you can return to the picnic area or continue on for another 2 km to the valley floor at the base of the falls. For more information check out http://www.nationalparks.nsw.gov.au/nightcap-national-park/minyon-falls-lookout/lookout.

* Prior to the arrival of Europeans the Widjabul people of the Bundjalung Aboriginal language group had lived in the area for tens of thousands of years.

* Early explorers and settlers described the district as "the Big Scrub" because of the dense sub-tropical rainforest.

* European settlement of the area began in the 1840s when timber cutters and cedar getters moved through the rainforest looking for timber to exploit.

* Little development occurred until 1869 when the whole district was subdivided.

* The first settler in the district was Thomas Robinson who purchased land near the present town site in 1881.

* Around the same time Thomas Skelton agitated for a school to be built at Byron Creek. The school was eventually built in 1884.

* The Byron Creek Post Office was opened in 1891 and a store appeared around the same time to serve people moving from the coast to the town of Clunes.

* By 1900 more than 99% of the Big Scrub had been cleared. It has been estimated that 7 million super feet of timber was removed from the Big Scrub in sixty years.

* In 1903 one hundred allotments of land were auctioned by local developer, Robert Campbell.

* A fire devastated many of the town's timber buildings in 1907. This same year the town became known as Bangalow.

* A third fire destroyed many buildings in 1930.

* The fourth fire in the town in 1939 led to insurance companies demanding that new buildings be constructed out of bricks rather than timber.

* Today it is a council requirement that for every house built around the town there must be 900 trees planted.

The Bangalow Heritage Walk is available for download at http://www.bookeasy.com.au/website/images/byron/bangalow%20historical%20walk.pdf. There is a useful local website - http://www.bangalow.com - which has detailed about accommodation, the Farmers Market and eating out. 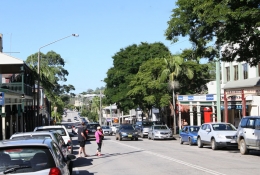 Looking down the main street of Bangalow 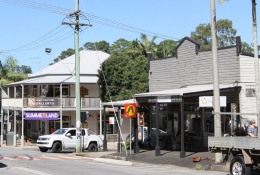 Shops with awnings on Byron Street. 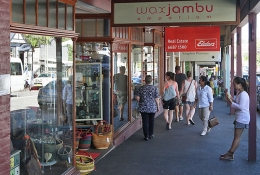 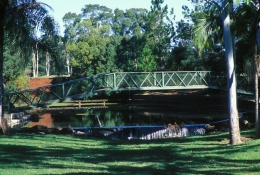 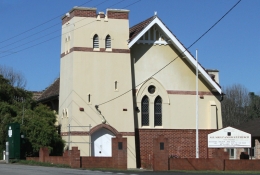 All Soul's Anglican Church at the bottom of Byron Street 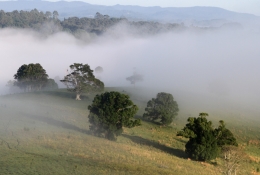 View across the hills from Bethany B&B near Bangalow.