Barellan is a small service town in the heart of the Riverina which is defined by its huge pub - the Commercial Hotel; its grain silos (for this is part of the rich Riverina cereal belt); and the fact that Evonne Cawley grew up here and is now honoured by a huge tennis racquet in the main street.

Barellan is located 521 km west of Sydney via the Hume Freeway to Yass and then through Temora.

It has been claimed that Barellan is a local Wiradjuri word meaning "the meeting of the waters".

The $45,000 Big Racquet honours Goolagong Cawley's remarkable achievements. It is an exact 20:1 scale replica of her famous Dunlop wooden racquet. There's an interesting report on the official unveiling of the racquet at http://news.brisbanetimes.com.au/breaking-news-sport/nsw-town-makes-a-racquet-for-goolagong-20091003-gh21.html

The Commercial Hotel
A true classic Australian rural hotel with a wide veranda. It is now totally out of proportion to the rest of the town being the largest building apart from the wheat silos. It was built in 1924.

Prior to European settlement the area around Barellan was inhabited by the Nari Nari people.

* Barellan came into existence in 1909 when the railway line arrived to service the surrounding wheat farmers who had managed to clear the surrounding mallee scrub. A post office was opened the following year.

* the town's greatest brush with fame was the international success of a local Wiradjuri girl, Evonne Goolagong (now Evonne Cawley), who was born in 1951 in Griffith and attended Barellan Primary School. She started playing tennis in Barellan before travelling to Sydney where she developed her tennis-playing skills with the well-known coach Vic Edwards while attending Willoughby Girls High School on Sydney's lower North Shore. Interestingly, given the level of racial prejudice in rural Australia at the time, Cawley's memories of Barellan are positive. She does not recall any racial prejudice but has observed that her family - her father was an itinerant shearer - were the only Aborigines in the town. It was not until she was an adult that she began to explore her Aboriginality. 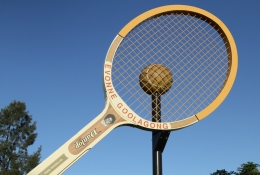 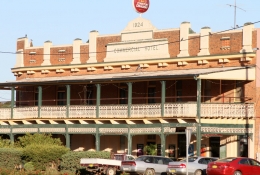 Commercial Hotel in the main street.