Bargo is now on the fringe of the Sydney suburban sprawl although the dense, urban development of the suburbs around Camden and Campbelltown is yet to arrive. The land is scrubby and poor and the housing is still largely undeveloped. The main attractions reflect its quasi-suburban status. It is still possible to have a 90ha flora and fauna reserve and it is still possible to have a sanctuary for dingoes.

Located 94 km south-west of Sydney via the South-Western Freeway and Hume Freeway. It is 370 m above sea-level.

In 1807 George Caley, who collected botanical specimens for Joseph Banks, wrote to his benefactor pointing out that his Aboriginal guide Mowattin, had told him of a large 'tract of forest land called Barago'. Bargo is probably a corruption of Barago. No one knows what the word meant in the local Aboriginal language but it is possibly 'place of cliffs' or 'thick bushland'.

Wirrimbirra Sanctuary
Located at 3105 Remembrance Drive 3.6 km north of Bargo, and struggling financially because it relies entirely on volunteers and donations, is Wirrimbirra Sanctuary. It is remarkably unpretentious and is geared to operate as a "sanctuary" for wombats, swamp wallabies, Eastern Grey kangaroos, emus, King parrots and sulphur crested cockatoos. The website explains: "Wirrimbirra is a flora & fauna sanctuary run entirely by volunteers who are dedicated to the preservation and conservation of Australia's unique flora and fauna. Wirrimbirra's main focus is environmental and wildlife education. It has over 200 acres of preserved native bushland - the unique flora of the remaining part of the area known as the 'Bargo Brush' in colonial times, but known and frequented, much longer by the traditional aboriginal peoples including the Tharawal." It is open from Tuesday to Sunday from 9.00 am - 4.00 pm. Check http://www.wirrimbirra.com.au/ for entry fees and other information.

Dingo Sanctuary
The Dingo Sanctuary, located next to the Wirrimbirra Sanctuary at 3105A Remembrance Drive, offers a rare opportunity to observe over 30 dingoes in a natural bush setting close to Sydney's CBD. Check out the website which points out that "At the Dingo Sanctuary, set in magical, open woodland-style, Australian native plant gardens, visitors are accompanied around the facility for hands-on introduction to the Dingoes by knowledgeable volunteers. The first thing which strikes many is the peace and calm. There are no jostling crowds. There is almost complete absence of noise from the 30 plus canine residents. Usually birds, and the gentle rustling of leaves in the trees soaring above, are all that is heard in the background as each Dingo is introduced with humorous anecdotes, illustrating aspects of their ecology and biology. There is no set commentary - visitors are encouraged to ask questions, and dialogue can range over a diversity of canine-related topics." The sanctuary is open seven days a week from 10.00 am - 2.00 pm or by appointment. There are names and numbers of contact people on the website. Check out http://www.dingosanctuarybargo.com.au.

Avon Dam
There are four dams in the Bargo Upper Nepean catchment region: the Avon Dam, Cataract Dam, Cordeaux Dam and Nepean Dam.
The Avon Dam was the third to be completed (1927) and is the largest of the Upper Nepean Dams. Work on the dam was started in 1921. "The curved dam wall was built using cyclopean masonry. This consisted of sandstone blocks, quarried from the site, fitted into an irregular pattern and packed with sandstone concrete. The blocks were lifted into place by electric powered cranes. The rock was quarried to make a deep cut through a ridge to a neighbouring creek to provide the dam’s spillway, which discharges into the Avon River 800 metres downstream. A 9.6 kilometre road was built from Bargo railway station to transport construction materials. The dam builders lived near the construction site in single-storey barracks for single men. Land was placed at the disposal of the married men who were assisted in constructing temporary houses for themselves and their families."
The dam wall which is 72 metres high and 223 metres long has been classified by the National Trust as a site of architectural importance. The distinctive stone gateways at either end of the dam wall were inspired by the popularity of Egyptian culture in the 1920s. Check out http://www.sca.nsw.gov.au/water/visit/avon-dam for more information.

Nepean Dam
The Nepean Dam was started in 1925 but stopped during the Great Depression and was only completed in 1935. It has a distinctive Art Deco feel. It is the smallest of the dams. The wall is 82 metres high and 216 metres across but it only has a capacity of 67,730 ml. Visitors can walk across the dam wall and enjoy a picnic in the grounds. For more detailed information check out http://www.sca.nsw.gov.au/water/visit/nepean-dam.

* Prior to European settlement the area around Bargo was occupied by the Dharawal Aborigines.

* An expedition came through the area in 1798. On that expedition John Price, a servant of Governor Hunter, recorded that he had seen a koala and a lyrebird. The expedition was led by ex-convict, John Wilson, and was carried out with the intention of providing a very negative report of the area because convicts were escaping and heading south in the mistaken belief that China was only 150 miles away.

* In a letter to Banks on 25 September 1807 Caley recorded that his Aboriginal guide, Mowattin, told him of a large "tract of forest land called Barago".

* In an entry in his diary in 1815 Governor Macquarie refers to the district south of Stonequarry Creek as 'Great Barago'. During this year John Oxley took cattle into the area looking for good pasture.

* Between 1817 and 1819 Charles Throsby explored the area usually in the company of Hamilton Hume and Joseph Wild.

* By the 1860s Bargo had a reputation as one of the worst sections of road with one contemporary report recording "The whole road was a nightmare with its succession of bogs where bullock wagons sank to their axles. Drivers cut saplings to corduroy sections of the road and threw stones into bogholes. Teams on unbogged wagons were attached to teams on bogged vehicles to help pull them free; sometimes only to see them sink again!"

* In 1866 in the Bargo Brush an escaped convict named James Crookwell shot and killed Constable Raymond.

* In 1919 the Bargo Railway Station was opened.

The Wollondilly Tourism Association website - http://www.visitwollondilly.com.au/towns_bargo.php - has useful information on the town. 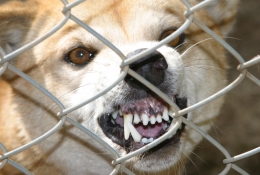 Not something to be patted - a dingo snarls from behind the fence at the Dingo Sanctuary. 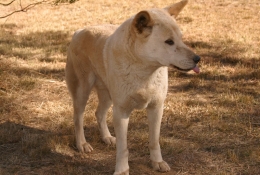 Looking like a benign domestic dog, a dingo at the Dingo Sanctuary. 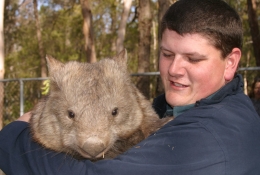 A wombat and his handler at Wirrimbirra Sanctuary.