Barmedman is a small rural service town in the heart of the Riverina's wheat and sheep belt. Not surprisingly its history, apart from a brief period when gold was mined, has been tied to the large properties that surround it. Today it is little more than a main street with a single attraction: the Mineral Swimming Pool. The district's economic focus is summed up by the two large wheat silos in town.

Barmedman is a small rural town located 460 km west of Sydney and approximately halfway between Temora and West Wyalong.

The popular interpretation of the town's name is that it is a Wiradjuri word meaning 'long water'.

Barmedman Mineral Pool
Whether it is the largest mineral pool in the world can be debated. What can't be debated is that the popular Barmedman Mineral Swimming Pool certainly is much larger than an Olympic-sized swimming pool and, at 48 m wide by 57 m long it is larger than the other main contender the Glenwood Hot Springs Pool which is 122m long and only 20m wide. The pool occurred as a result of the flooding of the Barmedman goldmine by an underground stream in the 1880s. It became popular with the locals in the 1950s. Before 1960 it was simply a muddy pool. Then it was concreted and in 2011-2012 it had a major upgrade courtesy of the Bland Council and local volunteers. The result is a spectacular pool with a large shaded area and a shallow area of non-swimmers. It is now located in  a four-hectare reserve with camping and barbecue facilities. Some people claim it has therapeutic healing properties as a result of the high mineral content.

* Prior to European settlement the district around Barmedman was part of the vast lands of central NSW occupied by the Wiradjuri people. There is a record of an early settler witnessing a particularly bitter battle between two groups of Aborigines with a single spear passing through two men and killing them both. There is also a claim of one man being decapitated by a boomerang. No one knows what the battle was about.

* The explorer John Oxley travelled through the area in 1817 and was unimpressed. He described the Riverine plain around Barmedman as 'these desolate areas [that] would never again be visited by civilised man'. It is a comment on the blindness to Aboriginal culture of the early explorers that while dismissing the land as desolate Oxley did describe the Wiradjuri as 'strong and healthy', noted they carried stone axes, spears and woomeras, and pointed out that they wore possum skin coats as it was winter.

* The colony's Surveyor-general, Thomas Mitchell, travelled through the area in 1827 and with little imagination named it 'The Levels'. Yes it is very flat.

* Squatters arrived in the district in 1833. They called it 'The Blands' which led to the name - Bland Shire. It is significant that the barren plains were, at that time, covered with grey and yellow box, belah and bull oak, ironbark, cypress pine, acacias, quandongs, melaleucas and scrubby grasses. The task of clearing must have been enormous as the first major property, named Barmedman, covered 35,840 acres (14,504 ha) was occupied by John Cartwright who ran only 53 horses and 877 cattle.

* Gold was discovered near the town in 1872. It was not a substantial find and by 1882, when the district's population had grown to 365, there were only about 150 miners. Only 3.3 kg of gold was found in 1882. This rose to 144.3 kg in 1883. Mining continued until the early twentieth century with companies bringing batteries and heavy equipment into the area.

A truly local website with lots of information about the town (and lots of praise and enthusiasm) is http://blandshire.nsw.gov.au/villages/barmedman 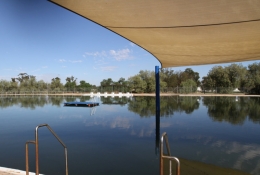