Barraba is a rural service centre on the Manilla River with the Nandewar Ranges to the west, the Horton Valley to the north-west, and undulating slopes and tablelands to the south-east and north. The district is mainly a cropping area together with sheep and cattle grazing.  The main appeal of the area lies in its long history as a mining town and the attractive and dramatic national parks which surround it.

Barraba is located 476 km north of Sydney and 90 km north of Tamworth on the Fossickers Way. It is 500 m above sea-level.

So many town names with Aboriginal origins seem to be either  "a meeting place" or something connected with meetings and campsites. It is probable that Barraba means "a camp by the river" in the language of the local Aborigines but no one is sure. It could also mean "place of the yellow-jacket trees".

Heritage Buildings - Queen Street
There is a pleasant walk down Queen Street, the town's main street. Barraba is a good example of a "veranda town" with many buildings, dating from the turn of the century, still having awnings to protect from the heat of the day. The buildings include the Barraba Information Centre which is located in P. Jacobs Buildings, an Edwardian structure which was once a general store and garage. It was built in 1908. Nearby is Treloar's Building which was completed in 1907. The modest Court House was erected in 1881 with additions in 1907 and 1936. Next door is the National Australia Bank, a building constructed in 1925 by the CBC which had bought the block of land for £150 in 1898. The Dean and Smith Stores, with their old-fashioned shop fronts, were built in 1900 and are now the IGA supermarket. The Commercial Hotel (an old Cobb & Co changing station) was built in 1890 and still has some impressive iron lace work on the balcony. The Clifton Hall dates from 1921. The Central Hotel dates from about 1908. The prominent clock tower was erected in 1924 in memory of local men killed in World War I. The Methodist (now Uniting) Church at the Edwards Street corner was erected in 1898-99.

St Laurence's Church of England
The first Anglican church in Barraba, St Laurence’s Church of England, was built in 1874-1875 on the corner of Alice and Queen Streets. It was designed by the notable colonial architect John Horbury Hunt, who was responsible for five country churches in the Diocese of Armidale, (Barraba, Bundarra, Inverell, Ollera and Tingha), in addition to buildings such as St Peter’s Cathedral in Armidale. The original St Laurence’s Church was demolished in 1906, apparently because it was regarded as unsafe due to flood damage. However there is evidence that the building was the victim of economics. It stood on a commercially valuable town site and for social reasons the congregation preferred to build a more modern church on this site in Maude Street. The parishioners went on to build a new, larger church of locally-made bricks next to the rebuilt church, on the corner of Maude and Fitzroy Streets. The building was consecrated on 22 March 1909. Once the new church was completed, the old building (i.e. the town's second Church of England) became the church hall. St Laurence’s Church of England is one of the town's more notable buildings, with a fine nineteenth century pipe organ and a new vestry, a memorial to all those who had served in the two World Wars. The vestry was completed and dedicated in June 1955.

Bird Routes of the Barraba District
A relatively recent initiative the bird routes project has established Barraba as a premier location for bird watching. Keen birdwatchers now travel to Barraba from around the globe for the chance of sighting rare and endangered species such as the Regent Honeyeater and the turquoise parrot. A brochure available at the Visitor Information Centre provides a map of the bird watching routes, together with a list of the 190 bird species seen in the region. Popular bird watching sites include the 500 ha Woodsreef Reserve and the Nangarah bird route east of Barraba, the Borah and Tarpoly Travelling Stock Reserves to the south-west and the Bells Mountain and Cobbadah to Upper Horton bird routes to the north. Check out http://www.warialdansw.com.au/wp-content/uploads/2014/06/Warialda-bird-brochure.pdf for a downloadable brochure on the routes in the area.

Adams Lookout
Located 5 km north-east of Barraba is Adams Lookout which was named after Alfred Adams who purchased Barraba Station in 1850. It offers excellent views over Barraba and is a pleasant place for a picnic. It is possible to see Mount Kaputar to the west. To access the lookout turn right off Fossickers Way at the signpost, 3 km north of Barraba. This is the access road to the old Woodsreef mining site.

Woodsreef State Conservation Area and Ironbark Creek
Located 18 km from Barraba on the Bundarra-Barraba Road (the turnoff lies north of Barraba on the Cobbadah Road) are Woodsreef and the Ironbark Creek picnicking and fossicking area. Gold was discovered at Woodsreef in the late 1850s and a thriving village soon developed with a post office, stores and school, but it virtually disappeared when most miners left in the late 1860s. A small number, employed by larger companies, stayed on. Asbestos was mined here from 1919-1923 and a large open-cut asbestos mine opened at Woodsreef in 1972, providing local employment, though it closed down in the 1980s. Today there are some remnants of those various phases of the village's existence, such as old copper, gold and asbestos workings, a huge hole in the ground and an old building, the abandoned asbestos processor which dates from 1983. There are only a few buildings left of the village. A tiny wooden structure was built around 1895 and used as a post office. The little wooden church dates from 1923. Gold, agate, petrified and opalised wood, and jasper have been found in the area..

Cunningham Memorial
The Cunningham Memorial, a roadside obelisk, is located 5 km west on the Trevallyn Road. It marks the site where, on 17 May 1827, the botanist and explorer Allan Cunningham crossed the Manilla River, which he called Buddle's River. He was the first European to pass through the area. It was placed at the spot by the Nandewar Historical Society.

Horton Falls National Park
The Horton Falls National Park, covering 260 ha, was created in 2005. It is located between Barraba and Mount Kaputar National Park some 38 km west of Barraba. There are a number of bushwalking trails but the great attraction are the Horton River Falls which plunge 83 metres to the valley floor ...  but only after decent rains. There are picnic and barbecue facilities, bushcamping and bushwalks, including a steep and difficult trail almost to the bottom of the gorge (over one hour return). It is possible to walk to the top of the falls from the car park in around 10 minutes. There are spectacular views during wet periods. There are two excellent vantage points to see the falls. There are also picnic and barbecue facilities available plus there are bush camping areas. For more information check out http://www.nationalparks.nsw.gov.au/visit-a-park/parks/Horton-Falls-National-Park.

Split Rock Dam
Located on the Manilla River, the Split Rock Dam was built between 1984-1988 and can store 397,000 megalitres. It provides camping and recreation facilities, including boat ramps, barbecues and picnic areas. It is a popular location for fishing, boating, swimming and water skiing. Head south towards Manilla for 30 km, turn right at the clearly sign posted turnoff, and it is another 8 km.

* Prior to occupation by Europeans the area was occupied by the Kamilaroi Aborigines.

* In 1827 Allan Cunningham crossed the Manilla River a little to the west of the present townsite. He named it Buddle's Creek.

* By the 1820s squatters were moving into the Liverpool plains.

* A John Hoskisson had taken up "Barraba Plains" station by 1837.

* In the mid-1840s Scotsman John McKid opened the first store on the future townsite.

* The town was surveyed in 1852 by Assistant Surveyor J.T. Gorman.

* In the 1850s gold was discovered in the area at Woodsreef, Ironbark Creek, Barrack Creek and Crow Mountain. Woodsreef became an important mining village for a decade but virtually disappeared when the gold was exhausted in the late 1860s.

* In 1861 the first school was opened at Barraba in rented premises.

* The first Anglican church, St Laurence's Church of England, was erected in 1874-75. It was designed by John Horbury Hunt who had designed St Peter's Cathedral in Armidale.

* A public school was opened in 1874. It had accommodation for 75 students.

* The first bank, the CBC, was established in 1876. That year also saw the sale of town lots.

* Barraba was officially proclaimed a town in 1885.

* Another mining boom occurred when copper was discovered at Gulf Creek in 1889.

* The first mine at Gulf Creek was established in 1892.

* By 1900 the gold mine at Crow Mountain was producing an ounce of gold for every ton crushed.

* At its peak, in 1901, 200 men were employed in conjunction with the Gulf Creek copper mine which was one of the largest in the state. A prosperous village developed with bark-hut residences, stores, a school, a hotel and a post office.

* Barraba became a municipality in 1906.

* The railway arrived from Tamworth and Manilla in 1908.

* In 1924 the town's distinctive Memorial Clock was erected to commemorate local men killed in World War I. Of the 186 who enrolled, 40 were killed.

* In 1965 three huge wheat silos were built in the town. Each stored 100,000 bushels. They continued to operate until the 1980s when the rail line was closed down.

* It was not until 1972 that a large open-cut asbestos mine was opened at Woodsreef. It closed down in 1983. 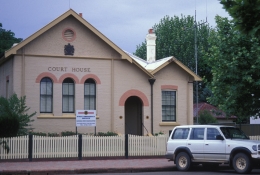 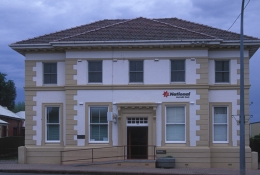 The NAB Bank, originally the CBC and built in 1925. 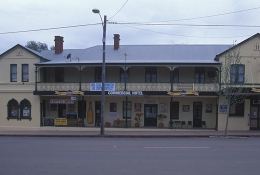 The Commercial Hotel (1890) once a Cobb & Co changing station. 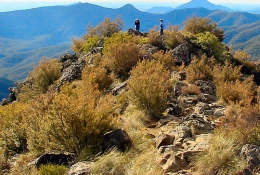 The viewing point at the top of Mount Kaputar. 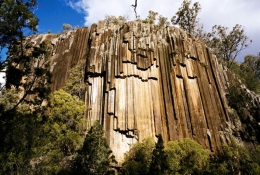 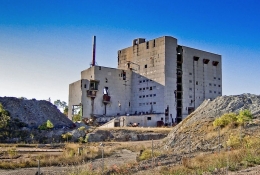