The Barrington Tops, officially listed as a World Heritage Area since 1986, are a particularly beautiful section of the Great Dividing Range. Now covered by the 95,000 ha Barrington Tops National Park the "tops" lie to the west of Gloucester, east of Scone and to the north of Dungog. The "tops" are home to more than 50 species of mammals, 278 bird species, 42 reptile species and 18 frog species. Given their elevation the "tops" can experience dramatic changes in the weather with a sunny day turning to snowstorms within hours. The area is part of an ancient volcano and is characterised by pockets of subtropical rainforest, sub-alpine wetlands, snow gum woodlands and it is home to the unique Antarctic beech rainforest. The topography ranges from steep ridges which rise 1500 metres to intimate valleys and waterfalls.

Barrington Tops are located approximately 320 km north of Sydney via Gloucester and 240 km via Dungog.

2. From Dungog - there are a number of access points to the walks in the National Park (a) Chichester Dam Road up to Jerusalem Creek (b) Salisbury Road to Williams River and Lagoon Pinch and (c) the Salisbury Road and Mt Allyn Road to Burraga Swamp.

There are a number of brochures provided by the National Parks and Wildlife Service and when planning a visit they are essential. A good starting point is the website - https://www.nationalparks.nsw.gov.au/visit-a-park/parks/barrington-tops-national-park which provides detailed information on 37 activities within the park. Yes, it really has that many walks, lookouts, picnic locations, campgrounds and drives. The printed brochure Visitor Guide - Barrington Tops National Park lists a total of 24 tracks and trails in the park.

1. From Gloucester
This 148 km drive - with a substantial stretch on dirt road - has a number of places of interest along the way. Here are the highlights as the road traverses the "tops" from Gloucester.

* Honeysuckle Picnic Area and Forest Track
This is an ideal introduction to the unique rainforest of the Barrington Tops plateau. The National Parks website describes the short, 1 km loop walk (which will take less than half an hour) as an opportunity to experience "magnificent Antarctic beech forest with thickets of soft tree ferns, have a look for the beech orchid that grows in its upper branches. The moss covered trunks are a spectacular sight in the misty rain. Rainforest gives way to open forests of brown barrel with an understory of tall mountain banksia, also known as honeysuckle." Check out https://www.nationalparks.nsw.gov.au/things-to-do/walking-tracks/honeysuckle-forest-track for more information.

* Dilgry Circle
Located 54 km from Gloucester and near the Honeysuckle Picnic Area, and heading off to the north, is a 4WD track known as the Dilgry Circle. It is known to most visitors because of the unusual granite formation which looks uncannily like a giant penis. Ask at Gloucester Visitor Information for specific directions.

* Thunderbolt's Lookout
Thunderbolt's Lookout is clearly marked on the Barrington Tops Forest Road and is an easy 400 m flat walk to a lookout point which has a panoramic view across the wilderness of the "tops". It is claimed that it was once a popular lookout for bushrangers. National Parks describes the short walk and the lookout as "Passing through a majestic stand of Antarctic beech trees, where moss carpets the forest floor, look for delicate orchids high in the branches as you make your way to the lookout. Soak in the spectacular vista of the deep valley leading to Moppy River below and Mount Carson beyond. Wedge-tailed eagles often circle in the skies above, looking for prey." Check out https://www.nationalparks.nsw.gov.au/things-to-do/lookouts/thunderbolts-lookout-attraction for more details.

* Devils Hole Picnic area and Lookout
Located west of Thunderbolt's Lookout on the Barrington Tops Forest Road (around 60 km from Gloucester) this campground and picnic area is located at 1,400 m above sea level in sub-alpine country noted for its snow gums, cold climate woodlands and wetlands. Only 300 metres from the picnic area is the lookout described by National Parks as having "The snow-grassed montane woodland of the gentle Barrington plateau stretches behind, while dense forests, wild gorges, and ridges of the Barrington wilderness lie below. On a clear day, the view extends to the coast, over 90 km to the east." Check out https://www.nationalparks.nsw.gov.au/things-to-do/walking-tracks/devils-hole-lookout-walk-and-picnic-area for more details.

* Gummi Falls
The 4WD - mountain bike track from the Barrington Tops Forest Road heads north from Devils Hole to Gummi Falls, a beautiful small falls, which lie on the northern border of the park. This is a remote sub-alpine camping spot which is known as an ideal place to observe kangaroos, wombats, the long-nosed potaroo, the spotted-tailed quoll and greater gliders. Check out https://www.nationalparks.nsw.gov.au/camping-and-accommodation/campgrounds/gummi-falls-campground for more information.

* Polblue Swamp Track
An important stopping point on the Barrington Tops Forest Road, the Polblue Swamp is about 70 km from Gloucester and is edged by black sally trees, snow gums, mountain gums and scribbly gums. The swamp itself is covered by grasses, moss and sedges. If there has been rain it is possible to see wild orchids and in the morning and evening both wombats and kangaroos are common around the edges of the swamp. The easy, flat walk is a 3 km loop which can be done in 30 minutes. Check https://www.nationalparks.nsw.gov.au/things-to-do/walking-tracks/polblue-swamp-track for more details.

* Barrington Trail
Running to the south from from the Barrington Tops Forest Road just beyond Polblue Swamp, the Barrington Trail is a 15 km, 4WD only (although it is popular with mountain bike enthusiasts) track which is open in the summer months between October and May. It provides access to Little Murray Campground (5 km from the main road); Junction Pools campground (12.5 km) and Mount Barrington picnic area (15 km). It is also the access point to the Aeroplane Hill walking track and the Careys Peak walking track. For detailed information check out https://www.nationalparks.nsw.gov.au/things-to-do/4wd-touring-routes/barrington-trail.

* Polblue Falls
Accessed from Horse Swamp (a campsite accessible by 4WD) the falls can be seen from a short, 500 m return walk from the Polblue Falls picnic area.

* Dingo Gate and the Road Beyond
After driving across the "tops" it is strange to stop and have to open a gate but it serves as an excellent break as this is the point where the sub-alpine forests of the "tops" give way to the cleared valleys which drop dramatically down to Moonan Flats and the valley of the Hunter River. The road can be quite dangerous as the hills have a tendency to drop rocks onto the road. It needs to be driven with care.

* Chichester Dam Road leading to Chichester Dam and Jerusalem Creek Picnic Area and Jerusalem Creek Trail
Chichester Dam
Chichester Dam was built between 1916 and 1923 to supplement water supplies from the Walka Waterworks near Maitland. It has a capacity of 22,750 megalitres, a maximum depth of 37 m and it covers 184 ha. The flooded area was once a goldmining town named Wangat. There is a small parking area opposite the dam wall. The wall is 254 m long and rises 41 m above the water, offering superb views of the reservoir. Just past the wall is a walking trail off to the left.

Jerusalem Creek Trail
The Jerusalem Creek Trail which heads north from the Jerusalem Creek Picnic Area (2 km return - 60-90 minutes) makes its way from an area of dry eucalypt forest down into a gully where the ecosystem undergoes a transition to moist sclerophyll forest characterised by Sydney blue gums and tallowwoods. The track passes waterfalls and winds beside the Jerusalem Creek. There are plenty of elkhorns and other epiphytes, mosses, lichens, vines and ferns along the way. There are axe-cut logs from pre-chainsaw days, an old and narrow bullock track from pre-bulldozer days  and a crop of blue gum cultivated by ring barking which destroys the canopy, allowing light to reach the forest floor. This, in turn, encourages the growth of seedlings and hence regeneration. For more information check out http://www.nationalparks.nsw.gov.au/things-to-do/walking-tracks/jerusalem-creek-trail.

* Salisbury Road leading to Williams River Picnic Area, Blue Gum Loop Trail and Williams Top Lookout
The Williams River Picnic Area has picnic and barbecue facilities, toilets, an information board and the pleasant, easy-going 3.5 km Blue Gum Loop Trail. It is also the southern end of the Rocky Crossing Trail (16 km return).
The National Parks website describes the walk: "Blue Gum loop trail crosses the magnificent Williams River, winding past cascades, eucalypts, and rainforest before joining the southern end of Rocky Crossing walk. While crossing a high steel span bridge, stop to take in the beautiful views of the river. Passing through vigorous young Sydney blue gums, you’ll see signs of past logging along the track. Further on, a short detour leads to scenic Fern Creek cascades. Back across the river, the track enters an enchanting patch of ancient rainforest. Be sure to look high in the moss-covered branches for birds nest ferns and orchids. Nearing the end of the path, huge Sydney blue gums soar above, with several short detours leading to secluded river spots, such as Crystal Pools. Round off your walk with a refreshing swim." The dirt road to the left of the Picnic Area is Williams Top Road, will enters Chichester State Forest. After 3.5 km there is a sharp left which leads to Williams Top Lookout. There is a picnic-barbecue area and fine views over the Williams Valley.

* Salisbury Road leading to Rocky Crossing, Careys Peak Lookout and Lagoon Pinch
At Mount Barrington Picnic Area there is a 14 km, one-way walk to Careys Peak Lookout. It is a long, steep climb involving almost vertical sections and it links up with the Barrington Tops Walking Trails and Gloucester Tops for 2-3 day treks. For detailed information check out https://www.nationalparks.nsw.gov.au/things-to-do/walking-tracks/careys-peak-walking-track. From Lagoon Pinch Picnic Area there is the interesting Rocky Crossing Walk - a 16 km return walk which will take around six hours.

* Salisbury Road and Mount Allyn Road to Burraga Swamp
The panoramic view from Mt Allyn Lookout (1143 m above sea-level) is one of the most impressive in the whole of the National Park. The surrounding mountains appear bathed in a shimmering blue eucalypt haze. A walking track heads off and joins with the Burraga Swamp Walk which is a 2 km, 30 minute walk. The National Parks website explains: "Today, the delicate grasses and sedges of Burraga Swamp are in sharp contrast to the ancient rainforest of Antarctic beech around it. The organic matter left here over centuries is valuable historical evidence to help us understand and learn about past climate and vegetation. The walking track itself climbs gently through the beech forest, across a small saddle, and down to the southern edge of the swamp." For more detailed information and a useful map check out http://www.nationalparks.nsw.gov.au/things-to-do/walking-tracks/burraga-swamp-walking-track.

* By 1812 settlers were moving into the Hunter Valley

* In 1840 the Australian Agricultural Company was granted 1 million acres from Port Stephens to the Manning River. The area around Barrington Tops was known as the Back Country.

* By the 1850s cedar cutters had moved into the area seeking the rich timber.

* It is believed that Captain Thunderbolt (Fred Ward) hid out on Barrington Tops in the 1860s.

* In 1945 a De Havilland Mosquito crashed near the Tops. The wreckage was not found until 1946.

* In 1954 electricity was connected to the Barrington Guest House.

* In 1986 the National Park became part of the World Heritage Gondwana Rainforests of Australia.

* In 2007 Barrington Tops National Park was added to the Australian National Heritage List.

The National Parks website is full of useful information. Check out https://www.nationalparks.nsw.gov.au/visit-a-park/parks/barrington-tops-national-park. There is also a photo-rich site which is worth checking out https://barringtoncoast.com.au/destinations/barrington-tops. 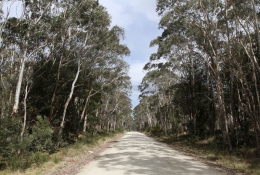 Although much of the road across the Tops is unsealed it is a good quality dirt road. 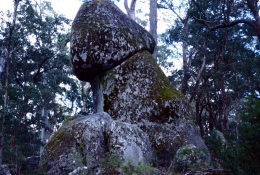 The 'famous' Penis Rock on the Dilgry Circle. 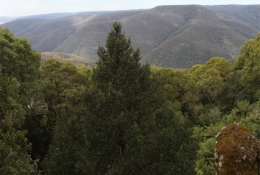 The view from Thunderbolt's Lookout across the Barrington River Valley. 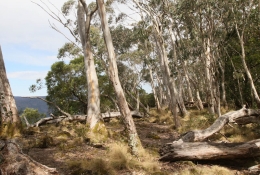 The bushland on the Barrington Tops near Thunderbolt's Lookout 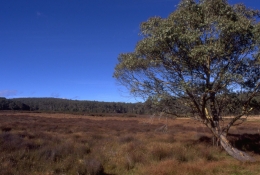 Polblue Swamp on the road between Gloucester and Scone 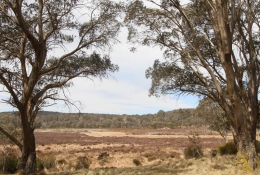 After lengthy dry periods Polblue Swamp can dry up completely.