Tiny, historic town on the border between New South Wales and Queensland.

Before Federation, when the borders between states were controlled by customs officers, places like Barringun, which is located on the New South Wales-Queensland border 111 km north of Bourke and 146 km south of Cunnamulla, were important stopping points with bonded warehouses, hotels and shops servicing travellers crossing from one state to the other. Once Federation occurred and the state borders were removed the towns started to die. The town that was once a stopover point for shearers, drovers, mailmen, swaggies, labourers, adventurers and Cobb & Co coaches became a sleepy village as cars roared through. Today the charm of Barringun is reduced to the hotel, a remnant of a bygone era.

Barringun is located 873 km north west of Sydney near the NSW-Queensland border. It lies 111 km north of Burke and 146 km south of Cunnamulla.

It has been suggested that Barringun, in the language of the Barranbinya Aborigines, means 'fish die in water' which is plausible given the harshness of the climate in the region.

Barringun Hotel
There isn't really anything to do in Barringun because it is nothing more than a pub on the Queensland - New South Wales border. So, have a drink, talk to the few people in the bar, and hope that they have a few funny stories to tell you about life in this lonely outpost where the only visitors are those who are driving through. Mary Crawley, now in her 80s, is the licensee of the pub and has been since she got her Hoteliers License in 1977.
In the Outback magazine in 2004 the Bourke poet, Andrew Hull, wrote of the hotel: "The guest register at Tattersalls Hotel, Barringun, on the New South Wales- Queensland border, makes for good reading. If you care to take a look, you will note names that include the famous, like Russell Crowe, the semi–famous, like Simon Westaway, and a host of everyday travellers. All are linked by the uniform nature of their comments, as almost all mention hospitality, with superlatives like 'wonderful', 'marvellous', 'fantastic' and 'inspiring'. More remarkable still is the fact that the vast majority of comments mention family, and use adjectives like 'warm', 'friendly', 'welcoming' and 'intelligent'."
In 2017 it was reported that Mary Crawley, aged 93, had decided to retire and sell the pub and the 87 ha around it. The report in the Sydney Morning Herald noted: "The woman believed to be Australia’s oldest publican has announced plans to sell her hotel – the “last pub in New South Wales” – and retire after running it for 40 years. Mary Crawley, 93, has been behind the bar at the Tattersalls Hotel in Barringun, a tiny town one kilometre from the Queensland border, since 1977. The remote pub, about 130 kilometres north of Bourke, plays host to a steady stream of travellers from both sides of the border. The sale is being run by McKimm Real Estate director Adam Crawley, who is Mary’s grandson and who grew up in the hotel.
“It was a pretty unique experience growing up in a pub like that, hanging around with a lot of shearing teams and truck drivers. You get some pretty interesting yarns out of them,” Mr Crawley said.
“My grandparents bought it in 1977 and raised the last of their kids there. A myriad of the grandkids have lived there over the years. It was a family home as well as a hotel.”

* Prior to European settlement people from the Barranbinya Aboriginal language group moved through the area.

* The first European to travel through the area was Charles Sturt who, in 1828 accompanied by Hamilton Hume, reached the Darling River about 70 km south of Barringun.

* In 1835 Sir Thomas Mitchell travelled down the Darling although he did not get as far north as Barringun.

* As a result of these early explorers pastoralists moved into the area and slowly it began to take up land.

* In 1859 Captain W. R. Randall sailed the Gemini up the Darling River from South Australia to Bourke. Immediately Bourke became the transport centre for the whole of south west Queensland and western New South Wales and towns like Barringun became conduits for the wool from western Queensland which was taken by bullock teams to the Bourke Port.

* In 1889 the poet Will Ogilvie travelled to Barringun in a Cobb & Co coach. He used to drink at the Tattersall Hotel with Breaker Morant.

* By 1894, only six years before Federation, the Australian Handbook could report that Barringun was: "A border township with post, telegraph, money order station and Government Savings Bank ... Mode of conveyance per coach to Bourke. 90 miles thence per rail. There are two hotels and a customs station on the Queensland side of the border. The buildings on the New South Wales side comprise a bonded warehouse, post and telegraph offices, two hotels (Royal Mail and Queensland), a branch of the Commercial Bank, a brewery, two butcher's shops, a few private cottages, a court house and gaol and a public school. Average attendance - 30. Population about 180."

* Today the town has one pub and a population of less than ten. The Tattersalls Hotel, the correct name for the Barringun Pub, stands on the western side of the highway.

There is no accommodation in Barringun.

There is no website providing information about the town. 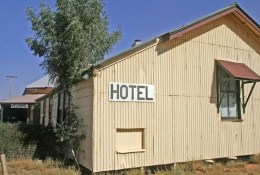 The pub at Barringun. 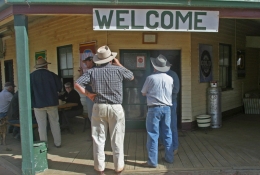 Having a drink on the veranda outside the Barringun Pub. 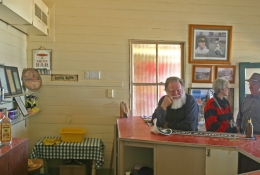 Inside the bar of the Barringun Pub. 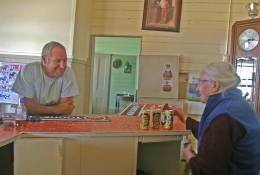 The poet, Will Ogilvie, is listed as a non-payer of the annual subscription to the Barringun Jockey Club. Records held at the pub.