One pub settlement made infamous by the Peter Falconio murder.

For most of its history Barrow Creek has been an isolated and tiny outpost on the Stuart Highway north of Alice Springs. Then, on 14 July 2001, it became a vital part of one of the Australian outback's most horrific and mystifying crimes. On the night of 14 July, Bradley John Murdoch stopped a VW Kombi van driven by English traveller, Peter Falconio, and persuaded Falconio to leave the vehicle, shot him, tied up Falconio's girlfriend Joanne Lees who, miraculously, managed to escape, hide in the scrub along the highway, and was eventually picked up by a truck driver who took her 13 km south to the Barrow Creek pub where the police were alerted. Stop, have a drink at the pub (a true outback experience), and think of the bones of Peter Falconio now lying somewhere in the vastness of the Australian outback. If you want to be terrified, watch Wolf Creek - obviously inspired by the crime.

Barrow Creek is a tiny settlement on the Stuart Highway 1211 km south of Darwin and 286 km north of Alice Springs.

Barrow Creek was named after the John Henry Barrow who, at the time, was a member of the South Australian parliament. He had migrated to South Australia in 1853.

The Pub
One of the enduring joys of travelling the Stuart Highway is the remarkable outback pubs which line the route. The pub (now a kind of combined roadhouse, pub and caravan park) was built in 1926 by Joe Kilgarriff. Step inside and you can still see, amidst the memorabilia, the original bar and the tin ceiling. The beer is still stored in the original underground cellar. In recent times demountable accommodation and a caravan park have been added. At any given time the publican and his staff represent the totality of the Barrow Creek population. It can rise to 11 or 12 and drop back to 4.

The Graves
In 1874, after the Overland Telegraph was being officially opened and when a local police station had been established at Barrow Creek, the local Kaytetye Aborigines attacked the small community and two men, John Franks and James L Stapleton, were killed. No one is certain what prompted the attack (possibly the issue of treatment of women or of water supply) but the graves of Franks and Stapleton remain at Barrow Creek. They are marked by a stone wall around the headstones.

On a lighter note there is another grave - that of the 'Mayor of Barrow Creek' a man named Tom Roberts who arrived at Barrow Creek in 1952 (he was working for the Postmaster General's Department) and stayed until 1986 when he went to live in Charters Towers. He always said he wanted to be buried in Barrow Creek so when he died on 8 February 1988 his ashes were returned, a stone was removed from the Telegraph Station, and he was placed next to Franks and Stapleton on the north side of the Station.

Barrow Creek is the land of the Kaytetye Aborigines who have lived in the region for tens of thousands of years.

* In 1860, on his way across the continent, John McDouall Stuart passed by Barrow Creek on 13 July 1860 and named the creek after John Henry Barrow, a preacher, journalist and politician who had arrived in South Australia in 1853. It has been claimed that Stuart was an irregular attendant at Barrow's church but more significantly at the time of the naming of the creek, Barrow was a South Australian parliamentarian.

* The European settlement of Barrow Creek occurred in 1872 with the arrival of the Overland Telegraph. The stone Telegraph Station, complete with tuck pointing on the walls, was built that year. It suggests permanence. Today it can be inspected. The keys are held at the pub.

* On 27 February 1874 the local Aborigines attacked the Telegraph Station and Stapleton and Franks (one was the stationmaster and the other was the linesman) were killed. When the station had been built it was assumed that if an attack occurred it would come from the west. In reality the Kaytetye Aborigines attacked from the hills at the east and neither Stapleton nor Franks could get to the main courtyard. As a result of the killings major reprisals occurred and it is estimated that some 50 or 60 Aborigines (they almost certainly had nothing to do with the attack) were killed at Skull Creek. This is known as the Skull Creek massacre.

* So unreliable was the water supply at Barrow Creek that some 20 years after the Telegraph Station was built there was talk of moving it 40 km north towards the Taylor Creek where there was more reliable ground water.

* In 1928 Barrow Creek was the scene of the last major massacre of Aborigines in Australia when Fred Brooks, an old dingo trapper, was killed on Coniston Station. The local Mounted Constable William George Murray, who was operating out of Ti Tree, formed a 'posse' and killed an estimated 70 Aborigines. Murray appeared in court in Darwin but was exonerated of any crime. A detailed account of the events is in my book Blood on the Wattle.

* Today there are two Aboriginal communities in the area - Tara is 12 km northeast and home to about 80 people and Pmatajunata on Stirling Station is a settlement of around 120 residents. 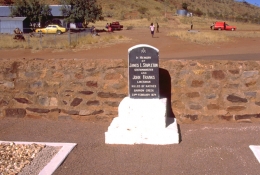 The grave of Stapleton and Franks (pic. circa 1988) 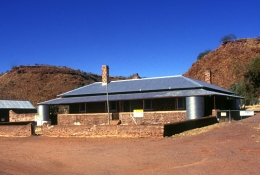