Historically Barwon Heads was a sleepy seaside holiday destination which was popular with the residents of Geelong and Melbourne. When, in 1998, it was used as the location for the hugely successful ABC-TV series SeaChange, which starred Sigrid Thornton and David Wenham, it became a destination for people dreaming of a "seachange" and holiday makers eager to explore the locations used in the television series. Barwon Heads is separated from its twin town, Ocean Grove, by the Barwon River which connects the ocean to Lake Connewarre, now part of the Lake Connewarre Wildlife Reserve. Both towns have ocean beaches and safe family beaches along the riverbank. Barwon Heads is quieter and smaller than Ocean Grove.

Barwon Heads, a seaside holiday destination on the Bellarine Peninsula, is located 97 km south-west of Melbourne and 24 km south-east of Geelong.

Although Barwon sounds English it is actually a corruption of “Barra Warre N Yallok”, an expression from the Wathawurung people who lived in the area before European settlement. The accepted translation is “the great river which flows from the uplands to the sea”. The river was named Barwon by John Helder Wedge, a surveyor, in 1938.

Barwon River Beaches
Safe swimming can be enjoyed along the long sandy river foreshore, known as Barwon River Beach, which is located at the river mouth. The excellent Beach Safe site notes: "The tip of the head is called Point Flinders, which is a 20 m high sand dune surrounded by rock platforms and reefs. In behind the point, a narrow sand beach runs up along the river to the bridge ... This beach is a popular spot for people from the caravan park and those looking for calmer waters." For more detailed information check out https://beachsafe.org.au/beach/vic/greater-geelong/barwon-heads/barwon-river.

Thirteenth Beach
Located beside Thirteenth Beach Road, Thirteenth Beach - it was named after the 13th Fairway on the local golf course - is considered one of Victoria's most scenic beaches. It runs from the Barwon Bluff Marine Sanctuary for 4.5 km along the coast and is edged by rolling, coastal hills and sand dunes with superb views across Bass Strait. The excellent Beach Safe site notes: "The beach receives waves averaging 1.5 m, is moderately sloping and is fronted by a single bar, dominated by rips every 250 m. The beach is backed by a vegetated foredune for most of its length, and the Barwon Heads to Torquay Road. The best access is provided at the surf lifesaving club, with additional car parks and access tracks located along the road. The surf club, founded in 1961, is the only development on what is a relatively natural beach. Its members rescue 5 people on average each year." For more detailed, and up to date, information check out https://beachsafe.org.au/beach/vic/greater-geelong/barwon-heads/13th.

Barwon Heads Golf Club House
Located on Golf Links Road, the Barwon Heads Golf Club House, which was built in 1923-4 to the designs of the architectural firm Klingender & Hamilton, is listed in the Victorian Heritage Register as the first Country Club in Victoria. The Register records: "A tender was accepted in 1923 from John Smith of Meredith for £12,500. The new building was described at the time as Australia's first country club, built on the nations' first links course. It was an exclusive residential club whose members included many of Victoria's prominent citizens, and it was used for summer holidays by members from Geelong and the Western District. As well as the golf links facilities included three tennis courts and the nearby beach for swimming. By 1925 almost £20,000 had been spent on the clubhouse, including furniture and plant, and £5,000 on the course. The clubhouse has undergone a number of alterations, and in the 1990s the rear wings were rebuilt in a sympathetic style to the original designs by the architect Neil McGlashan of McGlashan & Everist ... The Barwon Heads Golf Club is a three-storey asymmetrical gabled timber building in an inter-war California Bungalow style. It is located on a sloping site with views over the golf course and the coast. It was originally painted white with black hatching to imitate Tudor half-timbering on the upper portion but is now painted dark green with white window frames." For more details check out http://vhd.heritage.vic.gov.au/places/result_detail/12549.

Barwon Heads Bluff
'The Bluff' (also known as Barwon Head), which is located at the end of Bluff Road, extends out from the south-eastern corner of town beyond the river mouth and into Bass Strait. The headland is limestone which overlays volcanic lava deposits and it extends out to sea forming submarine reefs which caused a large number of serious shipwrecks between 1850 and 1890. Bluff Road leads to a car park, an ocean lookout, excellent and dramatic walking tracks and a monument which honours those killed in the wreck of the Earl of Charlemont in 1853. Check out https://www.melbourneplaygrounds.com.au/barwon-heads-bluff-walk#.XjE39RMzZBw for more detailed information.

Jirrahlinga Koala & Wildlife Sanctuary
The Jirrahlinga Koala and Wildlife Sanctuary was created in 1983 as a haven for animals injured in the Ash Wednesday bushfires of that year. Since then, as it clearly states on the website, "It is primarily about people who have a disability, a special need, the frail or the aged. What better therapy could there be than to come into a supportive environment to work quietly with animals or just visit and touch a koala or joey that do not place demands on a person's physical or mental capacities." It is home to a range of native animals and is open to the general public. It is located at 177-200 Taits Road and is open daily from 10.00 am - 5.00 pm seven days a week. For more detailed information check out https://www.jirrahlinga.com.au or tel: (03) 5254 2484.

Lake Connewarre State Wildlife Reserve and Reedy Lake
Located 8 km north-west of Barwon Heads is the Lake Connewarre State Wildlife Reserve and Reedy Lake. It is an area of swamps, marshes, lakes and rivers which has a boat ramp; has a pleasant picnic location at Taits Point; offers good opportunities to fish for bream, redfin, mulloway and yellow eyed mullet; and has important migratory bird habitats which are havens for bitterns, swamp hens, ibis, spoonbills, egrets, cormorants and herons. It is also a "significant habitat for a number of endangered migratory bird species. Two international agreements with Japan and China ensure species such as Greenshank, Eastern Golden Plover and Red-necked Stints are protected." There is a useful Park Note which can be downloaded (it has detailed maps) at https://www.barwoncoast.com.au/sites/default/files/park-note-lake-connewarre-state-game-reserve.pdf.

* Prior to the arrival of Europeans the area was home to Wathaurung Aboriginal people.

* The Barwon River was surveyed and named by John Helder Wedge in 1835.

* In 1853 the Earl of Charlemont was shipwrecked and some of the survivors settled in the area.

* European settlement of the area began at Ocean Grove in 1854.

* In 1882 the American Methodist church set up a camp named Ocean Grove. The church acquired 222 hectares of land and named over 30 streets after prominent Methodists.

* The Ocean Grove Wesleyan Church was opened in 1889. That year saw a Post Office open in the area.

* An Anglican church was opened at Ocean Grove in 1896.

* In 1959 some scenes from the movie On the Beach were shot on the local beaches.

* Since the 1960s both Barwon Heads and Ocean Grove have become outer suburbs of Geelong.

* In 1998 the town was the setting for the hugely successful SeaChange television series.

* In 2009 the historic Barwon Bridge was demolished. 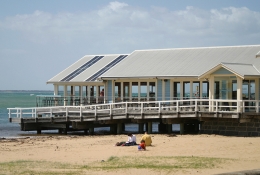 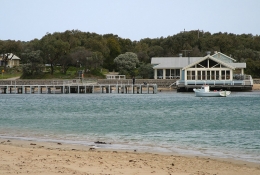 The ‘At the Heads” restaurant and jetty from Ocean Grove 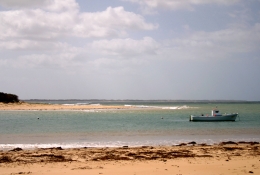 The mouth of the Barwon River 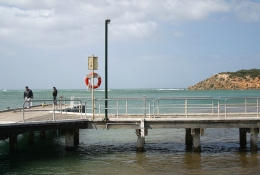 The jetty at Barwon Heads 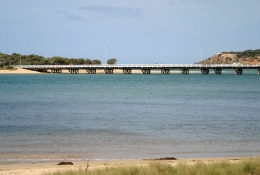 The new bridge across the Barwon River 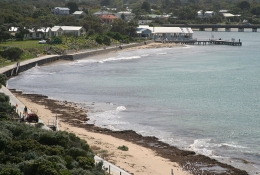 The boardwalk around from the Barwon Heads bridge