Baxter is a small settlement of 2500 people on the southern edges of Greater Melbourne. It is inland from Frankston and part of the Shire of Mornington Peninsula. Historically known for its market gardens and orchards, in recent times it has become part of Melbourne's ever-expanding southern suburbs.

Baxter, a southern suburb of Melbourne, is  located 61 km south-east of the Melbourne CBD on the Mornington Peninsula south of Frankston.

Baxter was named after Lieutenant (or Captain) Benjamin Baxter who, as the first European settler, took up  the 'Carrup Carrup' run in 1840 and successfully bred shorthorn cattle.

Eurutta (Sages Cottage)
Located at 85 Sages Road, this historic homestead, one of the oldest farm houses in Victoria, dates from 1871 and is a rare surviving example of a quality home constructed from vertical sawn slabs. It has timber verandas which support a hipped shingled roof and was built by John Edward Sage, the manager of  Captain Benjamin Baxter's 'Carrup Carrup' station, who overlanded cattle to the district in the 1840s. Sage married Maria Baxter, a daughter of Benjamin Baxter, and took up land on which he built this cottage. Historic stables overlook the lake. "The property remained the home of the Sages descendants until the 1970s after which time it was operated as a restaurant and tourist facility before being purchased by Menzies Inc., an organisation dedicated to caring for disadvantaged youth. In 2013 Wallara took over the property to provide innovative disability services in the tranquil setting, which included animal experiences, horticulture and hospitality training." For more information - it is now open to the public for tours - check out https://sagescottage.com.au or tel: (03) 9792 2985. There is also an interesting cafe, Harvest at Sages Cottage Farm, run by disabled people, which serves a range of light meals from Monday to Thursday from 9.00 am - 2.00 pm. It is often used for weddings and special events on the weekends.

Mulberry Hill
Located at 385 Golf Links Road, 'Mulberry Hill' is the former home of Joan Lindsay (the author of Picnic at Hanging Rock) and her husband, Sir Daryl Lindsay, the brother of the artist, Norman Lindsay. It is an American Colonial style weatherboard house on a hill in rural surrounds, offering views of Western Port Bay. The Lindsays inherited the original four-room 1880s cottage when they purchased the property from cousins of the painter Frederick McCubbin in 1926. They worked on improving the elegant home that same year. The new, extended home was designed by Harold Desbrowe Annear as an extension to the original 1880s cottage. The property was originally part of the Carrup Carrup estate, established by Captain Baxter in 1840.
The Victorian Heritage Database (check out https://vhd.heritagecouncil.vic.gov.au/places/66231/download-report) notes of the garden: "Major garden elements include a large semi-circular cypress hedge with rockery under, the associated brick garden wall with cast cement urns, Italian cypress, pathways and hedges on the south, and an axial brick-paved walk focused on a sundial. The paved garden area to the rear has an enclosing garden wall made from slop moulded bricks and includes an old mulberry tree, from which the house derives its name. The property is entered via a curving drive lined with gums."
The National Trust website explains: "Sir Daryl Lindsay was Director of the National Gallery of Victoria from 1941 to 1956, and was knighted in 1957 for his services to Australian Art. A member of the famous Lindsay family of artists, he was an accomplished painter and print maker. He also assisted in founding the National Trust of Australia (Victoria) in 1956 and was its first president.
"His wife, Lady Joan Lindsay was an artist and writer, best known for her novel, Picnic at Hanging Rock. Her autobiographical novel Time without Clocks is about the Lindsay’s life together at Mulberry Hill and includes commentary about the arts and social history of the time. The house and its contents, a collection of Australian art, Georgian furniture and glassware and Staffordshire ceramics, was bequeathed to the National Trust by Sir Daryl and Lady Joan Lindsay."
Guests at the house have included Vivien Leigh, Sir Robert Helpmann, Banjo Paterson, Sir Robert Menzies and Dame Nellie Melba. As both Lindsays were artists, there is, not surprisingly, a fine collection of art by the likes of the Lindsays, Frederick McCubbin, Rupert Bunny, John Perceval, Constance Stokes and Margaret Preston, as well as Georgian furniture, literary items and memorabilia. Joan Lindsay's writing room has also been preserved.
The house and property were bequeathed by Joan Lindsay to the National Trust which opens it to the public every Sunday from 11.00 am - 4.00 pm.  Tours for groups can be organised, tel: (03) 5656 9889. Check out https://www.nationaltrust.org.au/places/mulberry-hill for further details.

* Prior to European settlement the area was inhabited by Boonwurrung Aborigines.

* The town was named after the first European settler in the area Captain Benjamin Baxter who, in 1840, took up the 'Carrup Carrup' run where he successfully bred shorthorn cattle.

* Baxter's daughter married John Sage who took up an adjoining property, 'Eurutta'. The slab house on the land was built in 1841 and is one of Victoria's oldest farm houses.

* Baxter Primary School was established in 1890.

* Joan Lindsay, who wrote Picnic at Hanging Rock, lived at Mulberry Hill near the town from the late 1920s until her death in 1984.

* The novelist Nevil Shute lived in the town in the 1950s.

* In the 1980s the Mornington railway line through the town was closed.

* Today Baxter is a small settlement inland from the major seaside attractions at Frankston and Mornington and the southern suburban sprawl of Melbourne. 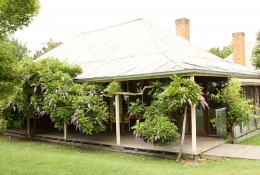 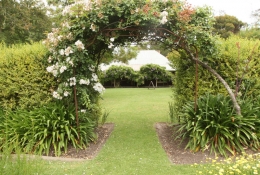 The garden at Sage Cottage 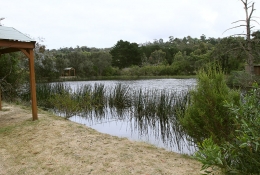 The lake at Sages Cottage 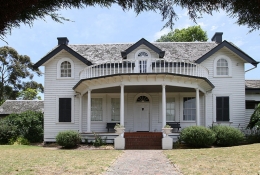