Beaconsfield is a small town on the main road which runs up the western side of the Tamar River. Although the town has struggled with problems of underground water seeping into the mine shafts, it still can claim that at its height it was the third largest town in Tasmania and that its gold production helped the economy of the island in a significant way. Today the highlight of the town is the remarkable Beaconsfield Mine & Heritage Centre.

Beaconsfield is located 39 km north-west of Launceston on the West Tamar Highway.

The site of modern day Beaconsfield was originally known as Cabbage Tree Hill. This was changed to Brandy Creek during the 1870s and in 1879 it was officially named Beaconsfield  to honour the Prime Minister of Great Britain, Benjamin Disraeli, the Earl of Beaconsfield.

Beaconsfield Mine & Heritage Centre
Once known as the Grubb Shaft Museum Complex (a name which was changed in 2008 after the Beaconsfield Mine disaster) the remarkable museum is a place where, given that it has over 10,000 objects, a visitor could easily spend a day.

It is located on West Street and the Centre was originally based on the gold mining era between 1877 and 1914. Today, after an injection of Federal Government funds, it is broken up into the Diprose Room, Mine Rescue, Life & Times, the Grubb Shaft Engine Room, a Miner's Hut, Pump Relics, a Boiler House and a Water Wheel.

The Heritage Centre also tells the story of Beaconsfield and how the original Tasmania Gold Mine, although it only operated for 37 years, produced 26 tonnes of gold worth about £12 million and was dug to a depth of 477 m. It tells the story of how the mine constantly battled water problems with, at one time, over 36 million litres being pumped out of the shafts every day. The Grubb Shaft Engine House, which lies at the centre of the complex, has two huge Romanesque arches which were completed in 1904 and which make the museum one of the town's most distinctive landmarks. To explore the Centre before visiting, check out http://www.beaconsfieldheritage.com.au. It is an outstanding website with lots of useful information about the building.

Bruen Waterwheel
"This waterwheel symbolises the Bruen Waterwheel completed in April 1880. Bartholomew Bruen completed his first 9.2 m waterwheel on the eastern slope of Cabbage Tree Hill, approximately opposite the Ophir Hotel. The wheel utilised water brought from the other side of the hill by a long water race and was used to drive a 10 head stamper battery for crushing quartz. It was so successful that the battery was doubled in size to 20 heads ... the wheels were an icon of Beaconsfield in the late nineteenth century."

Todd Russell and Brant Webb
"The names Todd Russell, Brant Webb and Larry Knight are almost synonymous with Beaconsfield. On Anzac Day 2006 the men were trapped 925 m underground approximately below the Police Station in Grubb Street, about 100 m from here (to your left). After a herculean effort and support from people and companies all over the state and on the mainland, Todd and Brant were rescued 14 days later. The drama and tragedy became a book and film and are the subject of an extensive display in the Beaconsfield Mining & Heritage Museum."

Tom Ah Sing
"Tom Sing (or Ah Sing) was a gold miner, market gardener and interpreter. Chinese miners were some of the very first on this goldfield and some, like Tom, married local ladies and stayed. He was well known in northern Tasmania in the 1870s because of his work as a court interpreter and mining agent. His honesty and intelligence were so widely and highly regarded that if you went up against him in a court case you would surely lose. The police and magistrates were far more ready to take his word than yours! In the 1880s he returned to settle permanently in Beaconsfield and changed his name to "Seen" and you will find many of his descendants in Beaconsfield today."

William Dally
"Despite his forbidding and powerful appearance, William Dally was an amiable and generous man. He and his brothers David, John, Job and James began a systematic search for gold in the Beaconsfield area in 1869 after many reports of occurrences dating from 1847. On the 16th June 1877 William found the amazing Tasmania Reef outcropping on the surface near the top of Cabbage Tree Hill. He scraped the surface dirt away and found lumps of gold "like blackberries on the bush" in the soft stone. Willliam and his brothers quickly pegged the ground and when secure they encouraged people from Launceston to come and see their discovery, freely permitting them to break off golden samples! This immediately became Tasmania's greatest gold rush ..."

Thomas Cook Just
"T C Just was the publisher/editor of the Cornwall Chronicle in Launceston, which competed with the Examiner and was finally taken over by them in 1880. Under him the Chronicle tirelessly promoted the mineral wealth of the Beaconsfield area nationally and internationally especially the iron ore and gold resources. Beaconsfield was where the iron ore was first discovered in Australia in 1805 and in the 1870s T C Just set up and became Managing Director of the British Tasmanian Charcoal Iron Co at Beauty Point. This was Australia's first hot-blast iron smelter and its biggest industrial complex at the time. He also set up the Brandy Creek Quartz Gold Mining Co in 1876, which was the first public gold mining company on this goldfield. In later life he became a member of parliament and was one of the guiding minds behind the Australian federation."

Of particular interest, just over the road from the Heritage Centre, is an old miner's cottage and the one-teacher school from Flowery Gully. A commentary is provided by pressing a button which activates an audio history of the building.

Most of the Beaconsfield Walk of Gold is down Weld Street. It passes hotels, churches, halls, banks, and mining operations. One particular local building of interest is the:
Holy Trinity Church
The wooden Holy Trinity Church is No. 13 and is located in Weld Street. It was built in 1907 and has ornate wooden gables and tower. It is an unusual timber church (part of the exterior is covered by zincalume) with the interior featuring impressive rough-hewn timber and some fine woodwork.

* Prior to European settlement the area had been inhabited by members of the Tyerrernotepanner First Nation language group for thousands of years.

* The first European explorer into the area was Colonel William Paterson in 1804 who travelled from the site of George Town and established a settlement which he called York Town.

* The first European settlers arrived in the area in 1805. They called their settlement Brandy Creek.

* By the 1820s there was a limestone quarry operating in the district. The limestone was shipped across the Tamar River to George Town where it was used for building.

* In 1847 gold was discovered at Beaconsfield but the attraction of the richer goldfields in Victoria ensured that it did not result in a gold rush.

* In 1877 William and David Dally found a gold reef on Cabbage Tree Hill. That same year they sold their claim for £15,000 to William D Grubb and William Hart.

* In 1879 the town's name was changed from Brandy Creek to Beaconsfield. The same year three shafts were sunk to access the gold reef.

* In 1880 the Bruen Waterwheel, which would eventually double the capacity of the local battery stamper, began operating.

* By 1881 Beaconsfield was known as the richest gold town in Tasmania. By the turn of the century there were 53 companies working the goldfields.

* By 1903 water in the mines was causing problems and the Tasmanian Gold Mining Company was formed to raise capital to build a boiler driven pumping station which became known as the Grubb Shaft Engine House. The building is now the Beaconsfield Mine & Heritage Centre.

* Around 1904 Beaconsfield became the third largest town in Tasmania.

* In 1914 the gold mine shut down because of constant problems with water.

* In 1953 Beaconsfield became the first town in Australia to fluoridate the town's water supply.

* On 25 April, 2006 a rock fall at the Beaconsfield gold mine resulted in the death of one miner, Larry Knight, and the trapping of two miners, Brant Webb and Todd Russell, approximately one kilometre underground. Fourteen miners escaped. The two trapped miners were not rescued until 9 May, 2006 during which time Beaconsfield and the mining disaster became a huge news item.

* In 2008 the Grubb Shaft Gold & Heritage Museum changed its name to the Beaconsfield Mine & Heritage Centre. It was taken over by the West Tamar Council.

* The Beaconsfield gold mine was closed in June, 2012. By that time 2 million ounces (62 million grams) of gold had been extracted. 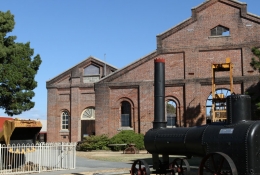 The Boiler House and Grubb Shaft Engine House at the Beaconsfield Mine & Heritage Centre. 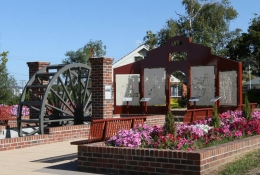 The mining memorial below the Heritage Centre. 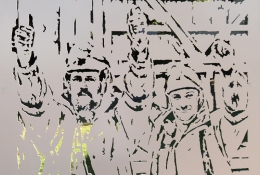 The etched images of Todd Russell and Brant Webb at the Memorial below the Heritage Centre. 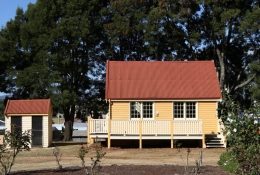 The one-teacher school in the park over the road from the Heritage Centre. 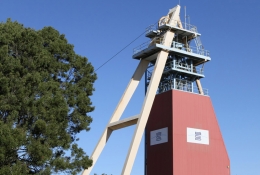 The mine shaft adjacent to the Beaconsfield Mine & Heritage Centre. 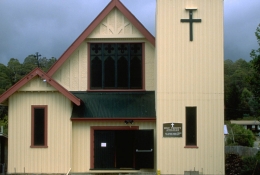 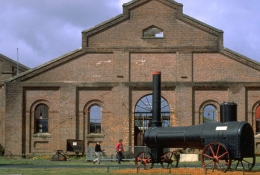