Substantial rural service centre on the banks of the Logan River.

Beaudesert is attractive rural service centre which is an easy day trip from Brisbane and the Gold Coast and consequently caters for both the surrounding farming community and for day trippers from the state capital. It has a number of interesting and historic buildings with St Mary's Catholic Church being truly remarkable and memorable.

Beaudesert is located 69 km south of Brisbane and 46 m above sea-level.

In 1842 a property, known as Beau Desert Station, was established in the area. It was reputedly named after a Cistercian Monastery, Beau Desir, in Staffordshire although there are other interpretations.

Historic Buildings
St Thomas' Anglican Church
Located at 7-9 Albert Street this modern church was built in 1956-1957 for £20,000. The church, the spire and the lychgate were all designed by Theo Hutton from the architectural company, Ford Hutton & Newell. An older church, rectory and parish room dating to the late 1890s are all still on the site.

Beaudesert Hotel
Located at 80 Brisbane Street, this is a typical, and interesting, hotel which was designed and built in 1941. It replaced a previous, elegant old hotel. It is of particular interest, as the Scenic Rim Local Heritage Register notes, because it "embodies the key elements of a local hotel in the Inter-War Modern style and is both rare and representative of its type ... Key features include the curvilinear brick façade, horizontally oriented timber sash windows and parapeted roof." For more detailed information check out http://www.scenicrim.qld.gov.au/documents/717563/41748830/Scenic%20Rim%20Local%20Heritage%20Register.pdf.

Beaudesert Masonic Centre
Located at 33 Brisbane Street, this unusual (Masonic Centres are usually much more ostentatious) fibro building has timber sash windows and a corrugated iron room. Look carefully and you will see that "the building uses Masonic symbology throughout, such as the three-tiered windows and the angular façade representing the Masonic compass." For more detailed information check out http://www.scenicrim.qld.gov.au/documents/717563/41748830/Scenic%20Rim%20Local%20Heritage%20Register.pdf.

St Mary's Catholic Church
The town's most impressive historical attraction is St Mary's, a magnificent timber church, which is located on Bromelton Street and is attached to St Mary's Primary School. It has an unusual history. The first St Mary's, known at the time as Our Lady of the Purification, was completed in 1889 but moved to Kerry in 1907. That same year the current church was completed. The Scenic Rim Local Heritage Register notes: "St Mary's was blessed and opened on 15 September 1907. The foundation stone had been laid on the 2 February in the same year. Designed by G H M Addison, the timber gothic church boasted a bell tower. The building was raised and restumped in the 1920s, with brick front steps added in the 1950s ... The building is representative of a large timber church in the carpenter gothic style of architecture that was popular for churches from the late nineteenth century. Features include the ornate gable decoration, vertically oriented stained glass windows, and asymmetrical façade with bell tower. The design demonstrates a high degree of creative and technical achievement. The church has social significance as a gathering place for the local Catholic community since the late nineteenth century." For more detailed information check out http://www.scenicrim.qld.gov.au/documents/717563/41748830/Scenic%20Rim%20Local%20Heritage%20Register.pdf.

Racecourse Grandstand
Beyond St Mary's Church on the Boonah Road (which continues from Bromelton Street) is the old racecourse with a delightful timber grandstand which was built in 1912. In 1927 the Duke and Duchess of York attended the Bushman's Carnival and graced the grandstand with their presence. It was also popular during World War II when members of the Light Horse Brigade were stationed at Beaudesert.

Beaudesert Museum
Located at 54 Brisbane Street, in the Jubilee Park, and open 10.00 am - 2.00 pm daily, the Beaudesert Museum has a well-preserved slab hut - Pioneer Cottage which was built by Patrick Milbanks on his Kerry selection in 1875. It was presented to the society by his grandson in 1961. The website explains the contents: "The main area has a collection of photographs and written documents along with a comprehensive family history archive and several display cases of collectibles. A library of books, covering a broad spectrum of topics, some by local authors both contemporary and historical. The rear area contains a display of dioramas of local interest along with some of our aforementioned animal drawn vehicles and our prize – the Dennis Fire Engine (still in working order) - also a large display of hand tools, many being of local invention and construction showing the ingenuity of our early settlers who had to make it or wait years for delivery. The third area currently houses industrial equipment - a metal press guillotine, the Gutenberg machinery and a working astronomical telescope, made by the founder of Lithgow Iron Works who later established Port Kembla Iron Works. For more information check out http://beaudesertmuseum.org.au/main or tel: (07) 5541 3740.

Wyaralong Dam
Located 22 km west of Beaudesert via the Beaudesert-Boonah Road, the Wyaralong Dam (also known as Lake Wyaralong) was completed in 2011. It lies east of Boonah on Teviot Brook, a tributary of the Logan River, covers an area of 12.3 square kilometres and is stocked with Australian bass and Mary River cod. The lake, which is open from early morning until sunset, has facilities for camping, canoeing, kayaking, rowing, sailing, fishing, bushwalking and electric powered boating. There is an excellent map and detailed information about camping, fishing and boating on the lake which can be downloaded at http://www.seqwater.com.au/sites/default/files/PDF%20Documents/Recreation/Tear%20off%20map%20-%20WYARALONG%20-%20V001APR17.pdf.

Rathdowney
Rathdowney is a small rural service centre located on the Mount Lindesay Highway, 33 km south of Beaudesert. The town developed after 1906 when the original Rathdowney estate, established in 1876, was broken up. Timber and dairying dominated the local economy. Today it is a charming village dominated by the Rathdowney Visitor Information Centre and Historical Museum on the Mount Lindesay Highway which is open 9.00 am - 3.00 pm Monday to Friday and 9.00 am - 4.00 pm on weekends, tel: (07) 5544 1222. Located in the old Commercial Bank building, it houses displays relating to local history, as well as an old tramway station building and waiting room. The tramway operated from 1911 to 1944 and was important for shipping goods such as cream and timber out and connecting passengers  to the outside world. There are a number of interesting historic buildings in the village including:
* The Barn - which houses a collection of farm equipment including a cream truck, a bullock wagon and a spring cart. It also has a huge table cut from a single log.
* The Prison Hut - one of the huts used for prisoners at the Palen Creek Low Security Farm.
* The Old Shop - which is now in the Visitor Information area.
* The Tramway Building - which houses a display of pioneering women, local sawmills and the Logan and Albert butter factory.
For more information check out http://www.rathdowney.org.au.
There are panoramic views of the village and surrounding area from Captain Logan's Lookout Park at the end of John Street.

Mount Barney National Park
Located south west of Rathdowney, the Mount Barney National Park is easily accessible from Beaudesert via the Mount Lindesay Highway and Mount Barney Road. It is an impressively mountainous park characterised by valleys, caves, crevices, open eucalypt forest, grassy slopes, creeks, cascades, pools and examples of rare fauna. Declared part of a World Heritage Reserve in 1994, it was once part of a route through the mountains used by three Aboriginal tribes. The fauna includes wallabies and kangaroos, as well as platypus and the distinctive flora includes an Antarctic Beech Forest can be found on Mount Ballow; tall banksia forests on Mount Lindesay; heathland on Mount Maroon and some rainforest on Mount Barney which is the third-highest peak in Queensland. The first European to climb Mount Barney, in 1828,was Captain Patrick Logan, then the commandant of the Moreton Bay penal settlement. His companions were the botanists Allan Cunningham and George Fraser.

There are two walks which can be accessed via Mt Barney Road and Upper Logan Road:
* Lower Portals Walk. The Lower Portals Car Park is the starting point for a 3.7 km walk to Lower Portals, which is a large and beautiful pool in a gorge carved out by Mt Barney Creek. The walk involves some steep gradients.
* The Yellow Pinch walk (6.5 km) starts from the Yellow Pinch Car Park and follows a fire trail past South Ridge to an impressive section of rainforest.
There is a detailed map of the park with clear information about access to these walks. It can be downloaded at https://www.npsr.qld.gov.au/parks/mount-barney/pdf/mt-barney-np-map.pdf.

* Prior to the arrival of Europeans the district was home to the Bundjalung Aboriginal people.

* The area had been explored in the late 1820s by both Allan Cunningham and Patrick Logan after whom the nearby river is named.

* The town was named after Beau Desert station which was established in the area in 1842.

* The large landholdings which were taken up in the early 1840s remained until the 1860s when they were broken up.

* By 1863 South Sea islanders were working in the local cotton fields.

* In 1874 Beaudesert was surveyed and land sales occurred.

* The local Tabragalba Divisional Board was proclaimed in 1879.

* By 1880 the settlement had a Post Office, blacksmith and hotel.

* During the 1880s a school and a general store opened in the town.

* The railway arrived in 1888. That year saw the local Church of England consecrated and a sawmill start operations.

* The Logan and Albert Pastoral Association was formed in 1895.

* In 1902 the Beaudesert Tramway was opened. It transported timber, dairy produce and livestock to Beaudesert from the surrounding area.

* The first edition of the Beaudesert Times was published in 1908.

* Beaudesert became a separate municipality in 1912.

* The Beaudesert Tramway was closed in 1944.

* In 1961 Boys Town was opened by the Catholic Church. That same year saw the formation of the Beaudesert Historical Society.

There is a useful local website. Check out http://www.scenicrim.qld.gov.au/beaudesert. 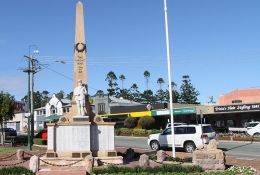 The war memorial in the centre of town 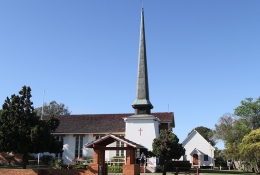 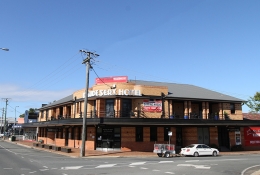 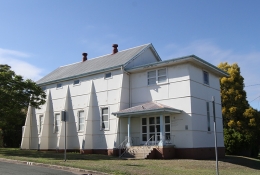 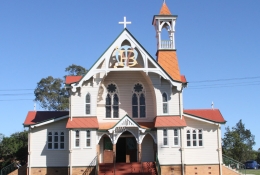 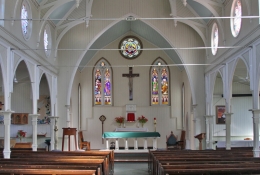 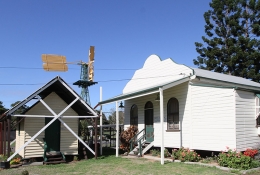 Historic buildings at the Beaudesert Museum 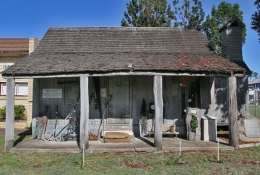 Pioneer cottage at the Beaudesert Museum 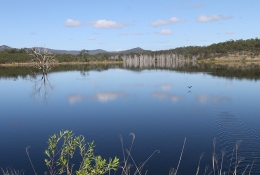