Beaufort is a modest rural centre servicing a district which concentrates on wool, farming, forestry, quarrying and mining. It is an area which produces beef, fat lambs, wool, cereals and timber. The town is noted for its large Band Rotunda and its impressive War Memorial Rose Garden.

Beaufort is located on the Western Highway, 160 km west of Melbourne and equidistant between Ballarat and Ararat. It is situated 387 m above sea-level.

Historical Beaufort
The best way to explore Beaufort is to park near the Band Rotunda, in the main street, and walk around town reading the signage. Particularly impressive are the Mechanics Institute, the Court House, the Memorial Rose Garden and the Band Rotunda. All are within easy walking distance of the rotunda. There is a useful map and guide (although it only lists the places and does not provide descriptions of the buildings) at https://visitpyrenees.com.au/wp-content/uploads/2017/03/beaufort-historical-walk.pdf. It is also included in the Pyrenees Visitors Guide.

Band Rotunda
Located on the main street opposite the Visitor Centre is the landmark octagonal band rotunda (1908) which is crowned by a fine octagonal lantern with iron-grille decoration and a four-faced clock.

Mechanics' Institute
Located at 22 Havelock Street, the former Mechanics' Institute started life as a Protestant Hall. It was initially used for church services - the Catholics and Primitive Methodists were not permitted to use it - but when churches were built it was sold to the Mechanics Institute which used it to house their Free Library and run their courses.

Weighbridge House
Just past the Fire Station and next door to the Mechanics' Institute is the small, and very unusual, Weighbridge House. The signage explains that it was "Built by the Shire of Ripon on October 1874 to house the weighbridge scale (the two lamps being added in 1885) and sited where the Band Rotunda now stands. Moved in 1903 it became a storage shed for Wotherspoon Bros. and in the 1950s a shelter for visitors to the Beaufort Cemetery. Later it was relocated to Main Lead as a tool shed where it remained until February 2005 when it was donated back to the people of Beaufort by the Cellange Family. Finally restored it was returned to this site in November 2008."

Beaufort Court House
Located at 9 Livingstone Street and now used by the Beaufort Historical Society, the Beaufort Court House was built in 1864. It cost £1,499/11/- and was made from handmade bricks using clay from the town's West Common. The Historical Society notes that: "The original building comprised the court room with its unique semi-circular entrance portico and lobby spaces and three rear offices. The Court House building adopts the straightforward temple-like form typical of 19th century rural and metropolitan buildings of its type."

Beaufort Historical Society Museum
Located at 9 Livingstone Street in the Court House, the Beaufort Historical Society Museum has copies of local newspapers from 1874, extensive records and information about the local area. It is open every second Sunday of the month from 11.00 am - 3.00 pm, or by appointment and the Resource Centre is open on the first Wednesday and fourth Saturday of the month at 11.00 am. Tel: (03) 5349 8227

Beaufort Memorial Rose Garden
These exceptionally attractive gardens are dedicated "to those airmen who have no known grave and who lost their lives over Bass Strait while training to defend Australia and win the struggle for peace." The original war memorial was established in 1927. Today the gardens, planted in 1995-1996, include ten distinctive features:
1. War Memorial
2. Memorial Walls & Rosemary for remembrance
3. Lone Pine
4. Anchor - representing the Royal Australian Navy
5. Rising Sun - representing the Australian Imperial Forces and the Royal Australian Regiments
6. Propeller - representing the Australian Flying Corps and the Royal Australian Air Force
7. Pioneers Stone
8. Red Roses - representing the Blood of Flanders
9. Yellow Roses - along the Path of Peace
10. Pink Roses - representing Women's Services.
In 2017 three wood carved statues were unveiled in the Rose Garden, The Courier reported: "A new memorial to First World War soldiers will be unveiled during Beaufort’s Anzac Day ceremony on Tuesday [2017]. Two wood-carved soldiers will now stand permanently at the entrance to Beaufort Memorial Park. A third carving in the centre of the park’s rose garden depicts an airman, soldier, sailor and nurse. The Beaufort Garden Club project took three years to complete and cost $12,000. A proposal to use wood carvings was first put forward when a disease-ridden elm tree in the park was removed, however the wood was in too poor a condition to use. Eventually a cedar tree from the Mechanic’s Institute was used."

Railway Station
Located in Pratt Street is the town's old railway station (1874) which is no longer in use. It closed in 1994, reopened in 2004, and in 2014 became a community arts centre which included the Art Trax Gallery.

Beaufort Lake
Located on Lawrence Street 1.5 km from the centre of town, Beaufort Lake is a relaxed location for a picnic. It has a caravan park and the lake is ideal for fishing. It is regularly stocked with rainbow trout, brown trout, estuary perch and redfin.

Camp Hill Lookout
An excellent, panoramic view over the town can be had from Camp Hill. Take King Street out of town and turn on Camp Hill Road.

Lake Goldsmith Steam Rally and Wildlife Reserve
Located 16 km south of Beaufort via Skipton Road is Lake Goldsmith. It has become famous for the Lake Goldsmith Steam Rally which is held there every year, usually in May and November. It attracts hundreds of steam and antique oil engines. The actual site of the rally is 1 km east of the lake along the Lake Goldsmith to Ballarat Road. Check out http://www.lakegoldsmithsteamrally.org.au for dates and information.
The Wildlife Reserve, which comprises the lake and its surrounds, is a habitat for ducks and other wildlife. Lake Goldsmith was formed by volcanic activity between 100,000-500,000 years ago. It covers 820 ha and does not have a stream or creek flowing into it. Thus it relies entirely on rainfall and the catchment around the lake. Not surprisingly, given the dryness of the area, it often dries up although after the 2010-2011 floods it was full. It was first developed as a park in 1884 and today has a picnic area, a jetty and a caravan park. There is an interesting article about the lake drying up in 2008 which can be accessed at https://www.thecourier.com.au/story/503703/the-demise-of-our-local-water-icons.

Mount Buangor State Park
Mount Buangor (known to the local Aborigines as Beereep Beereep) State Park (2630 ha) is located 29 km to the north-west of Beaufort via the Western Highway and Ferntree Gully Road. A side road leads to the Middle Creek camping area which is joined by a 15 km network of tracks to the Ferntree campsite. It also the starting point for the strenuous Cave Walking Track.
There are shorter tracks in the park including:
Waterfalls Nature Track - which starts at the Ferntree campside, is only 1 km long (45 minutes return) and goes to Cascade Falls and Ferntree Falls.
Two Mile Circuit Walk - which is a 2.2 km walk from the Ferntree campsite which takes around an hour. The flats here are characterised by woodlands of swamp gum, manna gum and blue gum.
Middle Creek Walk - a 6.2 km, 90 minutes return walk which connects Middle Creek and Ferntree campsites.
A useful Park Note can be downloaded at https://parkweb.vic.gov.au/__data/assets/pdf_file/0019/315604/Mt-Buangor_Web0912.pdf.

Mount Cole State Forest
Located north of Beaufort, the Mount Cole State Forest can be accessed by driving north on the Main Lead Road and turning west onto the Raglan-Elmhurst Road which bisects Mount Cole State Forest (11,130 ha). There are numerous picnic and camping areas which are clearly signposted off the Raglan-Elmhurst Road, and an extensive system of walking trails, ranging from short family walks to overnight hikes. ln total there are 250 km of tracks in the forest though many are only suitable for 4WD.
The excellent Forest Notes describe the main walks as "a walker’s paradise. Whether you have a day or a week to spend, there is a walk for you.
1. Beeripmo Walk
Distance 21 km 11 hours 2 day return (moderate)
Starting at Richards campground, the most recent walk at Mt Cole is a journey of discovery for the novice and experienced hiker. Walkers can experience a variety of different forest environments from lush forests with ferns, falls with a gentle sound of running water, the brilliant green of the moss covered rocks, weather beaten rocky outcrops and magnificent vistas of the tablelands below and surrounding mountain ranges.
2. Grevillea Walk
Distance 1.8 km 45 min one way to Richards (moderate) The Glut picnic area is the starting point for this walk that takes you on a short journey through Mt Cole to Richards and return. Other walking tracks in the area include:
3. Woods Gully Walk
Distance 1.4 km 40 min return (moderate)
4. Paradise Walk
Distance 9.2 km 4 hours one way (difficult)
5. Borella Walk
Distance 5 km, 3 hours one way (moderate)
This walk from Chinamans to Ben Nevis is a bird watchers delight. It was named in memory of noted local bird observer Max Borella and offers great lookouts. As the walk can be quite steep in places, it is recommended that you take your time and enjoy the views."
For more information check out Forests Notes: Mount Cole State Forest which can be downloaded at https://www.ffm.vic.gov.au/__data/assets/pdf_file/0019/26281/FS0048-Mount-Cole-State-Forest_Oct-2012_final.pdf.

* The area was once occupied by the Jajowarrung Aborigines who called the area 'Peerick'.

* The first European in the area was the explorer, Sir Thomas Mitchell, in 1836.

* The first squatters were the Kirklands and a Mr Hamilton who took up land in 1838.

* Hamilton's 'Trawalla' station was taken over by Adolphus Goldsmith in 1841.

* Gold was discovered in the district in 1852 in Yam Holes.

* Four settlements sprung up on the Fiery Creek Diggings' one of which was Beaufort. It was estimated that 40,000 prospectors were attracted to the diggings.

* Anglican and Catholic school were opened in 1863.

* The first council meeting was held in 1864 - the same year the town's primary school was established.

* By the late-1850s there were 10,000 prospectors in the immediate area at the peak of the goldrush.

* By 1865 the town had two breweries, two sawmills and a large number of alluvial mining operations in the gullies around the town.

* Radical activist, labour leader and poet, Bernard O'Dowd was born at Beaufort in 1866.

* The alluvial gold in the district was largely gone by the mid-1860s.

* By the 1870s grazing and logging had taken over from gold prospecting and some ex-miners took up land in the district.

* The railway from Ballarat reached the town in 1874.

* In 1884 the town experienced a serious flood.

* In 1893 Cyril Percy Callister, the inventor of Vegemite, was born at Chute near Beaufort.

* Reef mining in the district continued until 1914.

* After World War I the Trawalla property was subdivided for soldier settlement.

* In 1995 Beaufort became the administrative centre for the Pyrenees Shire. 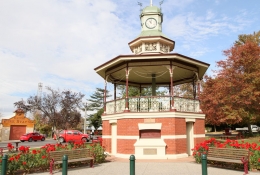 The band rotunda (1908) in the main street of town 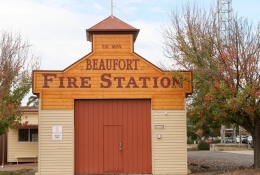 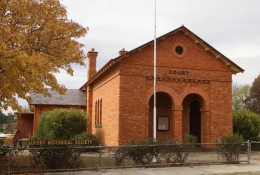 Court House, now the rooms for the local historical society, in Beaufort 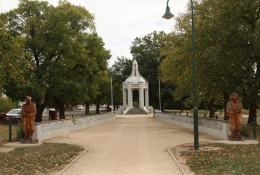 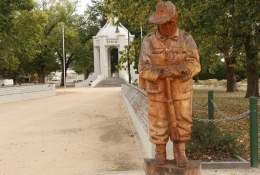 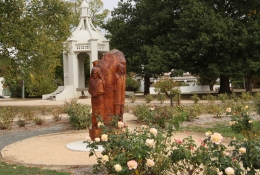 Carved statue of an airman, soldier, sailor and nurse in the Memorial Rose Garden 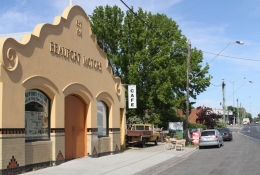