In the 1990s Bedarra Island was known as a very exclusive, upmarket resort with an open bar which allowed visitors a free range experience where they could drink as much as they wanted. This was supplemented by a classy restaurant and accommodation which was mostly very private. In 2011 Cyclone Yasi destroyed much of the island and, within months, it was sold to the Charlton Hotel Group who reduced the number of villas (from 16 to 10), gave emphasis to all things eco-friendly (the diesel generators were replaced with solar electricity and hot water) and made all the villas private. The result is a chic, small, eco-friendly and very luxurious (and expensive) resort on a tropical island. Privacy is a keynote.

The wooded, and very exclusive, Bedarra Island is located 5 km off the Queensland coast, between Townsville and Cairns. It is usually accessed via Dunk Island which is 6 km north of Bedarra and Mission Beach which is 10 km from the island.

The local Aborigines called Bedarra Island, 'Biagurra'. It is local mythology that E.J. Banfield, the legendary beachcomber who lived on Dunk Island, did not hear 'Biagurra' accurately and, thinking he was giving the island its correct Aboriginal name, called it Bedarra.

How do visitors access it?
Access is via Dunk Island and Mission Beach. Bedarra is 10 km off Mission Beach; a launch departs daily and takes 30 minutes. Helicopter transfers are available from Cairns to Mission Beach or to Bedarra.

How big is it?
Ten private villas, all with views to the beach and bay, hold a maximum of 20 guests. The resort also has a freshwater swimming pool, restaurant with outdoor terrace, lounge with  24-hour open bar (all beverages included in the tariff), and island boutique. The island is 100 ha and all accommodation is in private and free standing villas.

Who does it appeal to?
People who value their privacy and quietness and five star service. It is a model of eco tourism with a hybrid solar system and back up generators; solar hot water systems; fresh rainwater and a bio-cycle septic system.

Free activities
Everything on the island is free including, famously, the open bar which encourages visitors to make their own cocktails and provides a vast array of boutique wines, boutique beers, spirits and liqueurs. Visitors pay extra for massage and spa treatments, cellarmaster wines, snorkelling and SCUBA trips, and reef fishing charter.

Bushwalking
There are two pleasant walks on the island.
(a) a short walk from the Resort which goes down to Wedgerock Bay and then follows the coastline around offering excellent views of 'The Twins' and Pee-Rahm-Ah Island from Swiftlet Rock.
(b) A walking track across the island to the old Hideaway Resort. It starts the Resort and winds through rainforest to the western side of the island. The walk takes approximately 40 minutes one way.

Eating at the resort
All meals are included in the tariff "Breakfast comprises a tropical buffet with fresh hot breakfasts cooked to order, lunch is a lighter and more relaxed meal, and dinner is an interactive, ever-changing, multi-course experience. A fresh selection of fruit, cheeses and other snacks are available between meal times. Gourmet picnic hampers are available for lunch to enjoy on your own private beach.".

Other activities
Private chartered trips to the Great Barrier Reef are conducted from Bedarra Island. There are three options: SCUBA diving on the reef, snorkelling and helicopter scenic flights. The snorkelling and SCUBA diving trips are organised by Mission Beach Dive and the helicopter scenic flights are organised by Island Reef Helicopters. Detailed information is available at https://www.bedarra.com.au/reef-trips.

* Prior to the arrival of Europeans the island was inhabited by Aboriginal people from the Djirbalngan language group.

* In 1770 Captain Cook became the first European to sail up the eastern coast of Australia.

* On 8 June, 1770 Cook sailed the Endeavour into a group of islands which he named the Family Group. This islands comprised Coonanglebah (which Cook renamed 'Dunk' after Lord Montague Dunk, the Earl of Sandwich and First Lord of the Admiralty) 'The Father', Bedarra 'The Mother', Toolghar and Coomba 'The Twins' and Kurrumbah, Budjoo and Coolah 'The Triplets.' In his journal Cook described finding "a parcel of Small Islands laying off the Northern point of the Bay, and, finding a Channel of a Mile broad between the 3 Outermost and those nearer the Shore, we pushed through. While we did this we saw on one of the nearest islands a Number of Natives collected together, who seemed to look very attentively upon the Ship; they were quite naked, and of a very Dark Colour, with short hair." These Aborigines called Bedarra, 'Biagurra'.

* The island was first settled by Europeans when Captain Henry Allason bought the island from the Queensland Lands Department for £20 in 1913.

* The island then went through a number of ownership changes.

* In 1957 Ken and Cynthia Druitt bought the island and subsequently opened a small resort.

* In 1957 Colin Scott, a grazier from Victoria, bought an area on Bedarra Bay and operated it as a private retreat.

* By 1979 Bedarra Bay had been sold to Tor Hulten who converted the property into a small tourist resort called Toranna Plantation.

* In 1980 Australian Airlines, the owners of Dunk Island Resort, bought Ken Druitt's section of the island and opened the original Bedarra Hideaway Resort in August, 1981.  Earlier that year Australian Airlines had also purchased the Toranna Plantation side of Bedarra and operated it as a day resort for Dunk Island guests.

* Bedarra Hideaway was closed in October, 1991 but is still accessible by rainforest track from the resort.

* In late 1997, the Bedarra Island Resort was purchased by P & O Australian Resorts who refurbished it in 1998.

* In 2007 it was named as Australasia's Leading Boutique Resort at the World Travel Awards.

* On 3 February, 2011 the island was hit by Cyclone Yasi. The resort was seriously damaged and forced to close.

* The resort sold to the Charlton Hotel Group in November, 2011.

The island's official website is https://www.bedarra.com.au. It has information about rates and activities. 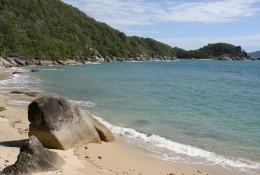 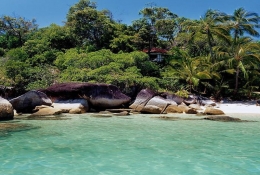 Villas are hidden in the rainforest behind the beach 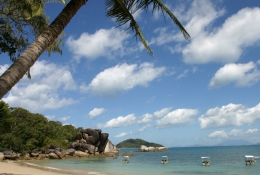 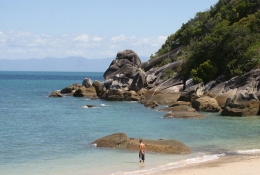 Privacy is a keynote to the island ... even on the beaches