Belgrave, at the southern end of the Dandenong Ranges, is an important tourist destination with numerous gardens, forest areas, lookouts, walking tracks, nurseries, galleries, pick-your-own berry farms, antique shops, galleries, art-and-craft outlets, restaurants, tea rooms and picnic reserves. The highlight of the chic town is the Puffing Billy railway line which is a popular holiday attraction loved by both children and adults. There is also an annual Puffing Billy Railway Great Train Race where joggers race the train over a 13.5 km course every autumn. The town is part of the Dandenongs, a range which reaches 633 m above sea-level and consists mainly of volcanic lava. The ranges experience high rainfall and the combination of rainfall and rich volcanic soils results in an area characterised by vast tracts of forests and fern gullies with impressive gardens.

Belgrave is located  in the Dandenong Ranges 42 km east of Melbourne via Ferntree Gully. It is 227 m above sea level.

Belgrave was the name of a local property owned by E.W. Benson, a councillor. The town was named after the property and the property, in turn, had been named after a chapel in Leeds, England where Benson had grown up.

Puffing Billy
An historic steam train known as 'Puffing Billy', which has become an iconic image of the Dandenongs, runs from Belgrave through Emerald to the Lakeside station and back (26 km return - 1 hour) and sometimes it travels to Gembrook and return (48 km return - 1 hour 50 minutes). It operates every day from the Puffing Billy railway station which is located at 1 Old Monbulk Road, Belgrave. The number of trains per day and the timing of their departure varies so it is necessary to check the website. You can pick the train up at any of the three stations and travel to any of the others. There are also special night trains and the Luncheon Special which departs Belgrave at midday. It offers the choice of First Class travel in the dining carriage on a trip to Emerald.
The Puffing Billy Steam Museum is located behind the Menzies Creek station. It houses a collection of Australian and overseas narrow-gauge locomotives, rolling stock and steam machinery. Passengers may break their journey at Menzies Creek to visit the Museum and then continue or return on a later train.
The trip from Belgrave station to Gembrook takes in Sherbrooke Forest, several fine trestle bridges, Selby township, the landslide site, Menzies Creek station, the Steam Museum, Emerald, Emerald Lake Park, Wright State Forest, Cockatoo Creek valley, Cockatoo township, a number of remote train stations in picturesque bush settings, Gembrook and panoramic views over farmlands, Port Phillip Bay, Westernport Bay, Cardinia Reservoir, Arthurs Seat, the Yarra Valley wine region and the Warburton Range. For information contact the Belgrave office on weekdays from 9.00 a.m. to 5.00 p.m., tel: (03) 9757 0700. There is a detailed and comprehensive web site - https://puffingbilly.com.au.

Lysterfield Lake Park
Located 11 km south-west of Belgrave, the Lysterfield Lake Park extends into bushland around the former Lysterfield Reservoir which supplied water to the Mornington Peninsula from 1936-1975. This Park incorporates valuable remnant native forest and eucalypt plantations. It is also a wildlife refuge which has attracted ducks, swans, grebus, pelicans, Japanese snipe, gang-gang, cockatoos, bellbirds, wrens and honeyeaters.
At the Lakeside Picnic Area there is a car park, picnic areas, barbecues, boat-launching ramps and toilets. There are also two swimming beaches beside the reservoir. Horse riding is permitted in summer on some tracks in the east of the park. Some of the park's tracks are exclusively for walkers while others are also open to cyclists. The paths around the lakeside are wheelchair friendly. The two main walks are (a) a short and pleasant walk from the lakeside area to the dam wall and (b) a 6 km (one way) walk around the lake, across the dam wall and along the Tramline Track, Lamberts Track and Lake Track to the main carpark. It is also popular for mountain bike riding. Check out https://parkweb.vic.gov.au/explore/parks/lysterfield-park where it is possible to download a Visitor Guide, a map for mountain bike riding and a brochure about mountain bike riding in the park. The most comprehensive guide is the Lysterfield Park & Churchill National Park Visitor Guide which can be downloaded at https://parkweb.vic.gov.au/__data/assets/pdf_file/0009/315693/Park-note-Lysterfield-Park-and-Churchill-NP.pdf.

Birdsland Reserve
Located between Belgrave and Lysterfield Lake Park (off Mount Morton Road at Belgrave South), the Birdsland Reserve is 75 ha of bushland with a number of walking tracks. It is recognised as an ideal place to observe birds. There is the possibility of seeing a platypus and it is ideal for a picnic. It was originally owned by the Birds family and was purchased by the local shire and opened to the public in 1984. Over 130 native birds have been identified in the reserve. Check out https://www.yarraranges.vic.gov.au/Lists/Parks-Facilities/Birdsland-Reserve for more information.

* Prior to European settlement the area was home to the Woiwurrung Aboriginal people.

* The forests drew timbergetters in the early days of European settlement. They supplied a growing market in Melbourne.

* The first Europeans in the area arrived around 1851.

* Efforts to reserve land for recreational purposes began in the 1860s and this impulse led to the creation of a number of forest reserves.

* The Benson brothers, who named the area Belgrave, settled in the early 1870s.

* In 1900 a narrow gauge railway was built between Belgrave and Gembrook.

* By 1903 the name Belgrave had been accepted by the local settlers.

* Early in the 20th century, a colony for writers and artists was set up by a Melbourne businessman named J.G. Roberts. It was called Sunnyside and attracted guests including Tom Roberts, Aeneas Gunn and C.J. Dennis who wrote much of his best-known work, The Sentimental Bloke, here.

* In 1953 the Puffing Billy line was closed by a landslide.

* The Puffing Billy railway line was reopened to Menzies Creek in 1962.

* The cool temperate rainforst around the town finally amalgamated (and expanded) in 1987 to form Dandenong Ranges National Park.

* The final section of the Puffing Billy railway line was opened to Gembrook in 1998. 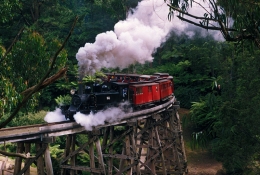 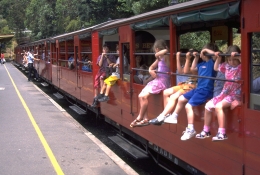 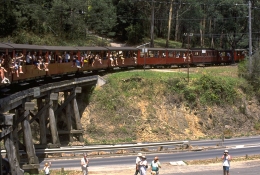 Puffing Billy on a viaduct over a road in the Dandenongs