Bellingen, known to the locals as "Bello", is an attractive township in the heart of the Bellinger Valley surrounded by rich pasturelands. It is a town which historically serviced the surrounding dairy farmers and timber cutters. Over the past twenty years it has become a popular inland retreat from "treechangers" who do not want to live on the coast. The changes are obvious. The menus in the cafes has a distinctly citified feel about them, the shops have lots of home made craft items. These changes coincided with a transitional period in dairy farming which saw the local farmers selling off the odd 30–40 hectares for a price far better than its rural value. The rich soils of the valley and the extensive sunshine and good rainfall have ensured that the town will always be prosperous. Today it is a pleasant retreat away from the Pacific Highway.
In the novel Oscar and Lucinda Peter Carey describes the valley as: "The Bellinger was not like it is now, with wide electric-green fields pushing down on to the river. The banks were like green cliffs of camouflage pierced with giant knitting needles and spun and tangled all about with ferns and creepers". Today it is a charming "tree change" town.

Bellingen is located 520 km north of Sydney, 426 km south of Brisbane and 12 km west of the Pacific Highway turnoff. It is 23 metres above sea level.

It is believed that the town is named after the river that runs through it. The local Gumbaynggir Aborigines called the river the "billengen".

Shire of Bellingen Administration Centre and Maam-Gaduying Meeting Place Park
The Shire of Bellingen Administration Centre, a series of buildings surrounding a rather gracious park, is located in Hyde Street. It includes the library (1882), the local folk museum and the old Headmasters Residence, a handsome timber building on the main street, which has been turned into a Neighbourhood Centre. The park in front of the buildings, known as the Maam-Gaduying Meeting Place Park, also includes the town's Visitor Information Centre and a bust of local boy Adam Gilchrist who became the Captain of the Australian Cricket Team and is described as "Australia's greatest ever one day cricketer".

David Helfgott Sculpture of a Piano
In the grounds of the "meeting place" there is a sculpture celebrating the life of a David Helfgott. The plaque on the sculpture records: "Music is treasure held in store for all humanity”. This sculpture was commissioned by Camp Creative to celebrate the inspirational life of local resident David Helfgott. His life of triumph over adversity saw him recover from a serious breakdown to resume his career and become a world famous concert pianist. Sculptor: John van der Kolk. January 2009.”

The Yellow Shed
Originally it was an old Workers Recreation Hall which was built by Fredrick Doepel at his timber mill in the early 1900s and moved to the present site in 1928. It became the Yellow Shed in 1981 and has since become an iconic building in the town specialising in crafts, artwork, books (it has over 3,000 titles), music, jewellery, body care products and Aboriginal artefacts. It is located at 2 Hyde Street, tel: (02) 6655 1189.

The Sara Quads - 14 Hyde Street
One of Australia's first "media sensations" was the birth of the Sara Quads. The idea of having four children naturally was a novelty back in 1950 and they made history becoming the first surviving quadruplets born in Australia. Their lives were followed with obsessive interest by the Australian Women's Weekly and a movie was made about them when they turned sixteen. (A short news item can be seen on YouTube at https://www.youtube.com/watch?v=tu0SaQTOJOE) Their home in 1950 was the residence at number 14. The house is still standing.

Belligen Walks
There is an excellent downloadable brochure - http://urunga.com.au/wp-content/uploads/WALKING_FLYER_v6.pdf titled Walking Bellingen & Surrounds which lists and details four walks in the immediate area.

Walk 1: Bellingen Southside - Historic Buildings and Trees
The walk starts from the Historical Museum (the local Visitor Centre), takes 90 minutes to two hours, is an easy walk traversing approximately 4 km. It passes the Memorial Hall, the Court House, Hammond & Wheatley's Emporium, the Federal Hotel, the Magnolia Tree which was planted to honour the nurses in World War II, the Masonic Hall, the Anglican Church, the Old Bellingen Council Chambers, the historic residence of Dr Hewitt, McNally House (reputedly the oldest house in the town) and the Old Butter Factory complex of galleries and shops.

The highlights of the walk include:
1. Bellinger Valley Historical Museum
Located at 33-39 Hyde Street, the museum has a photo collection which covers the local pioneers, early forms of transportation in the valley and town life. There are unusual artefacts connected with schools in the district, farming and pioneer families. There is a collection of photographs of sport, the local architecture, medical services and the local timber industry. There is also a small collection of Gumbaynggirr Aboriginal artefacts including stone and wooden tools. For more details check out http://bellingenmuseum.org.au. The museum is open Monday 10.00 am - 2.00 pm; Tuesday 9.00 am - 1.00 pm; Thursday 10.00 am - 2.00 pm and Friday 10.00 am - 2.00 pm. Tel: (02) 6655 0382 for more information or to open the museum out of hours.

4. Hammond & Wheatley
The superb Hammond & Wheatley Emporium was built in 1909 by George Moore. It has been described as "an innovative enterprise with locally manufactured concrete blocks and techniques and materials ahead of contemporary country practice. Restored in 1989. Cast iron columns support the awnings with iron lacework featuring department names. Original brass shop front framings with engraved brass sills remain. Internally a mezzanine floor is reached via a grand staircase."

5. Federal Hotel
The Federal Hotel was completed in 1901. The hotel is an integral component of a streetscape of one and two storey buildings all of which were completed around the turn of the century - the time of Federation, hence the hotel's name.

13. Old Butter Factory
The Old Butter Factory, on the edge of town at Waterfall Way, includes a number of interesting art and crafts shops specialising in leather, pottery, woodcraft, glass and country crafts. The first building was completed in 1906 as the home of the Upper Bellingen Dairy Co-Operative. In 1919 it expanded with the inclusion of a bacon factory. In 1924 however, due to strict regulations placed on butter production, it was pulled down and replaced. It eventually closed down in 1963 and some years later was revived as a craft centre.

Walk 2: Bellingen Northside - Island, Rainforest & Flying Fox Walk
The walk starts at the reserve on the north side of Lavender Bridge, takes 60-120 minutes, is an easy walk traversing approximately 4 km. Its main features are "the only remnant of this type of Subtropical Rainforest on the floodplain remaining in the Bellinger River Valley. Also an important maternity colony of Grey-headed Flying Fox on Bellinger Island. The rainforest community and the flying fox are listed as endangered. The cemetery at the end of Lyons Road includes:

David Helfgott, George Negus and Bellingen
To the north of the town lie the tiny settlements of  Hydes Creek, Gleniffer and Promised Land which have all been made famous by a small group of well-known personalities including the well-known television personality, George Negus (he is still seen often in the town) and the concert pianist David Helfgott who was the subject of the movie Shine. Locals who live out Helfgott's way can recall seeing Helfgott walking naked along the road after going for a swim in the nearby creek. Today, as he gets older, he is rarely seen in town although his wife Gillian comes into town on a regular basis.

Walk 3: Rotary Lookout and Tarkeeth State Forest Circuit
This is an excellent walk for those wanting an overview of the entire Bellinger Valley. It is ranked as a medium difficulty walk covering 7 km, taking 2-3 hours and departing from the main street and heading south. For a detailed map check out http://www.bellingen.com/town-walks.html.

* Prior to European settlement the Bellingen area was inhabited by the Gumbaynggirr First Nation people.

* The Land Commissioner for the Macleay, Henry Oates, officially used the term "Bellinger River" in documents in 1840.

* In 1842 the Northumberland crossed the bar at the site of modern day Urunga. It was the beginning of an active trade in cedar with timber workers cutting the trees and waiting for the floods to carry them down to the river mouth.

* As the cutters cleared the land, farmers moved into the valley and grew maize and grazed dairy cattle and sheep.

* By 1842 Hodgkinson had reported: "The brush contained the finest cedar and rosewood I have ever seen."

* The growth of cedar cutting throughout the 1840s was dramatic with 20 pit sawers operating along the river by 1843.

* So determined were the Gumbaynggar people to keep the cedar cutters and explorers off their land that they regularly attacked the camps.

* In 1845 it was estimated that there were 300 Aborigines living in the Bellinger Valley.

* So rich was the area in cedar that it was estimated that over 2 million super feet of cedar were being extracted each year.

* The valley was progressively settled throughout the 1850s.

* By 1857 the North Coast Steam Navigation Coy. had been established.

* By 1865 there was a pilot station to guide ships through the Bellinger Heads.

* In 1869 both the Police Station and the Court House were built in Bellingen and this largely determined the town's importance.

* The 1870s saw the building of the Bellinger Public School (1870) and the establishment of a Post Office at Boat Harbour (1871) although the name 'Boat Harbour' was officially changed to Bellingen in 1870.

* In 1876 a road through the valley and up to Dorrigo was being surveyed.

* In 1876 the Sydney Morning Herald reported "There are two townships, Fernmount and Boat Harbour; at the former there are two stores, a church, public school, two public houses and boot store. The principal storekeeper is Mr Pulsford who is also the postmaster and a J.P. The police court, a neat and commodious building, is situated at Boat Harbour, and is presided over by Capt. Fisher, P.M., who, I am informed, has managed since his appointment to reduce the work of the office very considerably simply by advising litigants to settle their differences, if possible, without making public spectacles of themselves in a police court."

* By 1880 there were accessible roads throughout the valley and the road to Dorrigo was being cut up the mountain.

* The first Church of England was completed in 1896.

* In 1900 the town's most admired commercial building, Hammond & Wheatley's Store was established.

* By 1905 the Upper Bellingen Co-op Dairying Coy. was established and the shire was formally proclaimed in 1906.

* In 1909 a new Post Office had been built and that same year Hammond & Wheatley built the first concrete building in Australia. 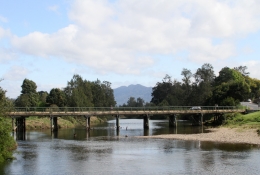 The bridge across the Bellinger River at Bellingen. 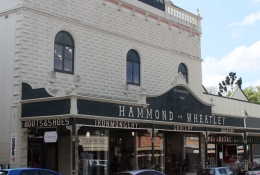 The famous Hammond and Wheatley Emporium (1900) with its antique department signs. 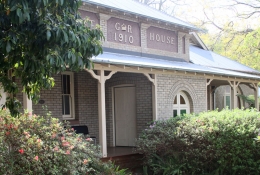 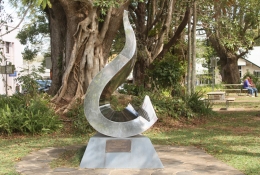 The sculpture in the Administration Centre gardens in Hyde Street. 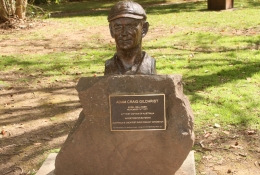 The bust of Adam Gilchrist in the Maam-Gaduying Meeting Place Park in Hyde Street. 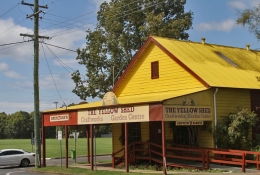 The famous Yellow Shed at the bottom of Hyde Street. 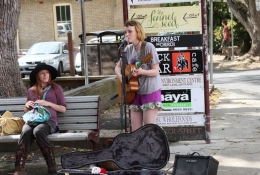 Busking in the main street of Bellingen on a Saturday morning. 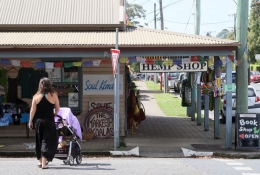 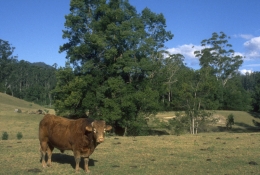