It is the most famous surfing beach in Australia. A world famous surfing destination, Bells Beach has been holding surfing competitions since 1961 and over more than half a century it has built a reputation as the location of the oldest surfing carnival in the world and an important place on the Victorian Heritage Register because it "comprises a high concentration of quality surfing spots from Southside to Steps Reef including Centreside, Bells (Rincon, The Bowl) and Winki Pop (Uppers and Lowers). Swells from the southern ocean slow and steepen over the reef strewn shallows to form consistent, rideable waves and the surrounding environment provides excellent viewing from a natural amphitheatre."

The world-famous surfing destination, Bells Beach, is located on the southern coast of Victoria, 107 km south-west of Melbourne and 10 km from Torquay.

The name was originally Bell's Beach because in the 1840s the first family to take up a pastoral run in the district were named Bell.

Surfing
Bells Beach is a small bay situated between two headlands. Its fame is a result of the swells from the Southern Ocean which produce outstanding surf. The consistency for which the beach is famed arises, in part, from the fact that the bottom is not especially sandy and hence is not prone to shifting sand bars which would create great variability. Combined with spring tides and a strong nor'westerly winds the waves can rise to five metres, although three to four is the average.

The Victorian Heritage, when recording the importance of the Bells Beach Surfing Recreation Reserve, noted: "Bells Beach Surfing Recreation Reserve, located about five kilometres southwest of Torquay, comprises a high concentration of quality surfing spots from Southside to Steps Reef including Centreside, Bells (Rincon, The Bowl) and Winki Pop (Uppers and Lowers). Swells from the southern ocean slow and steepen over the reef strewn shallows to form consistent, rideable waves and the surrounding environment provides excellent viewing from a natural amphitheatre. The roots of surfing in Victoria are in the Torquay/Surf Coast area beginning at Lorne in 1920." See http://vhd.heritage.vic.gov.au/vhd/heritagevic/?timeout=yes#detail_places;12711 for more details.

The Bells Beach Art Works
There are a number of important sculptures near the beach. Look out for the Wave sculpture, the Spirit of Surfing sandstone sculptures and the Aboriginal mural by local artists which is a significant cultural marker.

Easter Festival
Easter is the time for the Rip Curl Pro at Bells Beach. As the Rip Curl website points out: "Bells Beach is renowned for booming swells and the natural amphitheatre, where red clay cliffs drop into the powerful Great Southern Ocean, making an atmosphere unmatched anywhere in the world. The iconic event and Bells Trophy is one of the most sought after titles on surfing’s ASP World Championship tour and holds a proud place in surfing folklore.

"The Rip Curl Pro boasts an Honour Roll of Champions that includes surfing legends from Tom Curren to Mick Fanning and Layne Beachley to Carissa Moore. Only the world’s best win the Rip Curl Pro.

"'No kook has ever won at Bells,' Hawaiian surfer Shane Dorian declared after ringing the coveted bell trophy in 1999, and no kook ever will." Check out http://www.ripcurl.com.au/?aboutbells for dates and comprehensive information.

* Prior to European settlement the Bells Beach area was home to the Gulidjan Aboriginal people for tens of thousands of years.

* The first pastoral run in the area was taken up by John Calvert Bell in the 1840s and the beach was subsequently named after Bell's family.

* As early as 1939 surfers from the Torquay SLSC were travelling to Bells Beach because of its excellent waves.

* In 1949 Vic Tantau, Peter Troy and Owen Yateman recognised the potential of the beach but struggled with access. At that time surfers drove down an old road and then had a 45 minutes walk of the beach. Light boards did not exist and the surfers had to lug heavy 5-metre boards through the bush. Eventually devices, including rubber mats, were devised to make the journey easier.

* In 1957 shorter boards began to be produced and although the route to the beach remained difficult surfers came in increasing numbers.

* By 1958 surfers had persuaded a local landowner to provide road access but this was never satisfactory. Some surfers did not bother to close the gates and the farmer was less than enthusiastic.

* By 1959 Torquay surfer and Olympic wrestler Joe Sweeney, determined to solve the problem, hired a bulldozer and cleared a road along the Bells cliff from the old Cobb & Co Road. This meant that access was achieved from Jan Juc. Sweeney charged £1 per surfer to recover his expenses.

* The first surfing contest at Bells Beach was organised by Vic Tantau and Peter Troy and held on the Australia Day weekend in January 1961.

* The competition changed to Easter in 1962. It is now the longest-running professional surfing event in Australia and the world.

* In 1966 Bells Beach was one of the many beaches featured in the famous surfing movie, The Endless Summer.

* In 1970 Bells Beach became the setting for the world amateur board-riding championships. It has since become a regular fixture on the world professional circuit.

* In 1973 the Bells Beach Surfing Recreation Reserve was officially declared. It was the first in the world.

* In 1981 the Bells Beach competition had to deal with 6 metre waves. It was won by Simon Anderson on a three-finned Thruster board.

* In 1988 an environmental group, Surfers Appreciating the Natural Environment (SANE) was formed to protect the beach and the hinterland.

* In 2000 Bells Beach was listed as a site of historical significance by the Victorian branch of the National Trust.

The reason for the Heritage listing of Bells Beach is explained at http://vhd.heritage.vic.gov.au/vhd/heritagevic/?timeout=yes#detail_places;12711 and Rip Curl has all the information about the Easter Carnival - http://www.ripcurl.com.au/?aboutbells. 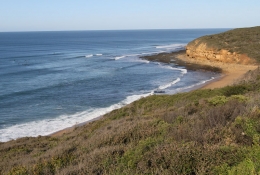 The view from the road above Bells Beach 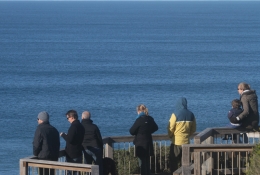 Watching the surfers at Bells Beach on a cold, winter day. 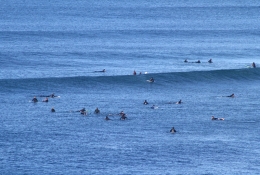 Things can get a little crowded at Bells Beach 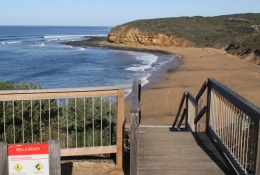 The stairs down to Bells Beach. 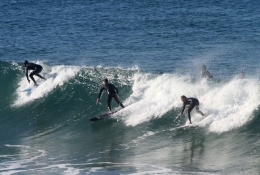 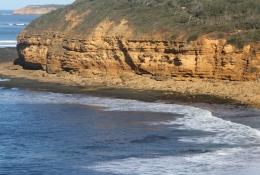 The headland at the southern end of Bells Beach. 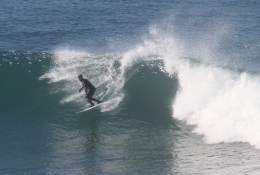 Yes ... the surf really is amazing at Bells Beach.