There is a complexity about Lake Macquarie. The towns-villages all blur together and dissolve into the suburbs of southern Newcastle. Belmont is a suitable case. It is a kind of southern suburb of Newcastle and also a tourist and holiday destination. There are boats moored near the shores on the eastern side of Lake Macquarie. Boating, fishing and swimming are popular. And nearby the beach at Redhead and the Belmont Wetlands State Park are magnets for visitors wanting to escape from the crowds on the Newcastle beaches.

Belmont, a town on the shores of Lake Macquarie, is located 136 km north of Sydney via the Pacific Highway.

In 1863 an immigrant from the Shetland Islands off the coast of Scotland, Thomas Williamson bought 100 acres of land where, later in the decade, he built a weatherboard guesthouse which he named Belmont. It is said that he named the guesthouse after his birthplace.

Anderson Point and Cane Point
Much of Belmont Bay is eddged by housing but there are two accessible points for the visitor. Andersons Point and Cane Point, to the south of the town, are small peninsulas which jut into the waters of Lake Macquarie on three sides, with a caravan park, a boat ramp, and fine views. They are ideal for leisurely walks and picnics.

Belmont Wetlands State Park
The Belmont Wetlands State Park, which lies between the town and the beach, is a 514 ha site which was sold to the State Government by BHP in 2002 after their sand mining operations stopped. It became a Wetlands Reserve in 2006. Today the area is known for its pleasant bushwalking tracks; mountain bike riding on the fire trails; camping, birdwatching, swimming and 4WD driving. The main appeal is walking and there are five tracks in the park. The website explains:
" Sand Plains Loop - A long walk through the central dunes, mostly sand, and a medium to difficult walk.
Wildflower Walk - This short walk runs parallel to the Fernleigh Track. The surrounding vegetation provides a beautiful display of flowers during parts of the year. This walk is flat and easy however it is sand.
Fernleigh Track - The famous Fernleigh Track follows a disused coal rail line. It is sealed and suitable for all users. The track is a dual use so bicycles and walkers share the track.
Gilbey Track - The short walk provides a beautiful close views of the Jewells Wetlands. It has a wide diversity of animals and vegetation. It is fairly flat and can be walked by all users.
Jewells to Dunes - this is a longer walk of moderate difficulty for walkers wishing to head to Nine Mile Beach. It extends from the Gilbey Track and heads up into the sand dunes surrounded by a variety of dune vegetation. It has excellent views of Nine Mile Beach." For more detailed information check out http://www.belmontwetlands.com.au/.

Redhead Beach
A quiet and impressive coastal gem, Redhead Beach offers superb views across the Tasman Sea, is rarely crowded, and has a unique lifesaving "shark tower" which is perched on top of the rocks in the middle of the beach.

* The first survey of the land around Belmont occurred in 1861.

* In the 1860s Williamson built a weatherboard guesthouse which he named 'Belmont'  after his birthplace on the island of Unst. He subsequently built the Belmont Hotel.

* The first town allotments went on sale in 1868. They were sold at £6 per acre. They were purchased  by miners who worked at the collieries in the district.

* A private school opened on the Williamson property in 1873

* In 1909 the main section of Thomas Williamson's estate was auctioned. It became the central business district of Belmont.

* In 1916 Robert D Lewers, the Sydney manager of the Bank of London, bought a large block of waterfront land and subdivided it. For many years the land was known as Lewers Estate.

* In 1925 Belmont Colliery opened. It was closed in 1980. That same year the John Darling Colliery, owned by BHP, started operations.

* Belmont became popular with industrial workers from Newcastle and it became known as the 'sanitarium of the north'.

* By 1937 there was a regular government bus service from Belmont to Newcastle.

* As Newcastle has continued to spread south, the desirability of lakeside residences has seen the population of Belmont greatly increase.

* In the 1970s the smaller coal mines in the area began to close. The last to close was the Belltop Colliery.

There is a detailed history of Belmont at https://history.lakemac.com.au/page-local-history.aspx?pid=1085&vid=20&tmpt=narrative&narid=8. 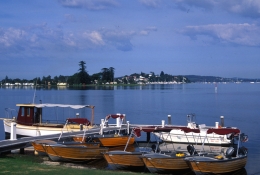 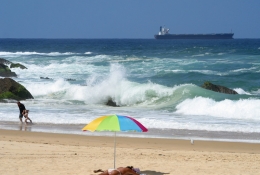 The beach at Redhead. 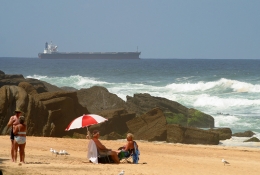 The beach at Redhead with a container vessel lying offshore. 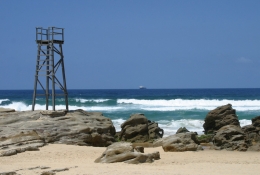 The historic "shark lookout" on the rocks at Redhead Beach. 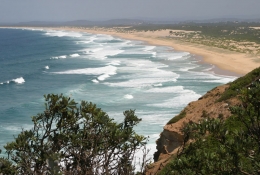 The view south from Redhead Point.