Small timber village at the foot of Brown Mountain

Bemboka is a small village 36 km west of Bega at the base of Brown Mountain. It was originally established to serve the needs of the local farmers and the travellers climbing or descending from the Monaro plains to the coast via the Brown Mountain Route. Today it is a small, but classic, town with nearly all the buildings being made out of timber.

Located 447 km south of Sydney via the Princes Highway or 475 km via the Hume Freeway  and Canberra, Bemboka is a small dairying village nestled in the hinterland west of Bega.

Bemboka was originally known as Colombo. It was surveyed in 1876 and it was changed to Bemboka in 1883. This was probably a result of the Imlay Brothers naming their property 'Old Bemboka". It was also known as Benbooka around this time.

Bemboka Pioneers Walk
The Bemboka Pioneers Walk honours the people who made Bemboka the town it is today. The plaques are positioned on a trail in Bemboka Park. The trail was officially opened in 1999. The people featured (all are depicted in digital images of historic photographs) Lucy Marks (1827-1891) who was the wife of John Marks. Lucy and John were the first European settlers in the district. They herded up to 40,000 sheep; George Ward (1840-1919) who became the overseer for Bemboka Station in 1862 - he was responsible for around 10,000 feral cattle; James Green (1833-1906) who was one of the town's first settlers; James Wilton (1835-1926) who was a local butcher who lived until he was 91; Arthur Alcock (1834-1906) who acquired large parcels of land in the valley; Ann Maria Alcock (1837-1918) who married James Green; Albert Rolfe (1879-1913) and American who settled in the valley - Yankees Flat and Yankees Gap are named after him; Joseph Walker (1821-1896) who purchased land at Polack's Flat; James Carpenter (1865-1941) who owned the Old Bemboka property; George Irvin (1862-1930) who managed the West End Butter Factory; Michael Condon (1863-1955) who edited the Bemboka Advocate; William Brown (1874-1928) who emigrated from Ireland and settled in the valley; Walter Curry Allen (1865-1951) who ran the local General Store; and Daniel Finn (1861-1943 who promoted hydro electric power in the village. Check out http://www.bemboka.net/pioneerswalk.html for additional details and a plan of the park.

Bemboka River Reserve Walk
Access to the Bemboka River Reserve Walk is at Colombo Park which lies at the southern end of the town. There are well made tracks and all the trees are labelled with their names. There are two walks of different lengths (the longer one is about an hour) and the walks take you through different types of country …river bank, open woodland, native grasses particularly kangaroo grass. The details of the walking tracks are signposted after you initially cross the river. For more information check out https://bembokalandcare.files.wordpress.com/2015/09/brrproject2015.pdf which has a map and detailed descriptions of the fauna and flora to be seen on the walk.

Piper's Lookout and Cochrane's Dam
Located approximately 15 km from Bemboka on the road to Nimmitabel, Piper's Lookout is located at the edge of the coastal range escarpment and offers panoramic views of the entire Bega valley and out to the Pacific Ocean. It was named after Fred Piper in 1951 after he died while clearing snow from the road. It is an ideal place to stop while traversing Brown Mountain (1241 m). A bonus is that beyond the main lookout and the associated picnic area is a 500m boardwalk to two additional lookouts. The National Parks website describes the walk to the other lookouts as "While this isn’t quite a canopy walk, the descending slope beneath the boardwalk gives you the feeling of floating amongst the eucalypts and lush ferns. You can use the stairs to make a loop of the three lookouts." For more information check out http://www.nationalparks.nsw.gov.au/south-east-forests-national-park/pipers-lookout/lookout.

South East Forest National Park
Located south from Bemboka via Mogilla Road, the South East Forest National Park is a huge 115,177 ha park which combines five former national parks. To explore the park in detail check out http://www.nationalparks.nsw.gov.au/south-east-forests-national-park/travel-info. To visit Myrtle Mountain lookout follow the instructions. It is about half an hour from Bemboka.

* Prior to European occupation the area around Bemboka was inhabited by the Thuau community of the Yuin language group.

* A private subdivision called 'Lyttleton' was incorporated in 1923.

* Brown Mountain was first crossed in 1816 when a bridle path was constructed.

* In 1822 a mail service from Cooma to the coast crossed Brown Mountain. It became known as the 'Postman's Track'.

* The first European settlers in the area were the Imlay Brothers who established a cattle station which they named 'Old Bemboka' in the 1830s.

* In 1844 George Robinson, known as the Chief Protector of Aborigines, travelled from Twofold Bay up Brown Mountain to Nimmitabel.

* In May, 1852 John Marks and his family arrived at Polacks Flat and occupied holdings previously owned by the Imlay Brothers.

* The 1859 Election Roll recorded only two men living in the Bemboka area. Around this time there were 10,000 cattle in the area.

* The township was surveyed in 1876 and officially recognised in 1877.

* By the early 1900s Bemboka had cheese and butter factories operating, hotels and other shops.

* Today it is a classic Australian timber town with nearly all the buildings being made out of timber.

There are two useful websites. Check out http://thebegavalley.org.au/bemboka.html and http://www.bemboka.net. 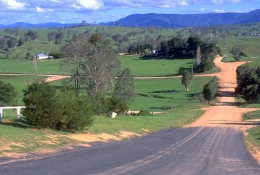 Looking south from the main street in Bemboka 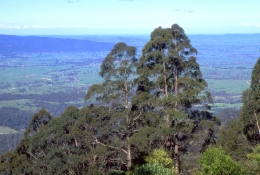 The view across the valley towards the ocean from Pipers Lookout.