Bendemeer is a small village located on the Macdonald River, between Tamworth and Armidale. The straggling, held-in-aspic, township has been bypassed by the New England Highway making it an ideal location to stop for a drink or a picnic.

The small village of Bendemeer is located 444 km north of Sydney via Tamworth. It is at the junction of the Oxley and New England Highways.

The town's original name was Macdonald River. In 1853 it was changed to Bendemeer after a river that flows near the ruins of Chilminar in Iran. Thomas Perry, the founder of Bendemeer Station, was a descendent of Captain Perry who, in turn, was a friend of Sir Thomas Moore, the author of the famous poem Lalla Rookh in which appears the following line "There's a bower of roses by Bendemeer's stream."

Town Walk
Today Bendemeer, which was originally located on the New England Highway, has been bypassed so that this rather straggling town is quiet, rustic and sleepy. It is an ideal place to stop on the drive north. The gabled general store and adjoining stable date from around 1870. St Andrew's Uniting Church was built in 1867 and was originally a Presbyterian Church. The main appeal lies in the sleepy town's location beside the Macdonald River which makes it ideal for picnics, swimming, fossicking, trout fishing and camping.

The Thunderbolt Connection and Bendemeer Cemetery
Bendemeer has the dubious distinction of being one of the first places that Captain Thunderbolt robbed. In 1864 he held up the Northern Mail. To add to this the local cemetery, in Caroline Street, plays an amusing part in the myth that Thunderbolt is not buried at Uralla but that the grave contains the remains of Thunderbolt's brother and that Frederick Ward (Captain Thunderbolt) escaped to North America. The story goes: "Alf Dorrington from Dungowan near Uralla offered to take Fred Ward, his mother Sarah Ann Shepherd and Fred Jnr to Morpeth, near Newcastle in late August 1870, from where he could catch a boat to America. As a payment for his services Fred gave Alf a large amount of money which he used to buy a headstone on his recently deceased Aunties [sic] grave at Bendemere [sic]. If one checks the Bendemere Cemetery you will find that this tombstone is still the best tombstone in the entire cemetery. An 1871 American state census shows that a Frederick Ward (file #SC 289) and a Sarah Shepherd (file #SC 319) both arrived in America in late 1870. This seems to be an amazing coincidence. Sarah Shepherd was the mother of Fred Ward … It is obvious that these two people are our Fred Ward & his mother, Sarah, who went to America in late 1870 and then moved on to Canada. When the gold petered out in California Fred moved to Alberta, Canada, where he stayed until the end of the gold rush there in the late 1800’s, then moved to live out his life in Ottawa, Canada - dying in the early 1900’s.” So, if you are keen, check out the "best tombstone in the entire cemetery", see if it dates from around 1870 (the oldest grave in the cemetery dates from 1873) and see if there is any evidence it is an aunt of Alf Dorrington. For more information about Bendemeer Cemetery check out http://austcemindex.com/cemetery.php?id=152.

Grey Fergie Muster
The Ferguson TE20 tractor was manufactured between 1946-1959 and painted grey because of paint restrictions after World War II. It is a classic rural workhorse and many are still being used on farms in the area. In 2003 some locals decided to have a muster of old grey Fergies and since then the event has occurred at Bendemeer every three years. Check out the details http://www.greyfergietractormuster.com.au. It is really an excuse for showing off old tractors, having a drink at the Bendemeer Hotel and listening to some local bush poetry.

* Prior to the arrival of Europeans the area was occupied by members of the Kamilaroi Aboriginal language group.

* The first European to travel across the Moonbi Ranges was Edward Gostwyck Cory who took up a run at what is now Uralla around 1832 or 1833.

* A run was taken up in the Bendemeer area in 1834 by a stockman named McDonald on behalf of Richard Wiseman.

* Stockmen and drovers who climbed the Moonbis and crossed into the Macdonald River valley began to water their stock before crossing the river. A village developed around this crossing point.

* In 1851 the postal service was extended to Walcha and a local office was established and known as Macdonald River.

* In 1853 the post office changed its name to Bendemeer.

* The bushranger, Captain Thunderbolt, aka Fred Ward, held up the northern mail at Bendemeer in 1864.

* People started being buried in Bendemeer Cemetery around 1873.

* The present steel and timber truss bridge was opened in 1905.

* In 2012 the town was connected to the National Broadband Network.

There is no visitor information at Bendemeer. The closest is at Tamworth, 41 km south, at Tamworth Visitor Information Centre, corner The Ringers Road and New England Highwa, tel: (02) 6767 5300. 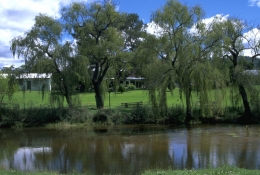 The Macdonald River and public park at Bendemeer. 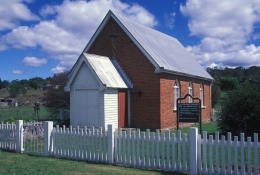 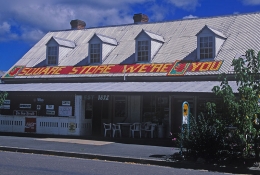