Village on the edge of the New South Wales snowfields.

Berridale is sometimes known, somewhat romantically, as the 'Crossroads of the Snowy'. In the 1850s when miners and prospectors were making their way to the goldfields at Adaminaby and Kiandra from the port at Twofold Bay (Eden as it is called today) they had to pass through the tiny village and hence the name. Today it is a small service town which lies on the main road between Cooma and the snowfields of Thredbo and Perisher Valley. It is 860 metres above sea level  and, as a wit in Jindabyne observed: "Berridale is the sort of town where if you blink you'll miss it but if you roar through you'll remember it forever because you'll probably get booked for exceeding the 60 km speed limit."

Berridale lies between Cooma and Jindabyne 432 km south-west of Sydney and 33 km from Cooma. It is 860 metres above sea level.

It is said that William Oliver, who settled the area in the early 1860s and built an inn at Berridale iin 1863, named the town after his home in Scotland.

The Poplar Drive
The main attraction of the town is the genuinely impressive poplar drive which, in autumn, has one of the finest stands of yellowing poplars anywhere in the Snowy Mountains. It is a reminder that the early settlers loved the trees of England and Scotland. There is a delightful plaque in Lions Park which records that in 2007: "Snowy River Shire Council commemorates local children who in the 1930s planted poplar trees lining Berridale's main thoroughfare. Under the tutelage of Mr G J Colditz, Berridale Public School students and other local children cultivated, planted and nurtured many of the established trees you will see in this area." It lists a total of 67 children.

Berridale Public School
Located in Oliver Street, the old schoolhouse dates from 1883 and is listed by the National Trust. Although the buildings have had extensions it is still possible to see the essence of a small country school at the end of the nineteenth century. Of particular interest is the gabled roof and the unusual curved corrugated iron roof. They are actually two separate buildings which have been joined together.

Aitchison Cottage
Very much a work in progress, Aitchison Cottage is being restored and, when it is completed, it will lay reasonable claim to being a building which started its life in the 1830s when a blacksmith first arrived in the settlement of Berridale. It was originally a slab hut but over the years it evolved into a comfortable small house which was occupied by the Aitchison family until the death of Mary Aitchison in 1954. From 1954 to 1983 the cottage was used as a boarding house. It was then sold to the Snowy River Shire Council. At the moment it is being restored by the volunteer work of the Aitchison Cottage Steering Committee. It is located behind the Lions Park with access from Jindabyne Road.

Snowy Vineyard Estate
The Snowy Vineyard Estate is located approximately 14 km outside Berridale and is actually positioned on the Snowy River. Established in the 1980s it proudly boasts that it is the highest vineyard in Australia. Not surprisingly the grapes are all cold climate varieties including "Sieger Rebe - the only commercial planting on mainland Australia!. An aromatic, early ripening fruit reaching its full ripeness two months before other grape varieties. Other varieties are Müller Thurgau, Sylvaner and Riesling." The cellar door is open from Wednesday to Sunday from 10.00 am - 5.00 pm and the restaurant is open on Saturdays and Sundays. Its setting, amongst the granite rocks on the banks of the upper limits of the Snowy River, make it seductively attractive in winter. Check out https://snowywines.fasthit.net or tel: 1300 766 608.

The Granite Outcrops
The road from Cooma to Jindabyne is characterised by impressive and unusual granite boulder outcrops. The geology of these unique and impressive outcrops is that they crystallised as a large mass from magma many kilometres below the Earth's surface and the granite formed around 400 million years ago. Over millions of years the granite was eroded and uplifted and it became exposed at the surface.

Eucumbene Trout Farm
The Eucumbene Trout Farm is located 22 km north of Berridale and offers an interesting trout fishing experience. As the farm explains on its website: "We will offer a premium fishing experience on our 6 hectare 'Stony Lake' and patrons in the absence of success at the lake have the opportunity to attend the 'sure catch tank'". There are also farm tours. It is located on Round Plain Road and is open Wednesday to Sunday during the Ski Season and every day during the NSW and ACT school holidays from 10.00 am - 4.00 pm. Tel: (02) 6456 8866 or check out http://www.eucumbenetroutfarm.com.

* Prior to the arrival of Europeans the area was home to small numbers of Yuin and Ngarigo Aborigines during the summer months.

* By 1828 Europeans had moved into the area and the Gegedzerick Station had been established.

* In 1835 Coolamatong Station was established where the town currently sits.

* By 1838 Mick the Blacksmith was working in the district.

* In 1846 William Jardine, a Scottish immigrant, settled at Round Plain. He called his property Bullenbalong.

* Berridale was first settled in 1863 when William Oliver selected land in the area.

* Oliver built a house in 1863 which became the Berridale Store in 1869. The site of the original building is now Berridale Inn on the Jindabyne Road.

* William Oliver named the town after his home in Scotland - Berriedale in Caithness.

* The Berridale Public School was established in 1883.

* The town was the site of a famous air crash during World War II when a USAAF P-40E landed at Wheat Hill station.

* In the 1950s the Snowy Mountains Authority, while building dams in the area, established a work camp in the town.

* The Eucumbene Trout Farm was started in 1973.

* The Snowy Vineyard Estate was established in the 1980s.

* In 1983 the Snowy River Shire Council purchased the Aitchson Cottage.

The Snowy Mountains website has a small amount of information on the town. Check out http://www.snowymountains.com.au/town/berridale. 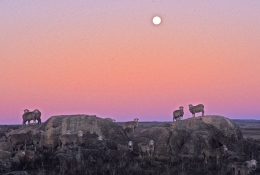 Sheep on a granite outcrop between Berridale and Cooma 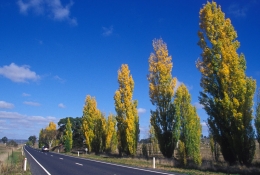 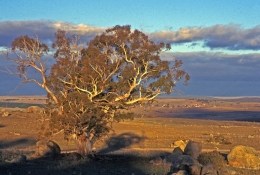 Late afternoon looking across the paddocks towards the Snowy River from Berridale. 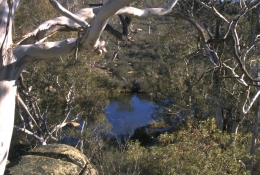 The Snowy River from the veranda at the Snowy Vineyard Estate. 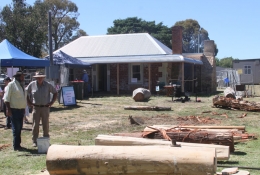 The Aitchison Cottage - a work in progress. 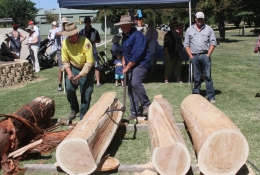 Making slabs for the Aitchison Cottage - the traditional way.